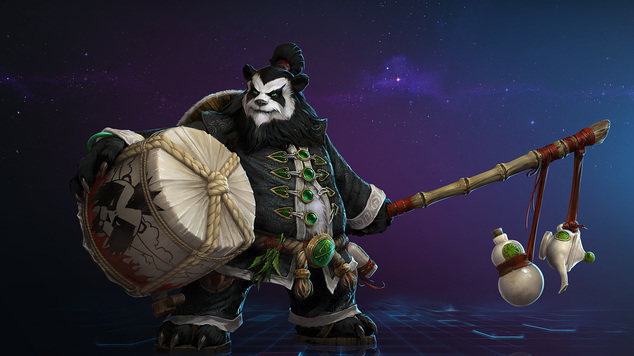 In this Chen Build Guide, we provide an overview of his strengths, abilities, talents and matchups.

Chen is a very unique bruiser and in the right hands, is incredibly powerful. He can be a formidable bruiser that can cause havoc in the enemy backline through his mobility and sustain. Chen is a very strong second frontline, allowing your main tank to peel and set up kills while Chen disrupts the enemy team. If they ignore him he can deal some significant damage but is not going to burst anyone.

Fortifying Brew (Trait) - Chen's Trait is a large part of what makes him such a unique Hero. Being able to use your abilities, drink from your keg to gain a large shield, then use your abilities again gives Chen a fantastic laning phase. If you’re able to channel uninterrupted, it also means you can soak up a lot of damage in a team fight. The shield returned is enormous as long as he isn't interrupted and can sustain himself for a long time against multiple targets.

Flying Kick (Q) - Flying Kick is a great tool to either catch someone out, or initiate a team fight. Flying Kick places Chen on the opposite side of the enemy you hit, allowing to body block them, keeping them stuck for much longer. Chen relies massively on Flying Kick to stick on enemies. Effective use of the ability is key to locking down high value targets, or retreating when needed.

Keg Smash (W) - Keg Smash is a short ranged AoE ability that deals a small amount of damage. The most important part is the slow, which can be quite beneficial, and the fact that it soaks everything hit with Brew. Combined with Breath of Fire, this can quickly clear minion waves, or put down some meaningful damage on multiple enemies in a team fight. It's best used after immediately after Flying Kick for maximum pressure. It's also important to note that Keg Smash is replaced with Breath of Fire after use (see below)

Breath of Fire (W) - This ability becomes available after using Keg Smash. On its own, Breath of Fire doesn’t deal a lot of damage. However, any enemies soaked in Brew from Keg Smash will take the damage again, over 3 seconds. This can help clear minion waves, or apply a DoT effect on several enemies during a team fight. Due to all of Chen’s abilities having the same cooldown, you’ll be looking to Flying Kick in, Keg Smash on your opponents, then immediately Breath of Fire them to get the most damage possible. Try to always keep the DoT on enemies as nuch as possible.

Stagger (E) - A powerful ability which allows Chen to mitigate incoming damage, Stagger is an important mechanic for his survivability. It effectively breaks down his damage received, similar to Monks in World of Warcraft, so that it's stretched over time, rather than immediately. This makes healing him far easier. As an example, instead of received 500 damage instantly, he receives 375 damage over 5 seconds; 75 damage per second. This is far easier for him and his team to mitigate, and when combined with self-healing Talents, ensures he can withstand significant damage.

Wandering Keg (R) - Wandering Keg allows Chen to become an Unstoppable barrel, knocking enemies back that he comes in contact with. It’s useful for isolating a priority target, zoning out the other team’s back line during a team fight, or to even interrupt/steal merc camps (or bosses, if your timing is excellent.) You can use this to your advantage on any map with a boss. Be aware however that you can still take damage as a Wandering Keg and against a coordinated team, this can see you killed very quickly.

Storm, Earth, Fire (R) - Storm, Earth, Fire is a safe heroic that allows Chen to transform into three spirits each with their own ability and health pool. Ideally you want to use this after you have absorbed a ton of damage with Stagger as transforming into Storm, Earth, Fire will clear the DoT from Stagger. Once it’s in effect, you’ll essentially have 3 mini-Chens. This can be useful, as the other team can either ignore you and constantly take damage, or try to take out your 3 spirits. Storm, Earth, Fire also provides you with a good amount of survivability and mobility. This can be a great tool to significantly increase your survivability as well as increase your DPS for a short while. Just be aware that if all three of your spirits die, so will you. 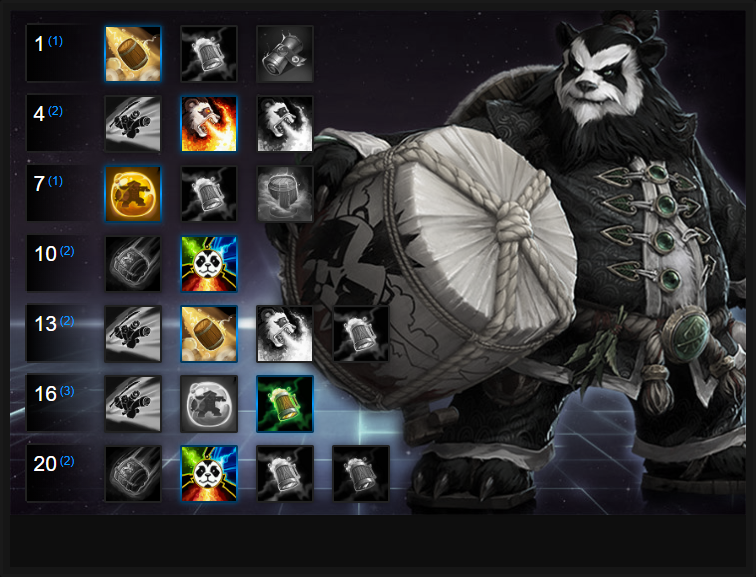 Level 1: Eye of the Tiger

Eye of the Tiger lets Chen deal 50% more damage to Brew soaked enemies, and allows him to heal for 50% of the damage dealt. It's fairly significant (at around 70 health per hit) and provides significant sustain, to mitigate incoming damage. It also allows him to pressure a little bit more.

The damage option, Accumulating Flame allows Chen's Breath of Fire to last 25% longer, while allowing his basic attacks to extend its duration by almost a second. For maintaining pressure on a target, it's fantastic.

The sustain option, Gift of the Ox increases the duration of Stagger by 0.5 seconds but also sees the damage reduced to 60% (rather than 75%). An amazing option for even greater survivability.

Storm, Earth, Fire is the safe Heroic that is great is most situations simply because it provides so much utility, damage and survivability. You can use it to escape, engage and still deal some damage in the process. Unlike Wandering Keg it doesn't bring crowd control, but does make Chen incredibly difficult to kill. Used after Stagger can remove the DoT from Stagger, allowing you to negate massive amounts of damage.

Building on Eye of the Tiger, A Touch of Honey increases your Keg Smash slow by 15% and duration by 0.5 seconds. This empowered your main form of CC and can make you even more annoying for the enemy team.

Combo Strikes is yet another Talent for basic attacks, and allows Chen to deal 75% bonus damage every third attack (which also pairs into Eye of the Tiger). If you also have Fortifying Brew, you gain 50% increased attack speed.

Elemental Conduit boosts Storm, Earth, Fire, empowering all of their abilities and increases the spirits health to 100% of Chen's health. This can make you nigh unkillable during Storm, Earth, Fire and make you a force to be reckoned with.

Against a CC heavy composition, Purifying Brew can allow you to drink in the middle of the enemy team even if they are looking to cancel it. it grants Unstoppable for 1.5 seconds, allowing at least the beginning of your Fortifying Brew to happen unimpeded.

These Hero Threat Levels (1 being lowest threat and 10 being highest threat) are to help you determine which enemy Heroes can give you a headache. For the Heroes listed here, take extra care as they're particularly dangerous for Chen.

This list of tips and tricks are just a handful of things we think will help your Chen play. We'll continue to add to the list as required and if you have any tips you'd like to share, let us know in the comments below and we'll place them here.

1. Weave Purifying Brew into your attacks to make sure you have energy and sustain to continue the fight.

2. Flying Kick is your main form of mobility. Position around enemies to give yourself options of targets to jump to.

3. Fortifying Brew can be used before you jump in to start the fight with some sizable shields.

4. Chen lacks hard CC to disrupt enemies. Instead, stay close and pressure the enemy backline through your consistent damage.

5. The Stagger DoT can be sustained through by your Fortifying Brew.

6. Storm, Earth, Fire, removes all negative effects when you transform.

7. Don't spent too much time drinking Fortifying Brew or enemies will just ignore you and kill your team.