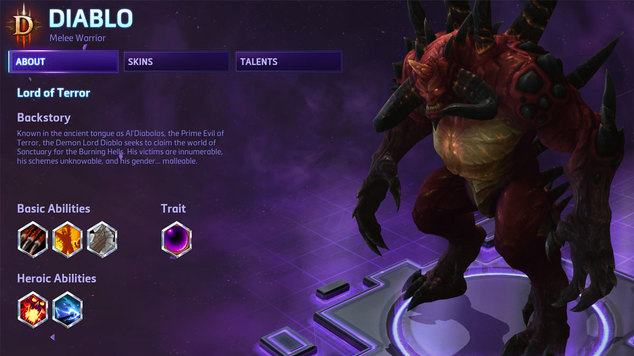 It should come as no surprise that Diablo, is a character from the Diablo series of games.  In Heroes of the Storm he plays as a Melee Warrior that has a lot of health and can dish out stuns and can move enemies around.  He does however not do a lot of damage on his own and cannot escape very often, therefore he really needs to be played with someone else nearby.  Due to his stuns and CC though he is often the character that sets up kills, he just may not complete many on his own.

Shadow Charge (Q) [10 second cooldown] – Charges an enemy dealing damage to them and stunning them for 0.5 seconds.  If you charge them into an object the stun is 1 second.

Fire Stomp (W) [6 second cooldown] – Sends flames in all directions dealing a small amount of damage to al enemies around you.

Overpower (E) [12 second cooldown] – This ability grabs the target and slams them down behind you, dealing damage and stunning them for 0.25 seconds.

Apocalypse (R) [120 second cooldown] – This ability is the first of two options that you get at level 10.  It creates a demonic rune under all enemy heroes in the battleground and then after 2 seconds they explode dealing damage and stunning them for 2 seconds.

Lightning Breath (R) [60 second cooldown] – This is the second of the level 10 options.  This attack allows you to channel lighting that deals significant damage over 4 seconds.  It can be aimed while channelling it.

Black Soulstone (Passive) – This is a passive ability allows you to collect souls.  You collect 10 souls per hero kill or 1 per minion and stacks up to 100.  Each soul grants you extra health.  If you have 100 souls when you die, you will resurrect in 5 seconds instead of the normal time, but you will lose those souls.

At the first level there is only one really good choice. While you could take Block to reduce damage or Soul Steal to gain souls faster, neither is really exciting.  The best of the lot is Soul Feast as it effectively doubles your Black Soulstone health buff and adds in some extra mana regen to boot.

There are a few good options here, and I flip between them depending if I am playing with a pre-made team or not.  With a team, Amplified Healing is by far the best ability due to Diablo’s large health pool and low escape options.  I know its not exciting, but staying alive wins games.  If I am not with a group (or with a pug that has no healer) then I take either Swallowing Flames or Demonic Strength for more damage output.

All three talents here are decent options, but my favourite is Battle Momentum.  This ability reduces your cooldowns by 0.5 seconds per basic attack.  This means that you can use your big cooldowns far more often than they normally could, heck even being able to Overpower more often is extremely useful.

At this level you gain access to either Apocalypse or Lightning Breath.  While many people are tempted by the higher damage of Lightning Breath, it is the inferior talent by quite a bit. Apocalypse may not deal as much damage, but the ability to hit every enemy no matter where they are (or you are) on the battlefield for damage and a stun is devastating.  The stun that it causes can quickly lead to your team dominating in a team fight, even if you are not there!  How many other abilities in the game allow you to set that up, not many.

This level has only one really great talent and that is Relentless.  It gives you a passive ability to reduce the duration of all stuns, CC, or slows by 50%.  Since Diablo has such limited escape options, and needs to be moving to get to where he is needed, this is a critical talent.

This level has two good options, and which you take again depends on your team.  If you need more damage output then Firestorm is the clear winner at this level since it increases your damage dramatically.  If however your team can already deal a lot of damage, then the better option is Continuous Overpower, which allows you to have 2 Overpower charges, and to keep pulling the enemy where you want them.  My preference is the extra overpower, but it really comes down to how your team is doing in that match so far and what would help them more.

Your top level talents provide some really good options, however it is important to understand that one of them does not.  I see many players take Dying Breath simply because it gets them another Apocalypse when they die, however that rarely does anything useful, but they take it anyway.  The real options here are the generic Storm Shield or Bolt of the Storm.  If your team lacks other shield options then it’s a good idea for you to pick it up as it can save your team in many different situations.  If someone else can grab it, or another shield ability, then Bolt of the Storm is a much better option.  It allows you to escape from fights and stay alive, which is one of Diablo’s biggest weaknesses.  Sure it may not be exciting, like extra damage is, but if you stay alive you can do a lot more damage overall.

Playing Diablo is all about positional awareness and setting up fights.  While he does not put out a lot of damage on his own he is amazing at setting up kills on the enemy or preventing kills on your party.

This plays true later on in a match as well, but by then it is purely about setting up or preventing kills, rather than soaking experience in a lane like it was in the early game.

Even though I mention that Diablo deals low amounts of damage, he can deal a lot of damage through the proper use of Apocalypse.  The key phrasing there is “proper use”, which is really hard to gage.  Most players want to use it any time they can to help finish off an opponent, however that generally just wastes the cooldown which is extremely long and then you will not have it when you could make the best use of it.  Used correctly though Apocalypse can devastate the enemy team.

So, just when is the proper time to use Apocalypse?  There are several times that it can and should be used, which all revolve around having groups of opponents all together.  This can be when you are in a group fight and they are all spread out, or when multiple opponents are chasing your group or fleeing from your group, and does not even have to happen while you are there since it affects everyone in the battleground.  Since the ability spawns the AOE under all players but has a delay before it deals damage, it can be easy to avoid if players are separate.  However, when there are groups of players all around each other, even if they avoid the AOE that formed under them, they are likely to run into an AOE from another player, thereby suffer it’s damage and stun.  This is the way you need to use it to maximize it’s effect.  Once you learn to wait with it and be patient, you will start to see the ideal times to use it, and really impact the flow of a game.