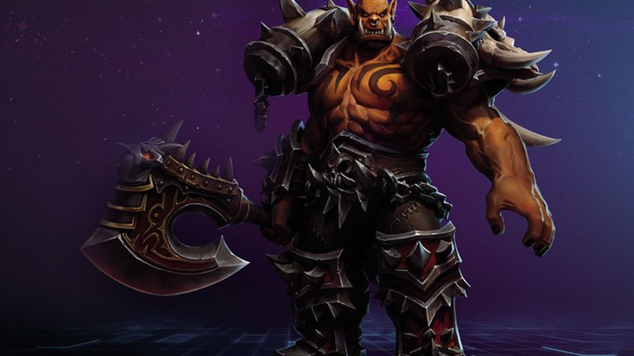 In this Garrosh Build Guide, we provide an overview of his strengths, abilities, talents and matchups.

Garrosh is slow but very threatening tank with the ability to displace enemy heroes. His passive grants him armor as he loses health, making him a very difficult tank to kill. Garrosh has a small stun and slow in Groundbreaker to allow him to reach and CC enemies. When he does, Wrecking Ball ensures that enemies go where Garrosh tells them to.

Although his kit appears relatively simplistic, the combination of managing his Groundbreaker effectively and throwing the right target at the right time with Wrecking Ball, makes Garrosh particularly challenging to play well. As a hero that's easily kited by ranged attackers if you do not have Groundbreaker available, you need to not only position well, but also keep an eye on your trait and your amount of armor. This Garrosh build aims to give you some new tricks when playing Garrosh.

Armor Up - Garrosh's Trait allows his to gain armor based a percentage of his missing health. The lower his health is, the more armor he has and the less damage he takes. Garrosh is able to obtain up to 49 armor before dying (effectively 1 health). With his Trait providing this level of mitigation against all damage types, he can be incredibly difficult to kill. Typically in a team fight, it's fairly easy for Garrosh to hover around the 30-35 armor mark, allowing him to take 30% less damage from all sources. If he then pairs with heroes that can sustain him at lower health pools (and higher armor), then he can be incredibly hard to kill. Be aware that just because you take less damage, doesn't mean you're invincible. If your armor is high, your health is low, meaning a quick burst from multiple sources can still finish you off.

Groundbreaker (Q) - This will be Garrosh's primary form of crowd control. Anyone caught on the tip of the telegraph (the very end), will be stunned immediately, before being slowed. This can be used to close the distance with enemies to look for a Wrecking Ball throw or to peel for allies. Always aim to stun enemies as the damage is fairly low. Taking a step away from enemies can allow you to land the stun if they are too close to you.

Bloodthirst (W) - Providing Garrosh with some much needed sustain and instant damage, Bloodthirst allows him to restore 10% of his missing health instantly. Garrosh can cast this on any enemy, though the healing value is doubled against heroes. You're free to use this ability as much as possible during early fighting, but as your health gets lower, it's best to save it until your health is very low to get the maximum heal and maximum value out of your passive armor.

Wrecking Ball (E) - Wrecking ball throws the closest enemy hero, minion, or mercenary to the location you choose. The closest target will always have a Horde icon on them to let you know who will be thrown if you choose to cast Wrecking ball. In a team fight where enemy heroes are grouped together, or if minions are nearby, it can prove challenging to snag the hero you want. Keep in mind that there is value to holding on to Wrecking Ball. Once you throw an enemy, they no longer have to play around it for 16 seconds. If you wait for a good opportunity, you will secure a good throw and also force enemies to play around your throw until you decide the time is right.

Decimate - If your team has a hard time following up on a 2 second taunt and you are lacking damage. Decimate can allow Garrosh to push his own damage instead of relying on his team. The damage is not insane but with its three charges and short charge cooldown, Garrosh can cast Decimate very often, dealing considerable AoE damage if he can stay in the fray. This can also be used as an alternative for Groundbreaker to set up Wrecking Ball throws as the slow will let you close the distance between Garrosh and his target. 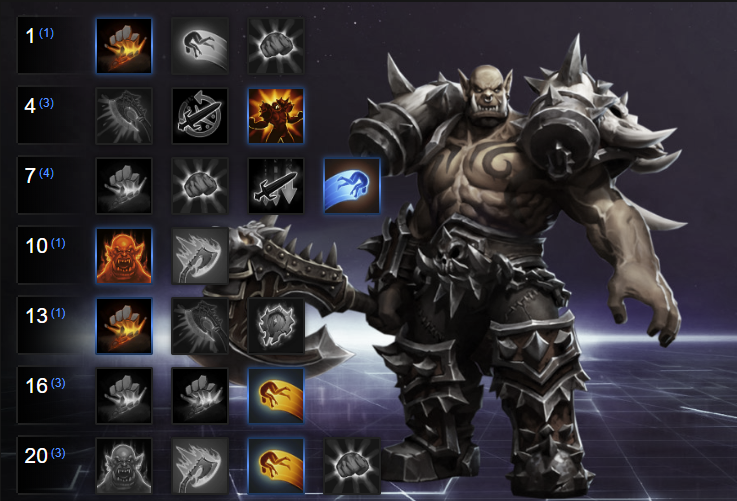 The extra damage and reduced cooldown on Groundbreaker allows Garrosh to pressure enemies far more often as well as add some extra DPS to fights where he often brings very little.

Indomitable allows Garrosh to become Unstoppable for 1.5 seconds on a 40 second cooldown. This can allow Garrosh to escape for stick situations or ignore the pitiful enemy CC as he strides towards an enemy for a Wrecking Ball throw.

Level 7: Into The Fray

Into the Fray throws an ally like you would an enemy with Wrecking ball, allowing you to save them from danger. It also makes the thrown ally Unstoppable while in the air, meaning that they are cleansed of all CC when they land. This effectively gives Garrosh a Cleanse that also repositions allies. A very valuable talent that is hard to pass up. If you trust your team to stay out of danger the other two talents on this tier can hinder enemies greatly.

Alternative - Intimidation (for when enemies love to auto attack)

Against a basic attack heavy composition intimidation can greatly reduce their effectiveness. When you use Groundbreaker, all enemies hit by it have their attack speed reduced by 40% for 4 seconds. Considering Groundbreaker can have its cooldown reduced to as little as 6 seconds, this can seriously restrict the damage potential of a team.

Alternative - Oppressor (for against teams with many mages)

Against an ability heavy composition, Oppressor can greatly reduce their effectiveness. When you use basic attacks against enemy heroes, you'll lower their Spell Power by 40% for 2.5 seconds. This duration buys you enough time to hit at least 2 players, causing a near permanent Spell Power debuff. This can reduce the damage of an enemy mage greatly or strangle the enemy team's healing.

If your team can follow up on Warlord's Challenge to secure a kill or you require more CC, Warlord's Challenge has you covered. This can secure a kill or peel for allies as well as giving enemies another thing to worry about. Keep in mind that you can taunt enemies as you throw them with Wrecking ball, keeping some of the more slippery heroes such as Tracer or Genji stuck.

Alternative - Decimate (for when you want to kill them yourself)

If your team does not have the damage to make sure of a 2 second taunt, Decimate can add some much needed DPS. Decimate can deal high damage to the enemy team if Garrosh is allowed to continue casting it in the middle of a fight. The slow is a nice bonus that can keep enemies from straying too far.

Allowing Garrosh to gain a ton of shields whenever he stuns an enemy hero with Groundbreaker. This can make Garrosh even harder to kill. Keep in mind that your passive armor affects your shields so the greater Garrosh's armor, the greater the effectiveness of your shield.

Earthshaker allows Garrosh to stun anyone he throws with Wrecking Ball. Although the stun is brief (0.5 seconds), it affects anyone caught near the impact. This adds a little extra CC to your kit as well as giving Garrosh the option to throw an enemy into their team, allowing you to walk up and use Warlord's Challenge.

Titanic Might allows Garrosh to throw two targets with Wrecking Ball instead of one. This negates the annoyance of having the enemy tank sit on you as you can just throw them and your target.

These Hero Threat Levels (1 being lowest threat and 10 being highest threat) are to help you determine which enemy Heroes can give you a headache. For the Heroes listed here, take extra care as they're particularly dangerous for Garrosh.

This list of tips and tricks are just a handful of things we think will help your Garrosh play. We'll continue to add to the list as required and if you have any tips you'd like to share, let us know in the comments below and we'll place them here.

1. Remember that your armor gain from your trait is directly linked to your lack of health. If you get too low, you can still be burst down.

2. Armor Up provides armor that mitigates damage from ALL sources, both physical and spell damage.

3. If you're starting a fight, don't be in a hurry to replenish your health with Bloodthirst. It's a good idea to let your trait stack up some so you can outlast the opposition by gaining armor first before using your heal. This will make the health gained even more valuable.

4. Groundbreaker will still deal damage even if you don't stun an enemy. The area it deals damage isn't small, so you can easily snag a few enemy heroes for some AoE pressure if you do not require the CC.

5. Ideally you want to be casting Groundbreaker to take into account the short delay. You should aim to stun, setting up your Wrecking Ball throw. Most heroes thrown can be easily bursted by your team.

6. Don't be afraid to use Groundbreaker to peel for a teammate under pressure. You don't always have to use it offensively.

7. Bloodthirst provides health return based on your missing health, not your maximum health pool. Used at relatively high health, it provides little healing.

8. With a 12 second cooldown, you cannot afford to waste Bloodthirst if you're below 50% health. You may need it if you quickly suffer damage. If you can, save it for when you're on about 15-20% health to ensure you get back up to a safe amount of health. Just make sure there is an enemy within melee range to use it on.

9. Bloodthirst is not just a good heal but can also be used for some extra instant damage if needed.

10.  If an enemy hero gets near one of your gates, use Wrecking Ball to throw them over it. They'll be trapped inside and your fort will help kill them.

11. Wrecking Ball can throw an enemy hero in any direction. If necessary, throw enemy heroes away from you to peel for yourself or your team.

12. Stay patient and wait for the Horde icon to appear on the target you want to throw. If you are too hasty you can easily throw a minion by accident.