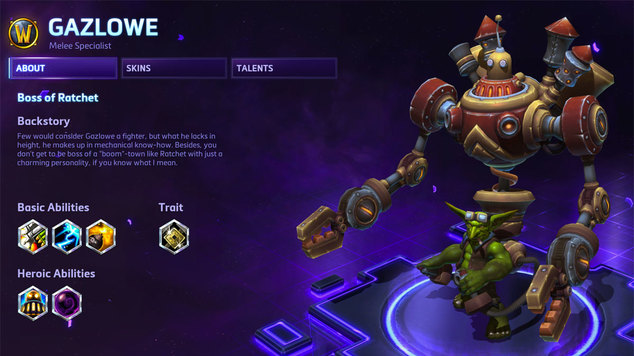 Gazlowe is a goblin character from World of Warcraft, that is basically a tinkerer or bodger, making things from scrap.  In Heroes of the Storm he is considered a melee specialist character, but honestly you don’t want him doing a lot of melee against other players.  Gazlowe can be played in multiple different ways as he can deal a lot of damage to structures and mercenaries, or deal with enemy players using turrets and bombs.  This guide will show both builds for determined by your talent choices, and talk about how to play either build as well. 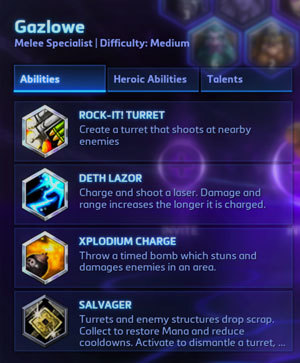 Rock-It! Turret (Q) [15 second cooldown] – This ability allows you to drop turrets that stay in place for 30 seconds and attack any enemy that comes near.  When they die they will drop scrap.

Deth Lazor (W) [15 second cooldown] – A skill shot ability that does more damage the longer you let it power up.  Deals damage to everything hit, but takes a long time to reach full damage.

Xplodium Charge (E) [12 second cooldown] – This ability places an AOE bomb on the ground that explodes 2 seconds later, dealing damage too and stunning all enemies in the area.

Grav-o-bomb 3000 (R) [110 second cooldown] – One of the two Heroic Abilities you get to choose from at level 10.  This sets up an AOE bomb that pulls players into the center and explodes for damage.

Robo-Goblin (R) [Passive] – One of the two Heroic Abilities you get to choose from at level 10.  This talent increases the basic attack damage you do to all mercs and structures by 150%, allowing you to burn through them insanely fast.

Salvager (D) [Active and Passive] – This talent passively causes scrap to drop from structures and turrets.  Each piece of scrap picked up grants mana and a speeds up the cooldown of your abilities. It can also be used actively to tear down turrets before you leave an area to gain scrap back.

At the first level there are a few good choices, the best is Extra TNT though.  It allows you to deal a lot more damage in more situations than anything else at this level and allows the setup of some crazy damage in the late game through combos.  The other decent options are Scrap-o-matic smelter since mana can be an issue for Gazlowe, or Demolitionist if you are going for a siege build.  My strong recommendation is still Extra TNT.

At this level most of the talents are really situational at best.  You can take almost anything at this level because none are super strong.  The best of them though is Reduce, Reuse, Recycle as it will give you additional mana over the course of a game.

At this level get a few choices that are viable.  If you are going with a siege build then the best choice is Mercenary Lord as it boosts the damage that any mercenaries do when you push with them.  If you are going for damage or team builds though then either of the turret improvements are much better for you.  My go to talent is the extra damage from Rock-It! Turret XL, but if the enemy team has a lot of melee characters then Engine Gunk can make a huge difference in a game by slowing them down all the time.

At this level you gain access to either Grav-o-bomb 3000 or Robo-Goblin which really defines your build.  If you want to push lanes and take out enemy buildings then Robo-Goblin is the way to go, as it boosts your damage against mercs and structures by a huge amount.  However, since most games revolve around a few big late game team fights, the better option is likely Grav-o-bomb 3000 as it can setup a huge combo and help win team fights.

At this level you really only have one choice, Kwik Release Charge, which grants you a second charge of Xplodium Charge.  This helps out in a lot of situations and helps with your combo immensely.

At this level again you only have one really solid choice, Turret Storage.  This allows you to store up to 4 turrets to drop, giving you a lot more options when you want to have a fight.  With 4 turrets around they can do a lot of damage to anyone.

The top level talents really depend on what you chose at level 10.  They match up and are obvious choices that make the level 10 choices far better than they are without these upgrades.

Gazlowe is a lot of fun to play, but takes a while to get used to, and even longer until you can play him well.  The issue for most players when first getting on him is that, even though is melee, you rarely want him to be in melee against opponents, which makes him very hard to come to grips with.

Before getting into the two main ways that Gazlowe can be played, I want to talk about one of the abilities that make Gazlowe such a good character, and different than other characters.  This difference is his ability to drop turrets, which deal damage even when he is not around them. These turrets will last for 30 seconds and deal damage to any enemy that comes in range.  Placed and used correctly these turrets will end up dealing most of your damage.  Turrets are best placed in bushes, fog or around corners where players or minions will not see them until they open fire.  However, it is important to not group them up for enemies to kill several at a time with AOE, so space them out.  Later in a game once you can place 4 of them rapidly, and once they slow enemies (depending on talent choices), it is possible to setup huge trap areas to lure unsuspecting enemies into for a kill.

No matter how Gazlowe specs, he gets to use turrets, but here is where we get into the two ways that he can be built.  The first is to focus on mercenaries and siege damage, and the second is to focus on turrets and their use.

If you build Gazlowe to go after mercenaries and siege damage then you can literally melt through the opponents forts.  Once you are able to deal 150% damage to mercenaries and structures, and then also allow mercenaries to deal 50% bonus damage, things just disappear. To do this you can walk into a mercenary camp, crush them and then escort them to the enemy towers and bases.  Setup turrets nearby to help protect them, and then rinse and repeat when they die. However since most opponents get wise to this quickly, and since you have no escapes, this only works well in random groups that are not very coordinated.  While a lot of fun, this builds use is pretty limited.  Therefore, I suggest a turret and Grav-o-bomb build.

To be the most use to your team, Gazlowe can be built to focus on turrets and control instead of pure siege damage.  It takes a little longer to get him really going, but one he does he can help setup kills on big numbers of enemies at once with a very cool and hugely damaging combo.  The combo is built around throwing an Xplodium Charge at the enemy, which would generally cause them to run, however you then lob a Grav-o-bomb 3000 at them which will pull them all into the Xplodium Charge and stun them.  With Xtra TNT as a talent, this will usually mean dealing 150% damage to them from the xplodium as well as the stun, and pulling them together for other members of your team to AOE them as well.  If you have several other players that deal AOE like Tassadar with Psionic Storm, Arthas with Howling Blast, ETC with Mosh Pit, or any number of other AOE abilities, the combo can quickly wipe all 5 enemy players.