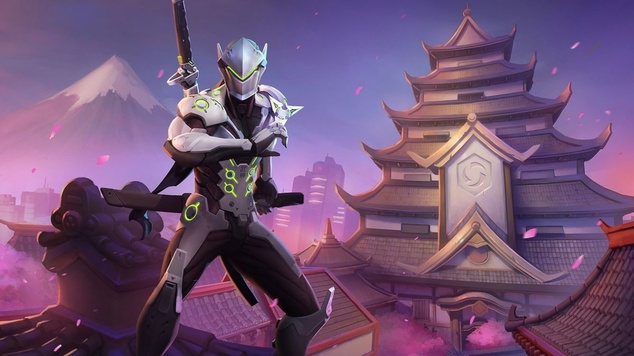 Genji is a short-range assassin that brings and unrivalled amount of utility and mobility. His kit is largely unchanged from Overwatch, though there are some key differences.

What's particularly interesting about Genji is that his kit lends himself to being a constant nuisance, rather than a hero who can immediately burst players down. The short-range on his basic attack means he has to get up close and personal, although the damage on these basics - even at level 20 - are pretty low. His Shurikan again lacks burst unless used at point-blank range while Swift Strike is as much for escaping as it is engaging and cutting through enemies.

I have to admit that in my time playing Genji, I've struggled to find a niche for him in the current meta. That could partly be through a lack of experience, but also because of his lack of burst doesn't neccesarily lend itself to how players play, right now. Despite that, he's exceptionally good 1 on 1 and Deflect alone can carry him pretty hard if he times it just right.

Cyber Agility - Genji's trait allows him to jump to any location of his choosing. The distance is long and the speed of his jump is fast. Unsurprisingly the jump also allows you to leap over terrain and immediately access locations other heroes can't. Its cooldown is fairly low (10 seconds) and it proves invaluable at escaping or engaging. Just be aware however that using Cyber Agility doesn't make you unstoppable. You can still be stunned, rooted or hit in the air by enemy players.

Shuriken (Q) - Shuriken has a similar telegraph to Nazeebo's Plague Toads. The three "prongs" are in a small arc and each shurikan fired out will strike the first enemy. Due to the nature of the telegraph, Shuriken is an AOE ability that can pressure a group when used from afar or deal high damage when used at point-blank range. With three charges, Shuriken can be spammed fairly easily as all charges return at once (over 12 seconds). However, its value is in a group fight where you can poke from afar, or after using Swift Strike so that when you're immediately next to someone, you can use them for maximum close-range damage. Finally, always try to keep 3 charges available for fights over Objectives - you'll need the damage and the aoe pressure.

Deflect (W) - The primary source of Genji's burst and survivability - certainly when being attacked - Deflect functions similarly to Medivh's Force of Will and provides immunity for 1.25 seconds. Any damage he blocks allows him to return fire by throwing a Kunai towards the nearest enemy. Each Kunai deals reasonable damage and will track towards a nearby hero. What's particularly potent about Deflect is the fact the number of Kunai released is based entirely on the speed of incoming damage. The more damage he suffers, the more he throws back. Against heroes such as Li Ming using Disintegrate or Tracer using her basic attacks, this can result in near instant death - especially if they're foolish enough to hit Genji while he's using his ability. If you can, try to save Deflect for those, "Oh shit!" moments, or when you truly want to punish someone 1 on 1.

Swift Strike (E) - This ability offers incredible amounts of mobility and zips Genji in a straight line, straight forward. With a fairly lengthy cooldown, it's important to gauge when you should be using the ability. Killing an enemy hero with it refunds the cooldown and mana cost but if you don't kill someone, you're potentially left with only your trait to escape. Despite that, Swift Strike proves an invaluable component for Genji, not just for escaping but harrassing the enemy backline, chasing down enemy players or avoiding key spikes of damage. What I've found particularly effective as Genji is to burst through a group of enemy players and once you've gone past them, to then use your trait to leap further away (to then reposition) or to double-back with a second Swift Strike if you've secured a kill.

Dragon Blade (Heroic) - Dragon Blade is Genji's most used Heroic simply because it gaurentees a lengthy period of damage output, that's also fairly forgiving. Cast in a wide arc, Dragonblade not only deals damage but also lunges Genji forwards ever-so-slightly. Best of all, Swift Strike has its cooldown reset if you kill someone within 2 seconds. Ideally you want to be using this heroic when the enemy team are grouped up, or when you've an opportunity to hit one or two at a time.

X-Strike (Heroic) -  A ranged alternative that provides near instant ground targetted damage, I've found X-Strike to be a fairly solid choice when opportunities to get in melee range are limited. I'll freely admit it's fairly difficult to land, especially because you want the slashes to hit your target (or targets) but you also want to ensure that those struke are in the detonation area. My best advice before leaping into using X-Strike in a live match is to practice it in the Try Mode with unlimited cooldowns so you can correctly judge its range, timing and eventual damage. 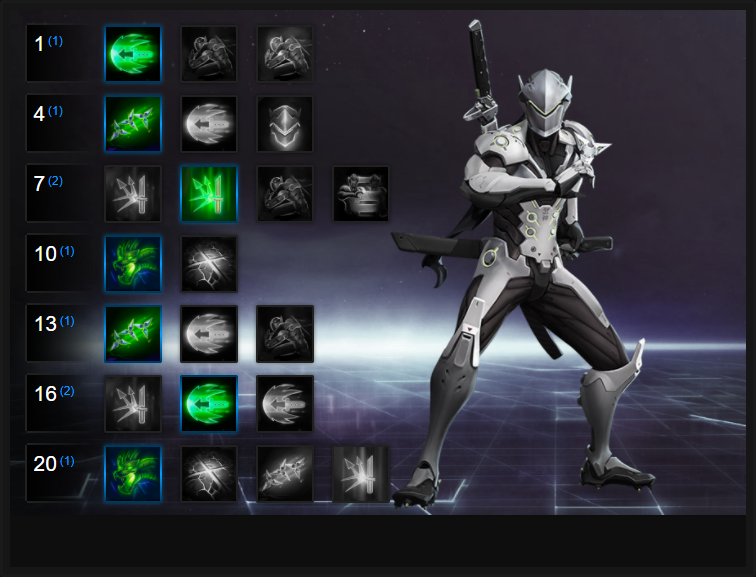 Level 1: Swift as the Wind

Of the three talents, I've had the most success with Swift as the Wind. On hitting an enemy hero it allows you to gain 30% additional movement speed for 3 seconds. Its duration isn't huge, but it's amazing for allowing you to reposition, chase or escape even better than you already can. I've found Swift as the Wind has allowed me to harrass much easier than the other alternatives.

Shuriken Mastery proves particularly useful for Genji because it not only allows him to deal greater damage with his Shuriken's (when he completes the quest) but it also allows him to replenish two charges when he uses Cyber Agility. It's an easy talent to complete and proves valuable for harrassing the enemy team when they're grouped up and for sustained damage after you've leapt to a new location.

There's a lot of good choices for Genji's level 7 talent, but I've found Perfect Defence to be the most useful. Deflecting damage will reduce the cooldown of Deflect by 2 seconds. Against multiple sources of damage, this can shave massive amounts of time off our primary means of mitigation. It also means you'll be dealing damage back at the enemy much more often.

Variable: Dodge can be fantastic against basic attack heavy compositions because it allows Genji to evade 1 basic attack every 8 seconds.

Purely because it allows Genji to deal consistent damage over several seconds, Dragonblade has a wide arc that can comfortably allow Genji to cut down multiple heroes (especially at level 20). Ideally, if he can be healed by Uther/Malfurion or Rehgar during his attack, he's incredibly difficult to bring down and can comfortably secure multiple kills if the enemy is already low health.

Variable: X-Strike is fantastic on objective heavy Battlegrounds (such as Infernal Shrines) as Genji doesn't always, neccesarily, have a way "in". Taking X-Strike allows him to attack from a distance, from relative safety, while stealing massive damage to anyone in its radius.

Both Shingan and Double Jump (below) work with this talent build, but Shingan has proved effective with my style of play. If you can Swift Strike up to an enemy, or Cyber Agility (or if you're simply next to them) landing all 3 Shuriken is fairly easy. The bonus damage, combined with your level 4 talent (when completed) allows for a fairly sizeable spike over 3 charges. Better still, you can also reset your charges with your trait.

Variable: Double Jump is similar to the above, but differs in the sense it provides a greater quantity of Shuriken. You gain two charges of your leap, which provides two charges each time you jump. Effectively, it increases your Shuriken count from 3, to 7. Although your trait cooldown will be longer (by 5 seconds) it's nothing to worry about. Realistically, you should only be using Cyber Agility in team fights anyway.

Final Cut allows Genji to perform a second Swift Strike behind him, after using Swift Strike. It's a delayed amount of damage that allows you to effectively slice through a group of players twice. If you don't quite kill someone on your first attack, your delayed shadow often will.

Level 20: The Dragon Becomes Me

The Dragon Becomes Me allows Genji to extend the duration of his heroic by 0.5 seconds every time he hits an enemy hero. Effectively, you can maintain it permanently as long as you're constantly hitting on someone. Whether in a team fight or 1 on 1 encounter, it's a surprisingly good talent.

Variable: Sharpened Stars is fantastic in this talent build because it allows your Shuriken's to pierce. Combined with your quest talent for improving their damage, having them recharge when you use Cyber Agility and if you've taken Double Jump at 13, it's a huge amount of ranged pressure.

These Hero Threat Levels (1 being lowest threat and 10 being highest threat) are to help you determine which enemy Heroes can give you a headache. For the Heroes listed here, take extra care as they're particularly dangerous for Genji.

This list of tips and tricks are just a handful of things we think will help your Genji play. We'll continue to add to the list as required and if you have any tips you'd like to share, let us know in the comments below and we'll place them here.

1. Genji has a very short but rapid basic attack. You can also move just a little bit while firing (but not quite Tracer levels of mobility). Be sure to constantly stutter-step to output consistent damage.

2. All Shuriken charges return at once, but it does take some time. Try not to waste your Shuriken's on minion waves or camps - it's pretty pointless when other heroes can clear quicker and you may need your Shuriken's moments after.

3. The telegraph of your Shuriken's is the same as Nazeebo's Plague Toads: three narrow lines, in a small arc. Ideally, you want to be using them at close range for maximum damage against a single target, or at maximum range to pressure a group.

4. Using Swift Strike towards an enemy player (or Cyber Agility) followed immediately by your Shuriken's is - without your heroic or Deflect - Genji's highest burst.

5. Deflect makes Genji immune to ALL damage for 1.25 seconds. Even if you aren't using it offensively, it will save your life against massive burst damage.

6. Deflect returns a Kunai for each instance of damage you suffer during Deflect. If you can time it against swift attacks or a large pool of damage, it return a significant amount of instant damage.

7. Deflect will only return Kunai back to the nearest target. Ideally you want to be immediately next to a high-value hero so that when you do suffer damage, they receive it back.

8. Swift Strike has an absolutely enormous range. It's also instant, meaning you can escape or engage from further away than any other hero.

9. Swift Strike does not make you Unstoppable. You can be stunned or rooted the moment you use it.

10. Be aware that Swift Strike not only has its cooldown reset if you kill someone within 2 seconds of using the ability against them, but it also allows you to travel through all enemy heroes. If you can, always aim for those with low health.

11. Genji can still use all his existing abilities while wielding Dragonblade. Be sure to if you need the mobility from Swift Strike, or some ranged poke from Shuriken.

13. Don't forget you can use your Cyber Agility to leap over just about all scenary.