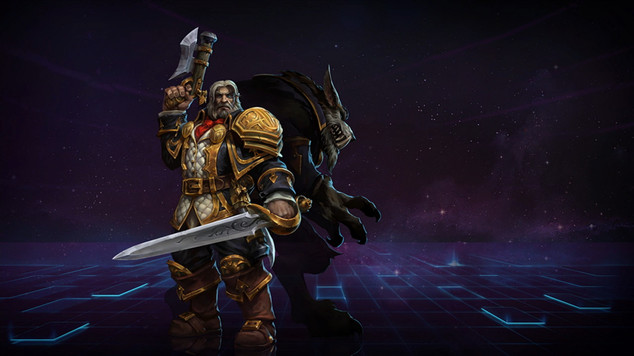 Greymane is a unique and flexible Hero that can shape-shift from a human form, to a Worgen. His human form allows him to attack from range with his pistol and Gilnean Cocktail whilst the Worgen is melee based, thanks to a mean set of claws.

Key to success with Greymane is your ability to manage both of these forms effectively, knowing when to shape-shift back and forth in order to survive but to also deal maximum damage. Unsurprisingly and due to the flexibility of Greymane, he's a particularly powerful Hero.

His ability to dive into combat, retreat and continue to deal damage makes him particularly deadly. Unlike other assassins, he also has a reasonably high health pool (1,800) and base armor in Worgen form (+10) meaning he can survive a reasonable amount of damage over a period of time.

If you're to maximise your effectivness with him, you should regularly be jumping in and out of your forms to use all your abilities. Most important of all however is to position yourself well and to not carelessly dive: once Greymane is committed, he can't escape for some time.

Curse of the Worgen (Trait) - As you might expect, Greymane's Trait allows him to shapeshift from a human into a Worgen. Your ability to shift is linked directly to your abilities and whilst the trait provides no bonus in human form, when you shift to a Worgen you deal 40% extra damage and gain 10 armor (or 10% mitigation). Considering many of Greymane's Worgen skills involves leaps, it's relatively easy to make use of the damage bonus and against Mercenary camps or static objectives such as an Immortal, it allows Greymane to deal huge damage rapidly.

Gilnean Cocktail  (Q) - Without doubt a unique skill and the first of its kind, Gilnean Cocktail is an AOE projectile that once thrown will explode on the first target hit. The impact target will take a small amount of damage but those behind that individual will take high splash damage in a cone. During a team fight when you want to pressure a group, it's amazing at dealing damage to multiple targets. Just be sure to hit a target or the Cocktail won't explode. As a final note, try to always position yourself so that it hits multiple targets - used on a single target is wasteful as it costs a fair amount of mana and deals little damage against the source.

Inner Beast (W) - Functioning similarly to Raynor's Inspire, Inner Beast can be used in Human and Worgen form. Granting a 50% increase to your attack speed for 3 seconds, as long as you keep attacking its duration is refreshed (basic attacks extend its duration by 1 second). When laning or during a team fight, it provides a huge damage boost to you and your Worgen form. Just be sure to constantly keep track of your attacks to ensure you don't let Inner Beast fade.

Dark Flight (E) - In Human form Dark Flight allows you to transform into a Worgen and leap at a foe, dealing damage on impact (picture it as a smaller version of The Butcher's Onslaught). It's a relatively simple ability to use and can be used as an escape (if you target a minion or wall) but is primarily used to dive into combat or chase someone down.

Razor Swipe (Q) - As a basic melee attack, Razor Swipe when in Worgen form allows you to dash forwards and deal damage in a frontal arc. Its damage isn't enormous but it has a very short cooldown (3 seconds) and can also be used alongside Inner Beast to attack much faster.

Disengage (E) - As his final ability, Disengage allows you to roll backwards as a Worgen and return back to being human. It's your only real means of escape and can eventually be upgraded to allow you to stealth. Be sure to use Disengage if you get low health or to retreat a little to fire off a Gilnean Cocktail before jumping back into a fight. It's important to know however that you cannot instantly Disengage after using Dark Flight - there's a 5 second cooldown so be sure you can survive before committing to a dive.

Go for the Throat (Heroic) - As his first Heroic, Go for the Throat allows Greymane to leap at a target enemy and transform into a Worgen instantly. He'll slash on landing, dealing high single target damage. If you successfully kill your target, you can use the ability again - for free - within a 10 second window. It's absolutely brilliant during a team fight if you happen to arrive late as you can effectively dive from Hero to Hero as you pick them off. Predictably, using Go for the Throat too early can leave you very vulnerable as you aren't immune to Crowd Control during the dive. It's also important to note that targets who will die instantly to your Heroic are marked above their heads with a red cross.

Cursed Bullet (Heroic) - Cursed Bullet allows Greymane to shapeshift into a Human and fire a bullet straight ahead. The first enemy hit suffers 25% of their current health as damage. It's an enormous amount and can seriously hurt high any Hero caught in its path. The fact it's another ranged option for Greymane also helps as it not only transforms him out of being a Worgen instantly, but also ensures he can pick off a target he might not have originally been able to reach. It's a good idea to use the Cursed Bullet early and then switch to Worgen for massive burst. 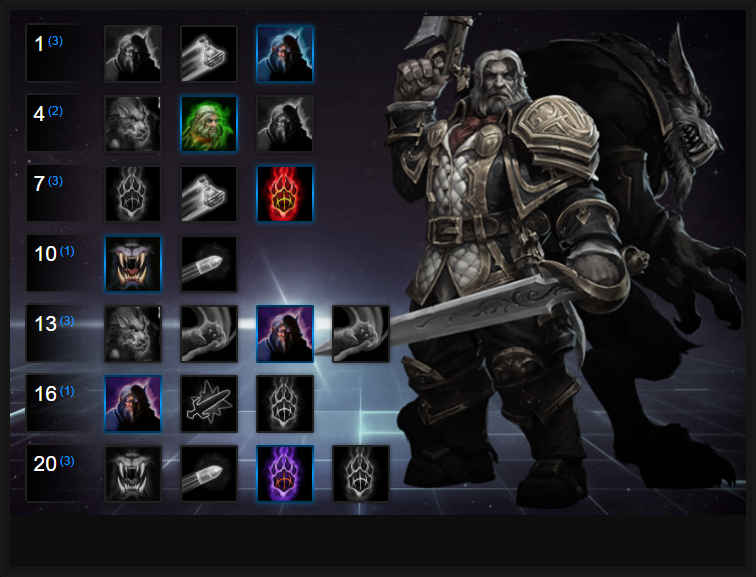 Viciousness increases the duration of Greymane's Inner Beast to 4 seconds, and allows his ability damage to refresh its duration. With effective use of Razor Swipe, this allows Greymane to maintain it near permanently when attacking objectives or clearing camps.

Level 4: Eyes in the Dark

Eyes in the Dark provides Greymane with an invaluable stealth that activates once he rolls backwards from Worgen form. It's almost a gaurenteed escape but more importantly, even if you aren't low health it allows you to reposition yourself during the fight. 3 seconds of stealth is a long time.

Wizened Duelist allows Greymane to significantly increase his damage by attacking in human, or Worgen form. Every 6 basic attacks grants a 1% increase in your damage, up to 30%, with Worgen form contriburing +3 stacks per swing (as opposed to 1). It's easy to maximize, but half your stacks are lost on death.

Level 10: Go For The Throat

Purely because we're heading back towards a burst meta, with less reliance on early sustain, Go For The Throat is back in order for Greymane. Allowing him to deal massive immediate damage, which then resets the Heroic if he successfully kills someone, allows him to snowball easily in a fight.

When Inner Beast has been active for 3 seconds, Greymane receives a 30% increased movement speed. Not only does On The Prowl allow him to kite easier in human form, but also ensures few can escape him when in Worgen.

With careful management of your Inner Beast, you can comfortably maintain it for 4 seconds. Once you do, Eager Wolf grants a 40% increase to your attack speed for 4 seconds. Incredible against a static objective (such as an Immortal) but also great towards the mid/end of a team fight.

Variable: Although you technically can't utilise the bonuses of this talent by yourself, it's pretty much gaurenteed someone on your team will have a slow, stun or root. If an enemy is affected by either of these things, your basic attacks will deal 30% extra damage to that. That's enormous and eye-watering for burst potential. Executioner might be niche, but it's fab.

Hunter's Blunderbuss is an excellent talent. It provides you with splash damage on your pistol, not only offering good wave clear but fantastic team fight potential. Factoring in your additional range on your basic attacks in Human form, it's good (free) AOE pressure.

These Hero Threat Levels (1 being lowest threat and 10 being highest threat) are to help you determine which enemy Heroes can give you a headache. For the Heroes listed here, take extra care as they're particularly dangerous for Greymane.

This list of tips and tricks are just a handful of things we think will help your Greymane play. We'll continue to add to the list as required and if you have any tips you'd like to share, let us know in the comments below and we'll place them here.

1. Remember that your primary form, is your Human form. Your Worgen is specifically designed for diving into combat and bursting someone down.

2. When in Worgen form, your attacks deal 40% more damage and you have 10 armor (10% mitigation). This is your highest burst and allows for easy capture of camps.

3. ONLY dive as Worgen if you know you can secure a kill or escape afterwards. There's no use diving in if you'll die in the process.

4. I can't stress enough - poke, poke, poke in Human form. Buy your time until you can leap in.

5. Remember that during early game, Gilnean Cocktail deals the vast majority of its damage behind the struck enemy, so be sure to factor this into your positioning

6. Gilnean Cocktail won't do anything if it doesn't hit a target, it will simply vanish. Be sure to hit something!

7. If you can, try to position yourself so that you hit as many people as possible with the splash of the cocktail. Later game, it deals lots of damage.

8. Inner Beast can last indefinitely as long as you're constantly attacking something. Try to use it during a team fight or against a camp.

9. It's a good idea to trigger Inner Beast just before diving as a Worgen. That way you get your quickest attack speed the moment you transform.

10. None of the abilities available to Greymane provide evasion so when in Worgen form, be sure to play him as you would a melee assassin (lots of flanking and waiting until players are medium to low health)

11. Try to always open a fight with Cursed Bullet. It's cheap on mana, low cooldown and you'll take a huge chunk of health off an enemy.

12. Try to always save your Worgen form (dive) for when an enemy is stunned, rooted or slowed to make use of your Executioner talent.