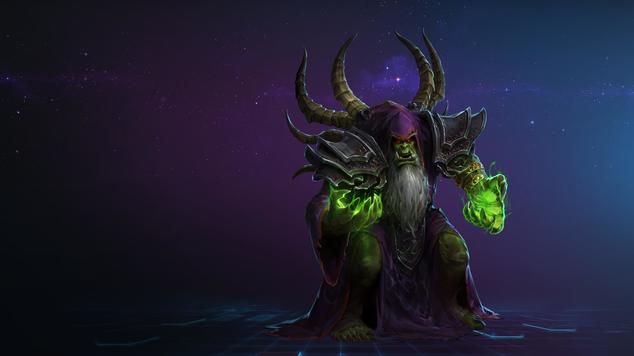 In this Gul'dan Build Guide, we provide an overview of his strengths, abilities, talents and matchups.

Gul'dan is a strong sustained damage mage that consumes his own health to deal damage. He can clear waves very quickly and deal strong sustained AoE damage to enemy heroes. While he has no mana regen, he can consume his life to gain mana, while also having multiple tools to sustain his health from his self-inflicted damage.

Gul'dan can be a strong choice in most compositions, offering consistent AoE damage and very powerful wave clear. Just beware that he has no mobility and can struggle to make distance between approaching enemies. 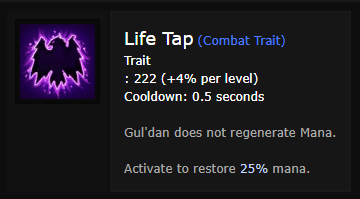 Life Tap (Trait) - A very unique trait and the core behind Gul'dan's Warlock playstyle. Gul'dan can sacrifice some of his health to gain mana, allowing him to continue dealing damage to enemies. This ability has next to no cooldown and is instead limited by your health as you can quickly place yourself into a dire situation if you Life Tap too often without sustaining yourself. Make sure to use Drain Life or other health restoring abilities often to avoid straining your healer too badly. Hovering between 75% and 100% health is ideal, but you can go lower if enemies have no way to catch you, such as when their movement abilities are on cooldown.

Fel Flame (Q) - With a cooldown of 1.5 seconds, Fel Flame is a high damage wave attack that you can use very often, limited more by your health and mana than its cooldown. It is your main tool for dealing damage or clearing waves, and should be used often. Just keep in mind that every cast effectively costs you some health as you will have to Life Tap to regain your mana. Using it multiple times to zone enemies can quickly leave you vulnerable.

Drain Life (W) - Drain Life deals damage to an enemy and returns a high amount of health back to Gul'dan over time. As a channeled spell you cannot move during it and you can be interrupted. Despite that, over 3 seconds it can return a ton of health and considering the synergy it shares with Life Tap, can ensure that you stay healthy for the next fight. It is a tricky ability in fights as it forces you to stand still and channel it, allowing enemies to walk up to you. Don't be afraid to cancel it early if enemies start approaching you. If you can disengage and cast Drain Life on a nearby minion, it will greatly improve your sustain in fights.

Corruption (E) - Corruption sends three circles in a line, dealing very high damage over time to enemies hit. This ability can be difficult to land but deals incredible damage if you can land multiple hits on an enemy hero or heroes. The circles always move away from you, making it very effective against enemies trying to retreat. Pressure them with Fel Flame until they start moving away, then fire Corruption at them, forcing them to slow their retreat or take multiple stacks of Corruption. It can also be powerful against CCed enemies as you can easily land 2 of the 3 circles on them.

Horrify (R) - A very powerful Heroic, Horrify fears all enemies in its radius for 2 seconds, forcing enemies to run away from the center of the Horrify circle. Its damage is low, but its utility and CC is enormous. Used in the middle of a team fight, it can split enemies heavily or completely disengage enemies, giving you space. Using it to split the enemy tank from their team can quickly lead to a kill or force enemies into a very unfavorable position. It is also a great tool to peel for allies or yourself. 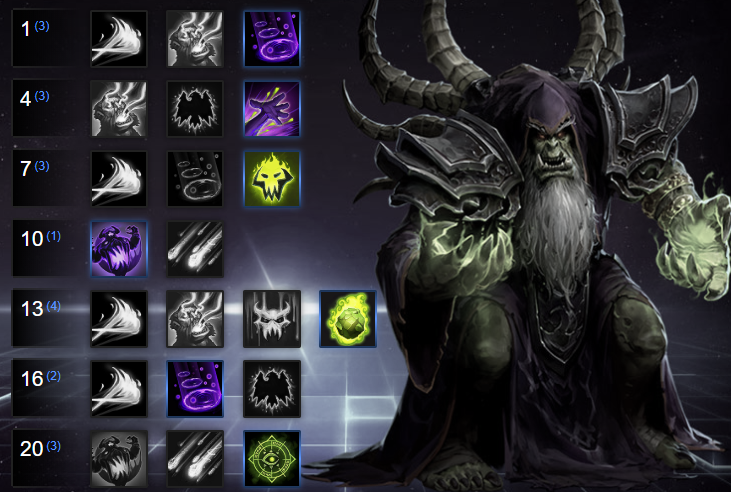 After you apply 40 stacks of Corruption to enemy heroes, your Corruption will now strike 3 times in the opposite direction after the first 3 strikes occur. This adds a ton of potential damage and zone control, forcing enemies to move out of the whole area instead of just moving towards you to avoid it.

This adds a ton of health sustain as long as you can run by some enemy minions every minute. Since most fights occur fairly close to minions, this can allow you to keep consuming your own health to deal damage without worrying about becoming too vulnerable.

Hunger for Power increases Gul'dan's spell power by 15% but reduces the healing he receives from allies by 25%. This not only increases your damage but also your own self-healing by 15%, allowing you to heal yourself more to compensate for the reduced healing from allies.

A very powerful Heroic, Horrify can bring some strong CC to a teamfight. Use it to cause chaos or split the enemy team, placing them in a very unfavorable position. It can also be used to line up Corruption as enemies are forced to run in a straight line, allowing you to easily land 3 hits of Corruption.

Having an instant heal for 25% of your maximum health is amazing and considering Healthstone is on a 60 second cooldown, it'll almost always be available for a team fight. In a fight it effectively increases your maximum health by 25%, making you even harder to kill.

Fel Armor grants Gul'dan 40 spell armor for 2.5 seconds whenever he hits an enemy hero with Fel Flame. This can make him incredibly tanky against teams with multiple mages or other strong forms of spell damage.

Ruinous Affliction makes Corruption deal initial damage when it hits enemies. For every third hit against the same hero per cast, the initial damage is tripled on the third hit, giving Gul'dan some significant burst. Even if you don't land 3 hits, the extra damage is significant, and will greatly increase your pressure.

Demonic Circle allows Gul'dan to place a circle on the ground that he can instantly teleport to. This can make Gul'dan very difficult to kill. Try to place the Demonic Circle far enough away to guarantee your safely when you teleport but not too far that you cannot rejoin the fight.

Variation - Haunt (for when you don't need mobility)

Haunt is an amazing talent that not only increases the duration of his Horrify fear by 1 second, but also causes all enemies to take 20% more damage for the duration.

These Hero Threat Levels (1 being lowest threat and 10 being highest threat) are to help you determine which enemy Heroes can give you a headache. For the Heroes listed here, take extra care as they're particularly dangerous for Gul'dan.

This list of tips and tricks are just a handful of things we think will help your Gul'dan play. We'll continue to add to the list as required and if you have any tips you'd like to share, let us know in the comments below and we'll place them here.

1. Life Tap consumes your health to give you mana. The more damage you look to deal, the more often you will need to look for healing.

2. Don't Life Tap in a team fight if you're already low health. Look for some healing first to stay safe.

3. If you can, try to always save your Healing Fountain for a team fight rather than when in lane. Using Drain Life often should be all you need to sustain yourself.

4.  Fel Flame has a very low cooldown. Use it repeatedly in a team fight, and use it to clear waves quickly.

5. Fel Flame doesn't have a huge range so don't over-extend just to use it. Position yourself so that you're at maximum range when using it.

6. Drain Life can be used on minions, mercenaries and summons to heal Gul'dan for a significant amount.

7. When you cast Drain Life, it actually stretches farther than the initial range once it's attached to a player. Even if they move out the original radius, it'll remain connected until they move far away

8. Corruption can take some practice to aim properly as it has 3 strikes which move away from Gul'dan. Try to force enemies to retreat before throwing it or cast it on CCed enemies.

9. When you have Horrify, save your Corruption so that when the enemy runs in a straight line, you can cast it at them to guarantee all 3 strikes.

10. Horrify is incredible when a team-fight. Use it to scatter them and look for kills, or peel.

11. Remember that Gul'dan has more sustain than most heroes. You can trade health with enemy heroes and heal yourself much faster than they can.