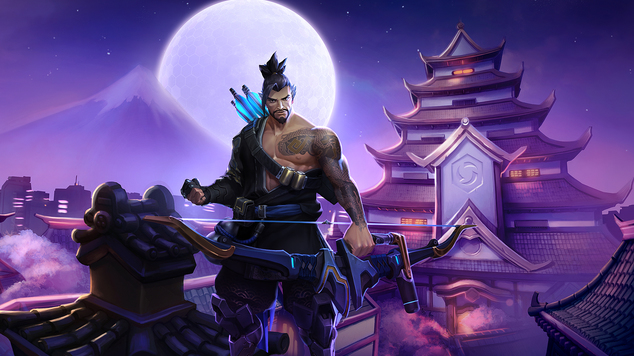 In this Hanzo Build Guide, we provide an overview of his strengths, abilities, talents and matchups.

Hanzo is a ranged Assassin with a variety of tools to allow him to impact the game. His high damage, mix between physical and spell damage, vision through Sonic Arrow, and mobility make Hanzo is a solid choice if you don't mind learning some simple geometry.

While Scatter Arrow is very difficult to master, it can deal incredible damage if you are able to consistently land most of the arrows on a single target. This damage relies on your positioning, the enemies positioning and your knowledge of the map. If looking to master Hanzo, Scatter Arrow is the ability you should spend most of your time figuring out.

Natural Agility (Trait) - Natural Agility allows Hanzo to jump over nearby terrain. This can allow him to get out of tricky situations or reposition quickly. Considering its lengthy cooldown, it’s important not to waste Natural Agility. Use it when under pressure, or to secure a kill against an enemy who’s attempting to escape if enemies cannot punish you for it. Keep in mind that you do not have to always jump over a large wall, and can instead look to jump over a corner or other small bump in terrain.

Storm Bow (Q) - Storm Bow provides Hanzo with a long ranged attack that he can charge while he moves. While it only hits the first target it comes into contact with, its range combined with low cooldown, allows him to pressure enemies consistently. Ideally you want to fire this as often as possible to keep your DPS rolling. This can add a ton of extra DPS to a fight and can force the enemy tanks to make a play or retreat from your damage.

Scatter Arrow (W) - Scatter Arrow is a very difficult ability to master, requiring you to know some simple geometry, as well as the wall layouts of every map, and where to position based on where your enemy positions. Scatter Arrow fires one arrow that splits into 5 arrows when it collides with terrain, each dealing their own damage and traveling farther. Take time to look at the walls near you and position where you have options to hit enemies. The closer enemies are to the walls, the easier it becomes to land most if not all Scatter Arrows on them, dealing tremendous damage. This one of the few abilities that I recommend turning quick cast off and using On Release instead as it will help a ton with aiming Scatter Arrow.

Sonic Arrow (E) - Allowing Hanzo to grant himself and his team vision of a fixed area, Sonic Arrow acts somewhat similarly to Rexxar’s Flare, or Lunara’s Wisp. Sonic Arrow cannot be destroyed, its radius is fairly large and while it’s capable of dealing damage on impact, it is often much better to have vision of an area rather than follow one hero around for 5 seconds. This can be used to scout bushes, or just keep tabs on enemies in a fight.

Dragonstrike (R) - Dragonstrike is a potent zoning tool that can keep enemies away from an area for a long time. The long cast time, paired with its incredibly slow speed, make it very easy to avoid, making it very difficult to look for kills with it. If your team has a ton of CC and can lock down enemies this can deal some very strong damage but it is most often going to be used to deny space from enemies.

Dragon's Arrow (R) - Dragon’s Arrow offers some strong crowd control and AOE damage. Travelling indefinitely until it hits an enemy Hero, the impact stun and damage is fairly high. Either look to follow up CC or initiate a fight as it is very difficult to dodge if you have no allied vision to rely on. Keep in mind that the damage and stun duration is based on the distance Dragon's Arrow has traveled but often the best Dragon's Arrows are medium range as that is where you will likely be positioned in a fight. 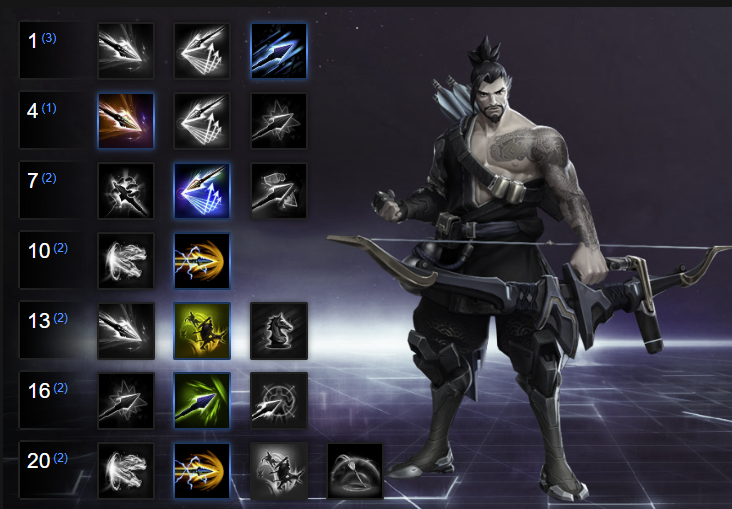 Every 2 basic attacks against the same Hero within about 10 seconds grants 1 stack, up to 12 stacks. At 12 stacks, Hanzo gains 50% attack speed, allowing him to attack once per second cleanly. If Hanzo dies he loses 3 stacks and can even lose stacks when at 12 stacks. This adds a ton of extra auto attack DPS (if my math is correct, 50% more DPS). It also allows his auto attack timer to line up nicely with Never Outmatched at level 7.

Simple Geometry is a powerful option for pressuring enemies in the backline, from your backline. It can be difficult to see value as the extra 2 arrows have an even greater angle when it splits, making it even more difficult to land them all, but will add some very strong extra damage if landed.

As Hanzo has low wave clear baseline, Explosive Arrows allows him to clear minion waves easily. This will free you up from hitting minions and give you time to do whatever you want, whether it is clearing a different minion wave, taking mercenary camps, trash talking your team, or visiting your parents you have not seen in ages. Explosive Arrows can also allow you do deal significant damage to enemies hiding behind their minions.

Alternative - Sharpened Arrowheads (for if you are not that into geometry)

Allowing Hanzo to lower the armor of any target he hits with a basic attack, Sharpened Arrowheads allows him to pressure a single target quickly and easily. While the armor debuff isn't huge, it reaches up to 20% allowing him and his team to deal much more damage. This can pressure enemy tanks that just really don't want to back up.

Providing burst damage and an AoE stun, Dragon's Arrow is a very solid heroic. This adds a great tool for following up CC or initiating fights as the travel speed of the Dragon's Arrow is fast, making it difficult to dodge if enemies have no extra vision to see it coming. It can also be used point blank if an enemy is on top of you for a quick stun to escape.

Hitting Heroes with Storm Bow lowers Natural Agility's cooldown by 10 seconds, while a takedown resets it instantly. This can greatly improve Hanzo's mobility, allowing him to stay away from threats or reposition more often. It also allows Hanzo to play very aggressively if he can garuntee a kill as takedowns refresh the cooldown of Natural Agility, allowing him to jump in, secure a kill, and jump out.

Piercing Arrows allows Storm Bow and Scatter Arrow to pierce 1 additional enemy. This fairly simple effect has a huge impact on Hanzo's damage output. This allows not only the initial Scatter Arrow to pierce, allowing you to aim at any wall, even if there is one enemy in front of it, but also makes every split Scatter Arrow also pierce enemies, adding massive AoE damage. Not only this, but the split Scatter Arrows can pierce 1 enemy each time it ricochets, allowing it to piece enemies multiple times if it bounces through them. This can also allow your Storm Bow to annihilate minion waves, as it will proc his Explosive Arrows talent at level 4 twice.

Play of the Game allows for Hanzo to teleport to his Dragon's Arrow and do a sweet flip backwards at any point in its travel or for a few seconds after it hits an enemy hero. If used after it hits an enemy hero, Hanzo will also deal damage to all enemy heroes hit. This can add a little extra burst as well as reposition yourself. It also allows Hanzo to stand very far back to look for a long range stun while still being able to enter the fight after.

These Hero Threat Levels (1 being lowest threat and 10 being highest threat) are to help you determine which enemy Heroes can give you a headache. For the Heroes listed here, take extra care as they're particularly dangerous for Hanzo.

This list of tips and tricks are just a handful of things we think will help your Hanzo play. We'll continue to add to the list as required and if you have any tips you'd like to share, let us know in the comments below and we'll place them here.

1. Save Natural Agility for when under serious pressure. Ideally, you also want to position yourself near terrain that you can instantly leap over when you're under attack. Just keep in mind enemies that can follow you over the wall.

2. Holding Storm Bow doesn't increase its damage, only its range.

3. Try not to hold Storm Bow for too long as you cannot auto attack while charging it.

4. Scatter Arrow displays the ricochet angle of the arrows fired.

5. Scatter Arrow can be very difficult to land and requires not only practice but also knowledge of the map walls.

6. Sonic Arrow is a very powerful tool for scouting an area but it does have a high mana cost. If you know where all of the enemies are, save it for when you do not.

7. Landing Sonic Arrow on an enemy Hero can be worse than landing it on the ground where you want it as enemies can drag it to a useless position and deny your vision of the rest of their team.