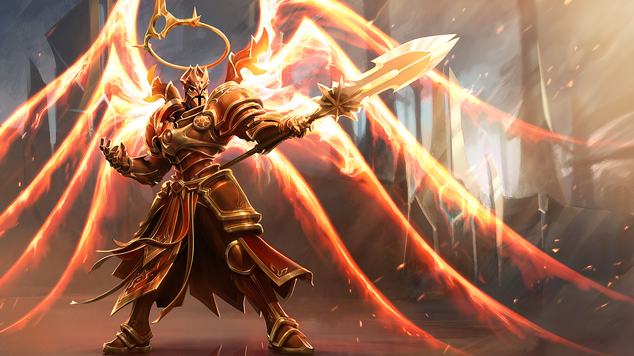 In this Imperius Build Guide, we provide an overview of his strengths, abilities, talents and matchups.

Imperius is a powerful Warrior that pressures the enemy team mainly through damage rather than CC. With his high damage and self sustain, he's undoubtedly strong. His stun can be interrupted but has a fairly long range, able to pin multiple enemy heroes if they line up. In addition to that, the damage his Trait adds is considerable. Imperius is a strong second frontline that can cause a ton of chaos for the enemy team.

Valorous Brand (Trait) - Valorous Brand allows Imperius to deal increased damage per stack of his trait on an enemy hero. Each ability grants 1 charge, and is consumed by basic attacks. This adds some extra damage to your auto attacks assuming you are landing your abilities on enemies. If you hit multiple enemies with abilities, auto attacking them all once to consume the stacks can add some significant damage to each target. However, don't get too caught up in consuming your stacks if your team is looking for a kill on a specific hero.

Celestial Charge (Q) - Celestial Charge allows Imperius to lunge forwards, dealing damage to enemies in his path. At the end of the short lunge, Imperius stabs forwards, impaling all enemy heroes in the stab range and channeling to stun them for 1 seconds, dealing additional damage at the end of the channel. Enemies too close to you cannot be impaled due to the lunge so position accordingly. The impale channel can be interrupted if Imperius is stunned, silenced or knocked back, so keep those in mind when you look for a stun.

Solarion's Fire (W) - Solarion's Fire sends a wave forwards, dealing damage. If enemies are hit by the center they take additional damage and are slowed. This can be a great tool to set up a Celestial Charge as it is much easier to impale them when they are slowed.

Molten Armor (E) - Providing high amounts of sustain, Molten Armor damages nearby enemies and heals Imperius. The healing is increased if Molten Armor strikes heroes. Keep in mind that the ability does not hit every target near you every 0.25 seconds but rather randomly chooses one every time it strikes so you will always deal the same total damage whether you are near 1 enemy or 10 enemies. This can be a great tool for applying Valorous Brands to enemies as it ticks very fast, applying a Brand each time.

Angelic Armaments (R) - A very strong Heroic, Angelic Armaments provides a massive shield, and potential damage. Should his shield not break, you can retrigger the ability to fire your swords into a point, with each sword dealing significant damage. At level 20, the shield is almost 2300 health, and each sword deals over 350 damage. The damage is significant but unless you have some CC to follow up they can be unreliable. Wade into the enemy team, drawing fire, before popping your huge shield and giving your team tons of time to deal damage without repercussion.

Wrath of the Angiris (R) - While it offers Imperius some mobility, and the opportunity to displace an enemy Hero, it doesn't offer the survivability of Angelic Armaments. That said, if you can repeatedly - and reliably - snag a high value target, it acts similarly to Stitches' Hook or Cassia's Valkyrie in punishing anyone out of position. 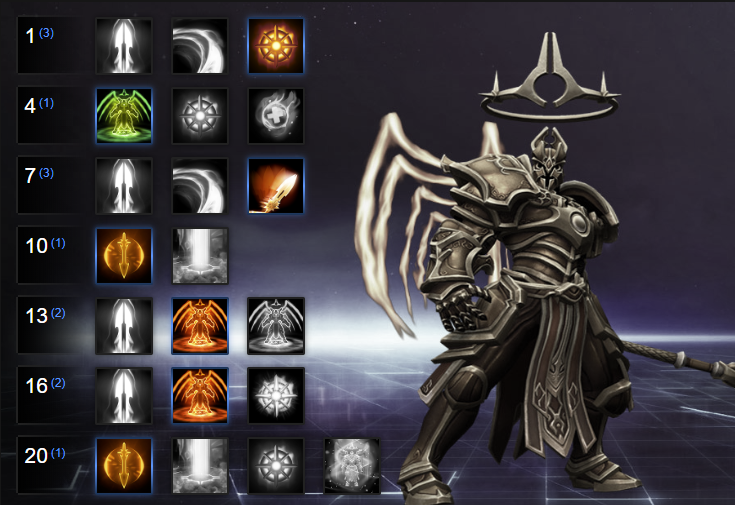 Burn the Impure allows Imperius to deal an additional 2.5% of the enemy's maximum health per Valorous Brand consumed. This can add some significant sustained damage in fights as well as make you a huge threat to tanks. This also allows you to trade much more effectively against most heroes in a side lane.

Consuming Flame allows Imperius to increase the central damage by 125% but also increases its slow by 15% (bringing it to 55%). This can add some extra burst in faster fights and is great for controlling players who're clumped together.

Sovereign Armor grants Imperius 50 armor for 1.5 seconds. Every time Molten Flame hits an enemy hero it increases the duration of this armor by 0.5 seconds. If you land the entirety of Molten Flame on enemy heroes you can have a total of 7.5 seconds of 50 armor, making you incredibly hard to kill. Can also be used to negate burst.

Holy Fervor allows Imperius's next 4 auto attacks to cleave for 30% increased damage. This damage procs Valorous Brand and stacks with it, allowing Imperious to deal very high AoE damage and healing himself by consuming multiple Brands.

Angelic Armaments is incredibly strong, providing massive shielding and potential damage. This can allow you to stay deep in the fight, keeping yourself alive through a huge shield. The longer you are in the fight, the more damage you can dish out through auto attacks and consuming Valorous Brands.

Shortening the cooldown of Molten Armor by 0.25 seconds every time you hit a Hero, Divine Rage provides massive up-time to his defensive ability if you're in amongst the enemy team, hitting multiple opponents. This pairs incredibly well with Sovereign Armor talent at level 4.

Melting Touch allows Imperius to reduce an enemy hero's armor by 25 whenever he consumes a Molten Flame Valorous Brand. This can greatly increase the damage your team can output on the kill target or just pressure enemies.

As if his Heroic wasn't good enough, Heavenly Host allows Imperius to shield his nearby allies the moment he casts it (for 3 seconds), providing amazing amounts of group survivability. This can save your whole team and is very hard for enemies to play around.

These Hero Threat Levels (1 being lowest threat and 10 being highest threat) are to help you determine which enemy Heroes can give you a headache. If a Hero is listed here, take greater care.

This list of tips and tricks are just a handful of things we think will help your Imperius play. We'll continue to add to the list as required and if you have any tips you'd like to share, let us know in the comments below and we'll place them here.

1. Imperius can deal incredible damage if he is constantly consuming Valorous Brands.

2. Valorous Brand not only deals damage but also heals Imperius, allowing you to stay in the fight longer the more you consume.

3. Celestial charge's impale is a channel, meaning you cannot take many actions while it is active. Careful to use it where enemies cannot burst you

4. Molten Flame can be cast during Celestial Charge's channel.

5. Molten Flame randomly targets enemies near you and does not prioritize heroes. Avoid fighting in minion waves to maximize your damage and healing.

6. Celestial Charge does not impale enemies that are too close you when you lunge as you will lunge over them before stabbing.

7. Angelic Armament's swords spawn near you like Li-Ming's Magic Missiles do, with one spawning on you and the others spawning beside you and converging on the location you chose to send them.