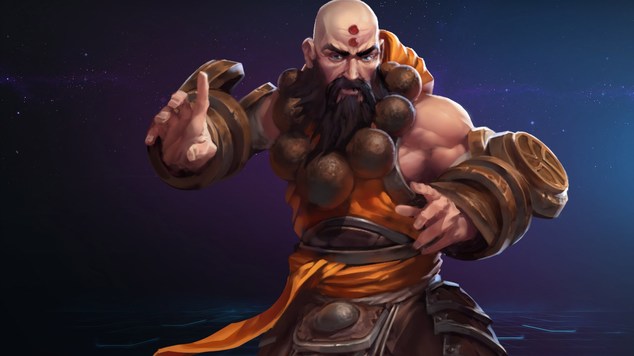 Kharazim is a flexible and powerful Support Hero that's capable of dealing good damage as well as providing invaluable healing to his party. He plays somewhere between Brightwing, Rehgar and Tyrande in his utility, but his melee is rather unique. What makes him so much fun is the fact that he can specialize in just healing, damage or a bit of both and do both well.

I tend to always pursue a healing build simply because it typically brings the most value to a team in ranked matches. However, his talents do allow for a great deal of flexibility and building him as a hybrid, thanks to his relatively powerful array of talents.

I will stress that Kharazim can be a challenging Hero to play well. His need to be on the front line to deal damage, combined with a complete lack of range can often leave him vulnerable. Fortunately he has a great deal of mobility that allows him to get in and out of combat quickly.

Iron Fists (Trait) is one of three variants on Kharazim's Trait and at the start of the match, you can choose to have it cause one of three effects every 3rd basic attack. The choices are mana gain, health, or additional damage. Depending on your preferred playstyle will depend on whether you choose specific talents. Trascendence is undeniably useful when solo laning, taking camps or provoding some additional support in a fight. However, its healing amount isn't huge and you have to be on the front line dealing basic attacks for it to proc. This isn't always possible outside of Deadly Reach (see below). Often this can mean Iron Fists is a much better alternative simply for its additional burst while Insight provides amazing amounts of mana restoration and lowers your cooldowns.

Radiant Dash (Q) - allows Kharazim to jump to an ally or enemy. It's invaluable for escaping or engaging early and can later be talented to have more charges or cause an effect on arrival. The fact it also allows you to hit with an immediate basic attack means you can often kill someone who is trying to escape, before zipping back with another Radiant Dash. Try not to waste your charges however, as you may need them to escape.

Breath of Heaven (W) - is your main healing abilities and heals all allies around Kharazim. At level 20 it heals for a fair amount (around 600), but its real strength is the fact you can use it fairly often. Just be sure to try to use it when as many of your team are around you, as they'll all then benefit from it. Best of all, it also provides a 15% movement speed bonus for 3 seconds: great for escaping or chasing a weakened set of foes.

Deadly Reach (E) - is Kharazim's burst ability and allows you to deal rapid fire melee attacks for 2 seconds. The attack range increase allows you to still lands attacks even if someone attempts to move away from you, but it does mean if you're being body blocked you can still reach an opponent. What's particularly powerful about Deadly Reach is the fact the rapid succession of attacks triggers your Trait. If you chose Transcendence it's a very fast output of AOE healing for your team. The damage isn't too bad either, especially if you chose Iron Fist.

Seven-Sided Strike (R) - allows Kharazim to strike a target 7 times in rapid succession. What makes it an strong Heoric is the fact your damage is based on a Heroes maximum health, not their current health pool. It's more than possible to burn down the likes of Arthas to half health as a very minimum, just from this skill alone. It should be noted that enemies can exit the radius of Seven-Sided Strike and if they do, they'll avoid the damage entirely. It is however useful for zoning and locking down a single target. I will also add that high-level players counter Seven-Sided Strike by all diving into its radius - this ensures the damage is shared amongst everyone, rather than a single player thus mitigating most of its impact. Despite that, it's still excellent if used correctly.

Divine Palm (R) - is similar to Rehgar's Ancestral Healing in the sense it's your "Oh, shit!" button for rescuing someone about to die. It will only heal an ally if they take fatal damage, so you have to time it just right to gain any use out of it. Be aware that when you mark a target, they'll receive an icon above their head that the enemy can see. In some instances, a good enemy team will then stop focusing that target to prevent you saving your team mate. It's best to use it when you can be sure the ally will die and if they don't, they should be diving back into combat to ensure that they do so Divine Palm triggers. 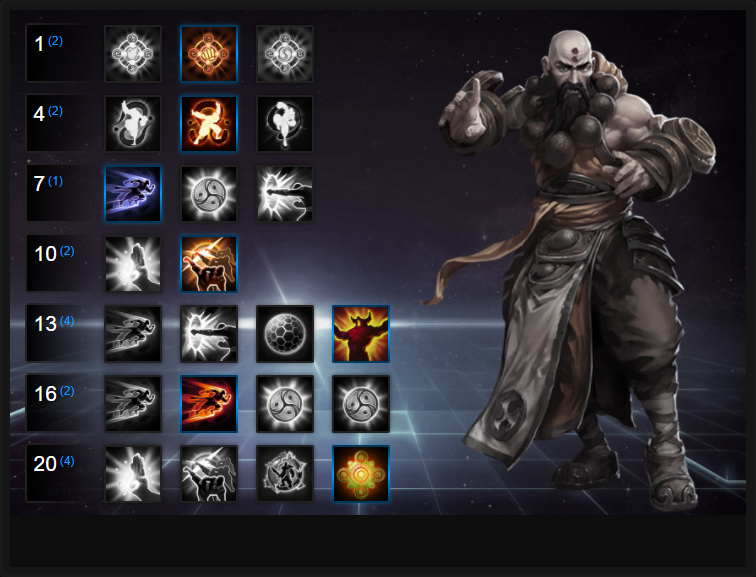 Effectively allowing Kharazim to critically hit a target every 3 basic attacks, Iron Fists offers a huge amount of spike potential for Kharazim. Alongside the damage bonus of 110% he also received a 30% movement speed increase for 2 seconds, allowing him to gain greater mobility while sticking to targets much easier.

Variable: Providing Kharazim with amazing amounts of sustain, Insight is my go-to choice right now for him. Not only does it provide incredible amounts of mana sustain, but once you complete the quest the cooldown reduction - in many ways - overshadows Trascendence. Considering your Deadly Reach and Way of the Hundred Fists (level 16 talent) all trigger the cooldown reduction, you can constantly use your heal, Breath of Heaven.

Kharazim summons an Earth Ally that reduces all basic attack damage received by 50%. Although the Earth Ally can be killed, it has around 900 health at level 20 meaning it'll withstand some punishment. Considering you can also Radiant Dash to your Earth Ally, if you place it at the back of the team fight it's a reliable escape and your team will gain huge benefits from it. Great against basic attack compositions.

Blinding Speed is a good talent for Kharazim as it increases your number of Radiant Dash charges to 3. It also reduces the cooldown of the ability by 2 seconds.

Variable: Blazing Fists is great for truly maximizing your damage output and ensuring multipliers on your basic attacks as every 3rd attack lowers the cooldown of Deadly Reach by 0.75 seconds. It doesn't sound a lot, but it can quickly shave time off your ability so that you can use it much more often.

Providing immunity and a considerable amount of damage, Seven-Sided Strike provides excellent zoning and aoe pressure. Against large groups of enemies it damage falls off considerably but in small team fights (2's and 3's) it's absolutely fantastic.

Variable: Divine Palm is still excellent and should be picked against high burst compositions. It hard counter's Kael'thas' and his Pyroblast and although skilled players will stop attacking anyone under its spell, it can often still turn a team fight.

Variable: As the only talent at Level 13 I'd recommend, Quicksilver allows Kharazim to gain 30% movement speed to himself and allies he dash's to for 3 seconds. Amazing for quickly reaching allies or running away once they're tagged with the movement speed buff.

Level 16: Way of the Hundred Fists

Building on your Insight talent choice at level 1, Way of the Hundred Fists allows you to rapidly deliver basic attacks to a player every time you dash towards them. You deliver 6 basic attacks on arrival, allowing your trait to trigger rapidly while also significantly reducing the cooldown on your heal. It's absolutely amazing for damage and support.

Variable: Echo of Heaven is a great alternative as it allows your Breath of Heaven to heal twice. The second is delayed by 3 seconds and it heals for only 75% of the original value, but still allows Kharazim to heal for a significant amount.

Restoring almost 33% of your mana, Epiphany also returns 2 of your Radiant Dash. It's great for allowing to stay in fights longer, but also pressure enemies more thanks to now having x4 Radiant Dash.

Variable: Storm Shield is a great alternative to provide a group wide shield (alongside Protective Shield) whilst Peaceful Repose is also viable if you find you're miss-timing or the enemy is avoiding Divine Palm Heroes.

These Hero Threat Levels (1 being lowest threat and 10 being highest threat) are to help you determine which enemy Heroes can give you a headache. Any Heroes that aren't on this list are easy pickings for Kharazim. If a Hero is listed here, take greater care. Please also note that in most instances, Kharazim can comfortably solo most enemy Heroes, with the exception of The Butcher due to his self healing and the power of it.

This list of tips and tricks are just a handful of things we think will help your Kharazim play. We'll continue to add to the list as required and if you have any tips you'd like to share, let us know in the comments below and we'll place them here.

1. Remember that regardless of the level 1 talent you choose, its effect will only activate every 3rd basic attack.

2. Kharazim is weak if he’s unable to trigger his trait, this often means he needs a dive composition or strong front-line so he can also be at the front, punching away. Try to encourage your team to draft with you in mind.

4. Regardless of the level 1 talent you choose, remember that you’re still a Support Hero.

5. Radiant Dash is your escape and engage. Don’t waste it diving in, if you know you’ll not have a charge to get you out.

6. Radiant Dash when used against an enemy will instantly land one basic attack. This can often be enough to finish off a low-health Hero.

7. By default Radiant Dash has only 2 charges. Try to always save both for a team fight.

8. Breath of Heaven heals for a high amount in an AOE around Kharazim. Try to get in amongst as many of your team as possible so they’re all healed, and all gain the speed boost.

9. If necessary, and if out of Radiant Dash charges, use Breath of Heaven to speed yourself up in order to quickly reach an opponent or safe location.

10. Deadly Reach allows Kharazim to increase his attack range and speed by 100% for a short duration. It’s a key ability for rapidly trigging your trait (whether heal, cooldown reduction or damage). Always have it ready in a team fight.

11. You can pre-arm Deadly Reach so that you don’t have to activate it during a fight. Just use the ability and dive into a fight when you’re ready.

12. If pursuing Insight, Deadly Reach can rapidly shave cooldown time from your abilities.

13. Divine Palm is still worth taking if you’re against a high burst composition, or against key Heroes such as Kael’thas if he chooses to take Pyroblast. Divine Palm can instantly negate such Heroics.

14. Remember that Seven Sided Strike splits all its damage based on the number of enemy Heroes in its radius. For more damage against an opponent, try to catch them on their own.

15. Seven Sided Strike removes Kharazim from play and makes him totally immune until its duration ends. Use it to avoid key abilities such as The Butcher’s Lamb to the Slaughter.

16. Seven Sided Strike is amazing for zoning out the enemy or killing a player 1 on 1. It's sometimes worth using this way just to secure the kill or to allow your team to escape; you can then dash away.

17. When placing your Spirits, try to place them at the back of a team fight so they won't immediately be killed.