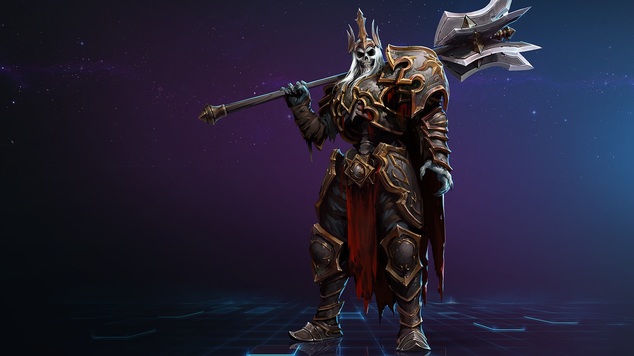 In this Leoric Build Guide, we provide an overview of his strengths, abilities, talents and matchups.

Leoric has little crowd control outside of his single slow, meaning that he needs to pressure enemies through other means such as his damage to be effective. He's capable of dealing high damage to enemy Heroes if left in the thick of things due to his cleaving auto attacks and Drain Hope. Wraith Walk gives him some mobility to escape or chase enemies.

Leoric's trait, Undying allows him to continue to annoy enemies after he has died and return to the battle much faster. This can allow you to affect fights after you have died.

Undying (Q) - Undying allows Leoric to turn into a Wraith when he dies. As a Wraith, he can use two abilities (Ghastly Swing and Drain Essence) and can freely move around the battleground. Using Drain Essence allows him to revive quicker, while Ghastly Swing will slow opponents. The primary purpose of Undying and its true value is Leoric's ability to reposition on death, slow the opposition and when his death timer is up, he respawns at his ghost's location. You should still strive to keep yourself alive as you deal no damage while dead and offer very little CC.

Ghastly Swing (Q) - Ghastly Swing can only be used when Undying and allows Leoric to slow enemy Heroes by 40%. It's primary purpose is to be a nuisance while dead, but to also allow you to land Drain Essence easier. Try to use Ghastly Swing on squishy targets or on the enemy team when they're trying to escape.

Drain Essence (E) - Acting similarly to Drain Hope, Drain Essence allows Leoric to gain health whilst Undying. It's imperative that you land this ability every time so that your death timer is significantly reduced. Be sure to slow enemies first, be as near to them as possible, and then use it. Similarly to Drain Hope, you will have to stay in range of whomever you have chained to, to maximise its use.

Skeletal Swing (Q) - Skeletal Swing is Leoric's only form of crowd control and it slows for a significant amount (40%). What's particularly strong about this ability is the fact the cooldown and mana cost is reduced by 50% when you hit a Hero. It's still great for clearing a minion wave, but considering your basic attacks now cleave, it's not absolutely necessary. If you can, try to save it for team-fights so that you can slow the opposing team.

Drain Hope (W) - Drain Hope throws out a chain that tethers to the first enemy hero hit. As long as Leoric remain close enough to the tethered target, Leoric will deal up to 20% of their maximum health while also healing him for up to 20% of his maximum health. This can deal some significant damage as well as offer some strong sustain in a solo lane or teamfight. The radius on the chain is fairly large so if someone does want to break it, they have to run quite some distance.

Wraith Walk (E) - Wraith Walk will cause you to control a wraith while leaving Leoric's body behind. When reactivated or when it expires, Leoric will teleport to the wraith. This can be a great tool to get on top of enemies or escape. Another useful note about Wraith Walk is that it makes Leoric Unstoppable, allowing him to quickly cast it and cancel it to dodge CC.

Entomb (R) - Entomb allows Leoric to create three walls in front of him, trapping enemies. This will leave only one exit to your tomb which can be easily body blocked. This can be a great tool for trapping low mobility targets, allowing your team to walk up for the kill. It can also be used to zone a large area as enemies cannot walk through the walls from either side.

March of the Black King (R) - If you're pursuing a damage orientated build revolving around self sustain, March of the Black King is incredible. Paired with CC, it can be very powerful. If you can land a Skeletal Swing and follow it up with MotBK, there's a chance you'll not only deal significant damage but provide yourself with a huge amount of health at the same time. Just be conscious of where you aim your telegraph, as once you begin to move, you cannot change direction or cancel the ability. The more enemies you hit, the more health you'll return to yourself. 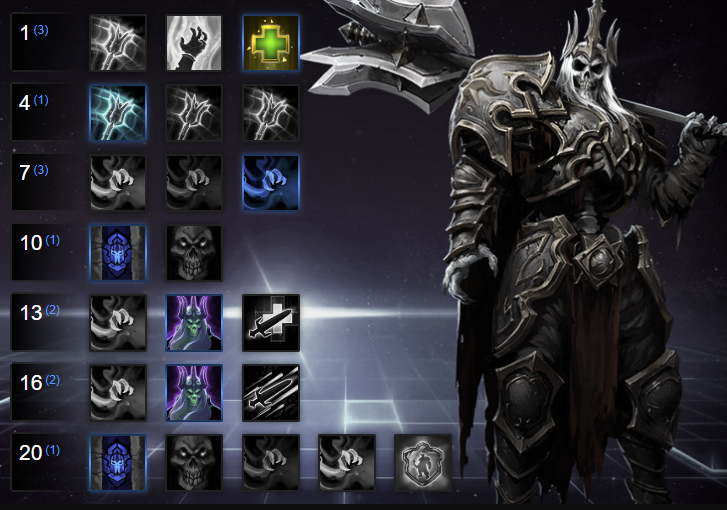 A self heal that you can use alongside Drain Hope, Ossein Renewal heals for 30% of your maximum life over 5 seconds. Although the cooldown is long (120 seconds), this can be reduced by 20 seconds per Regeneration Globe you collect. As long as you're soaking experience occasionally, it will be up for most situations.

By default, Skeletal Swing has a relatively short range. Increasing this by 25% with Ghastly Reach allows Leoric to slow his opponent's much easier. This can also allow Leoric to catch multiple enemies with the slow.

Hopelessness increases the range of Drain Hope by 25%. This will make it very difficult for enemies to cancel it without pulling themselves out of the fight briefly.

Entomb is an amazing heroic ability that allows you to trap enemies in an area for 4 seconds. Since Leoric can easily body block the only exit, it can effectively act as a 4 second root to enemies with no ability able to cross terrain. This will give your team a ton of time to follow up and secure a kill.

Ominous Wraith Increases Wraith Walk's duration and allows it to reduce the damage of enemy heroes he touches with his wraith by 50% for 4 seconds. This can significantly reduce the enemy team's damage, giving Leoric another option to pressure enemies.

Spectral Leech grants leoric's auto attacks to deal 2.5% of enemy hero's health in damage and heal him for twice the amount dealt. This can add a ton of extra damage and sustain.

Royal Focus allows Skeletal Swing to reduce the cooldown of Wraith Walk by 7 seconds per enemy hero hit and allows Wraith Walk to increase Skeletal Swing's damage. This can add a ton of damage and allow Leoric to keep his Ominous Wraith damage debuff on enemies very often.

Mithril Mace increases Leoric's attack speed, allowing him to deal significantly more DPS and heal himself through Spectral Leech. Once stacked, Leoric becomes a force to be reckoned with.

Buried Alive allows Entomb to deal damage and silence enemies caught within its walls. This can allow you to trap any hero in it as they will be unable to escape alone.

This list of tips and tricks are just a handful of things we think will help your Leoric play. We'll continue to add to the list as required and if you have any tips you'd like to share, let us know in the comments below and we'll place them here.

This list of tips and tricks are just a handful of things we think will help your Leoric play. We'll continue to add to the list as required and if you have any tips you'd like to share, let us know in the comments below and we'll place them here.

1. When you're dead and a ghost, you can teleport back to base for a safe revive.

2. Also when dead, you can use Ossein Renewal to revive quicker.

4. Remember that you will revive wherever your ghost is and before you regain your life, you'll be stationary for a brief moment. Be sure to be somewhere safe when you respawn.

5. Skeletal Swing is still great at softening up a minion wave, especially if it's particularly large. It's strongest however when used against Heroes as it then refunds half the mana cost, while having a 50% reduced cooldown.

6. Don't forget that when you Wraith Walk, your body remains stationary and can still take damage. If you're about to die, end Wraith Walk early by pressing the ability again.

7. Wraith Walk can travel faster than a mount. If you need to catch someone, chase them down before landing Skeletal Swing against them.

8. Wraith Walk allows Leoric to pass through players and enemy gates. Don't be worried about the enemy body-blocking you.

9. You might attack slowly, but your attacks hit hard. Your first two basic attacks will cleave, your third will deal critical damage.