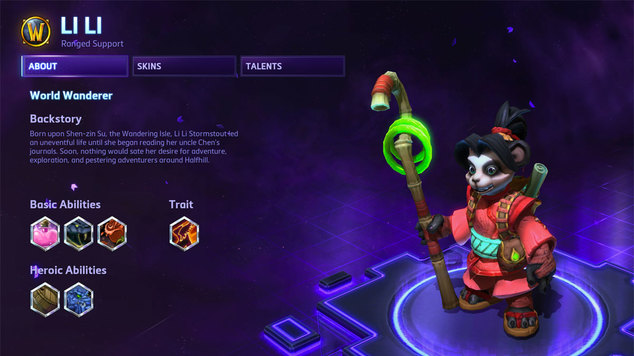 Li Li is a character from World of Warcraft and is a Ranged Support character.  The support that she offers to her team is in the form of small amounts of healing at an almost constant rate over a long period of time.  Li Li can also provide some small amount of damage boost and some enemy debuffing.  Li Li can be extremely powerful on a team, but she does require a lot of skill to get the most out of her. 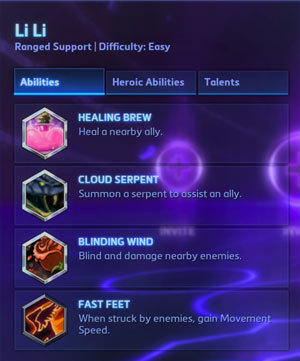 Cloud Serpent (W) [10 second cooldown] – Summons a Cloud Serpent on target ally, that helps them by dealing damage to their target. Lasts for 8 seconds.

Jug of 1,000 Cups (R) [70 second cooldown] – Rapidly tosses out healing brew to all allies within range, prioritizing the most injured and heroes.  Heals a significant amount of health over 6 seconds.

Water Dragon (R) [45 second cooldown] – Summons a Water Dragon that hits the nearest enemy and all enemies near them for significant damage, and slows them by 70% for 4 seconds.

Since Li Li is all about providing small amounts of healing over time, the first talent that you should grab is Conjurer’s Pursuit.  Conjurer’s Pursuit increases your mana regen by collecting the healing globes that drop when the enemy wizards are killed off.  This means that you will need to hang around up front and center for a while to make sure you get those orbs.  The one other option that is viable from this first set of talents is Bribe.  It allows you to bribe mercenary camps instead of fighting them, which can help put a lot of pressure on lanes in the later game.

At this level, Protective Shield is the strongest option.  It allows you to protect someone on your team in an emergency, allowing you more time to heal them (or yourself).  Healing Ward is a fair option as well, but since Li Li can heal a lot already, and since the totem only has 1 health it is easy for the enemy to remove.

At this level the best option is The Good Stuff because it boosts the ability that you will be using the most, Healing Brew.  This talent boosts your healing brew by about 25% and stagers some of the healing over 6 seconds.  When teamed with later talents it gets even better, as discussed later.

At this level you gain access to either Jug of 1,000 Cups or Cloud Dragon.  While it is tempting to grab Cloud Dragon to help provide some damage output, it is better for Li Li to stick with what she does best.  That means that the best option is to take Jug of 1,000 cups, which can put out a lot of healing over a huge area and can keep your team alive through a lot of damage.  It does have a long cooldown though so it is best to use it only as a last resort or in a massive team battle.

At this level you gain access to a decent talent and a great one.  The decent talent is Hindering Winds, which adds a slow to your Blinding Wind ability.  However Shrink Ray is an insanely powerful ability and just can not be passed up.  Shrink Ray reduces an enemy hero to half size and lowers their damage and movement by half as well for 4 seconds.  This may seem like a short amount of time but it effectively removes one enemy from the battle for that time which both lowers the damage that your team is suffering allowing your team to finish off that person or someone else on the enemy team, or allows you to escape from the enemy if you are alone.

This level gives you another must take talent in the form of Two for One.  It doubles up your healing brew creating a second one, for only 50% more mana. Better yet, this talent stacks with the level 7 talent, The Good Stuff.

Your top level talents have only one really good option, which is Jug of 1,000,000 Cups. It improves your basic Jug of 1,000 cups by throwing out two cups at a time instead of one, which doubles up how fast the healing goes out.  It is important to note that it does not boost the amount of healing that the ability does, just how fast it puts it out.

Playing Li Li requires a lot of thought, planning, and movement due to her abilities.  Two of her main abilities, Healing Brew and Blinding Wind, are not targetable directly.  Instead they hit the nearest ally or enemy, which means that to get the most out of them you really need to understand where the players are going to be, how to pick a path to be closest to them when they get there, and actually getting there in time.  This is true from the early game all the way to the late game, and is the key in getting the most out of Li Li.  It will take some time to learn, so don’t expect to get it right away.

In the early part of any match, Li Li is fairly weak, not having much in the way of attacks and no escapes.  It is therefore important to find a lane to help in that will benefit the most from her abilities.  Look for a lane that has an assassin playing in it like Valla, Nova, Raynor, or a weaker melee players like Sonya or Illidan.  If you team up with someone like that early you can turn the tide on that lane by keeping them alive and in the fight, and boosting their damage.  If those players are already ok and have help in their lanes, then helping a strong early game character can be a huge team benefit as well, helping characters like Tassadar, Stitch, or Azmodan that are already strong solo lane players can help your team push down a tower before the mid game even arrives.

Once the mid and late game stages arrive Li Li is all about group play.  She needs to stay near your teams group and keep them up.  She has very little damage potential on her own, and can not really defend or attack by herself.  She does however add a lot in team fights boosting damage output of your team, keeping your team alive with heals, and reducing the incoming damage from the enemy team.  The most important thing is to keep proper position with her.  She needs to be floating around the middle or back of your group so that you can move quickly either to the front to be closest to a wounded front line player or blind an enemy, or move quickly to the back to heal a ranged player or to escape from attack.

While not the easiest character to play well, nor the most powerful out there, Li Li brings a lot to the game and should not be written off as a choice, which unfortunately many players have already done.  Li Li can be exceptionally strong in a match with friends where you are likely to go in knowing what everyone is playing and be in a voice chat to be able to communicate back and forth.