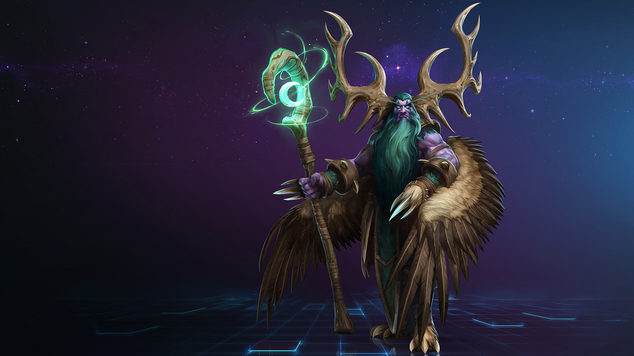 In this Malfurion Build Guide, we provide an overview of his strengths, abilities, talents and a handful of tips and tricks.

Malfurion is a strong healer that can fit in most compositions due to his high sustained healing, root, pseudo-cleanse (Nature's Cure level 7 talent), and Silence through Twilight Dream. He can also increase the throughput of an allied hero with Innervate. Malfurion has a little of everything, enabling him to be a strong choice anywhere.

Malfurion maintains Regrowths among allied Heroes, allowing his Moonfires to heal them per enemy hero hit, allowing for some massive heals if enemies clump too much. This can separate a good Malfurion from a great one. Landing Moonfire on one enemy hero as often as possible is strong but landing it on multiple enemies often can increase his healing significantly.

Innervate (Trait) - Through Innervate, Malfurion is one of the only Heroes that can restore mana to others while also reducing their cooldowns. While you ideally would like to be using Innervate on your most mana-hungry allies, don’t hold it for an ally who is wasting their mana if you have a hero that can greatly benefit from the reduced cooldown rate.

Regrowth (Q) - Regrowth is a small HoT that can give your team a little bit of sustain. While the healing is nice, its main use is to allow Moonfire to heal them. Try to spread Regrowth to allies before the fight starts so you can immediately begin healing them rather than trying to spread Regrowth during a fight.

Moonfire (W) - Moonfire will be your main form of healing allies as when you hit an enemy hero all allies with Regrowth will be healed for a decent amount. Try to hit as many enemies as possible, but dont hold on to it for too long looking for a perfect Moonfire when you could be casting it every 3 seconds on one enemy. The healing this brings over time is massive. It is also a strong tool for checking bushes or dealing some minor poke to enemies.

Entangling Roots (E) - Entangling Roots grows its radius over 3 seconds, rooting anyone who gets caught by it. This can be a great tool for following up CC or zoning an area. Be careful throwing it at unhindered enemies can leave you vulnerable and unable to follow up CC for a long time.

Tranquility (R) - Tranquility offers lengthy healing over time, that can offer some added sustain for longer fights. Tranquility is at its best when it’s healing multiple allies who are affected by your Regrowth (for an armor bonus), so try to position yourself to get the most use out of this Heroic, especially considering its cooldown. Don't be afraid to use this early in a fight as the healing takes time to see strong value.

Twilight Dream (R) - For a Support Hero, Malfurion can put out reasonable damage with the help of Twilight Dream. Aside from the surprisingly high damage numbers, Twilight Dream’s real usefulness is in the form of its silence. Stopping enemy abilities for a full 3 seconds can be incredibly powerful, but it can be difficult to position yourself in a way that will cause this ability to hit the maximum number of targets. Because of this, Twilight Dream is often most effective when it follows another form of crowd control or you need another tool to shut down an enemy team that wants to dive. 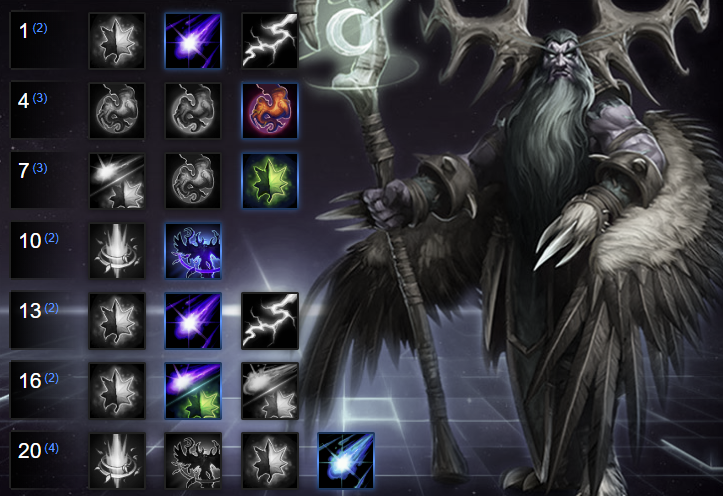 Celestial Alignment allows Malfurion's auto attacks to deal extra damage to enemies affected by Moonfire as well as increasing the duration of Moonfire's reveal. This can add some extra damage to a CCed enemy and allow Malfurion to deal some decent consistent damage.

Vengeful Roots allows Malfurion to summon a Treant after casting Entangling Roots, that will then attack the nearest enemy. This can add some extra damage to the kill target as the Treant deals some fairly high damage.

Nature's Cure grants Malfurion a pseudo-cleanse, allowing him to remove stuns, roots and slows from allies affected by his Regrowth. This can get allies out of sticky situations. Keep in mind that unlike other Cleanses, it does not grant Unstoppable, meaning that it does not remove all CC and does not linger, keeping them immune to CC for a second or so.

Having the ability to silence anyone around you for 3 seconds, while dealing high damage, is incredible. Whether you're being dived by a tank or assassin, Twilight Dream will instantly shut them down and allow your team to deal huge damage with reprisal. Against any melee composition, it's incredible.

Tranquility is a great AOE heal that can add some extra healing and armor to allies during a fight. While the radius is large, it is not global, meaning allies who stray too far will not receive the benefits.

Hindering Moonfire adds some extra CC to keep enemies away or allow your team to chase. The slow is minor but can be kept up almost indefinitely, allowing it to be very annoying over the course of a fight.

Nature's Balance increases Regrowth's duration by 3 seconds, and increases the radius of Moonfire by 25%. It pretty much ensures you can keep Regrowth active on all Heroes at once (including yourself). It also allows for a much easier time hitting multiple heroes with Moonfire, increasing your healing significantly.

Astral Communion allows Malfurion to effectively teleport and cast Twilight Dream at his targeted location. This can allow you to land massive silences on the enemy team, or just allow you to play safe and still follow up CC.

These Hero Threat Levels (1 being lowest threat and 10 being highest threat) are to help you determine which enemy Heroes can give you a headache. For the Heroes listed here, take extra care as they're particularly dangerous for Malfurion.

This list of tips and tricks are just a handful of things we think will help your Malfurion play. We'll continue to add to the list as required and if you have any tips you'd like to share, let us know in the comments below and we'll place them here.

1. Try to place Regrowth on allies before a fight begins.

2. Try to always keep Regrowth active on as many allies as possible.

3. Moonfire will be your main source of healing and should be cast very often.

4. Moonfire is a valuable tool for scouting as it reveals enemies.

5. You don't always have to use Entangling Roots just to lock a Hero down. Use it to zone enemies, tight spaces, or cover a squishy ally from being attacked.

6. Save Twilight Dream for when you're being dived, or when you can safely walk into the enemy team and detonate it.

7. Always hang back in a team fight. Your Moonfire has a good range, and Regrowth if your team are primed before a fight, lasts plenty of time for you to wait back.