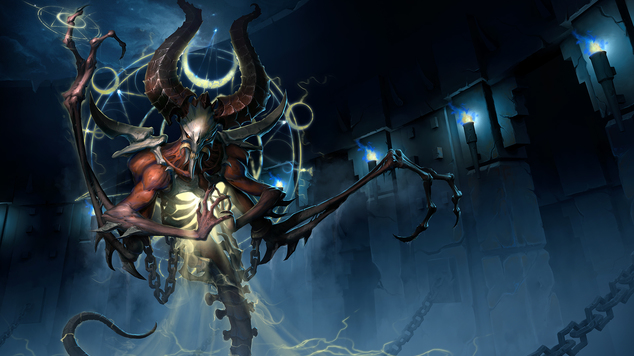 Mephisto is a ranged Assassin that feels somewhat somewhat similar - in principle - to Falstad. While that might sound ridiculous, much of his kit revolves around making his clone dive (similar to Barrel Rol), and/or poking with a single high damage projectile (similar to Hammerang) mopping up with the AOE of Lightning Nova (not too unlike Lightning Rod). Despite some design overlap, they play very differently, and Mephisto finds himself nestled amongst Gul’dan, Jaina and Li Ming.

With high amounts of cleave, a valuable base slow, solid AOE and mobility, there’s no mistaking that in the right hands, Mephisto is a powerful enemy that’s both hard to master, and incredibly rewarding. As long as he plays aggressively, while making maximum use of his dive potential, there's no mistaking that Mephisto will be top-tier.

Lord of Hatred (Trait) - Lord of Hatred doesn’t look an exciting Trait, but it does allow Mephisto to significantly reduce his cooldowns. Every ability you land against a Hero reduces your cooldowns by a fixed amount, so if you can consistently hit multiple foes, your ability up-time can greatly eclipse the likes of Jaina or Kael’thas’. As one example, if you hit 4 players with Skull Missile you’d instantly reduce its cooldown by 6 seconds, ensuring that you only had to wait another 2 (as opposed to 8) to fire it again.

Skull Missile (Q) - Costing very little mana, and with a somewhat low cooldown, Skull Missile is Mephisto’s bread and butter poke. Despite the slight delay before it launches, and its limited range, it can cleave through all enemies and slow all those hit. As long as you land it against someone, it has significant value in allowing you to stick to your target, especially if Lightning Nova is available.

Lightning Nova (W) - Part of what makes Mephisto so strong in group encounters, Lightning Nova is a large radius AOE effect that lasts for 2.5 seconds. For its brief duration, it harms all those inside it every 0.25 seconds. Though the duration doesn’t last long, the fact it can be used with Shade of Mephisto, and considering your cooldown reduction Trait, it’s common to have it constantly available. Ideally you want to use it when you can hit multiple foes, and immediately after teleporting into the enemy team.

Shade of Mephisto (E) - Providing mobility for Mephisto, Shade of Mephisto grants a brief projection of himself that allows him to cast any ability he has. What’s great about this is the fact it makes Mephisto a particularly aggressive Hero. When your Shade is active, you can do all that you normall can, but will zip back to your original location when it expires. Just be conscious of the fact that clever players will wait for your real body to materialize.

Consume Souls (R) - Undoubtedly his best Heroic, Consume Souls is effectively a delayed detonate that allows Mephisto to lop off a large amount of health to all the enemy team, regardless of sight. The fact the delayed attack also causes a 40% slow ensures Mephisto can punish those trying to escape, or seriously restrict those sticking around to fight. Ideally, use it towards the end of a team-fight to mop up, as you’ll be unable to move while it’s channeling.

Durance of Hate (R) - Durance of Hate has a lot of potential, and I’ve often seen it used effectively. That said, I’d consider it to have less value than Consume Souls simply because it deals so little damage. It’s a Heroic to control an area, but its limited root time (2 seconds) leaves it challenging to use in an uncoordinated setting. That said, if you can land the root in a confined space, before diving with Shade of Mephisto/Lightning Nova, you’ll often clean up. 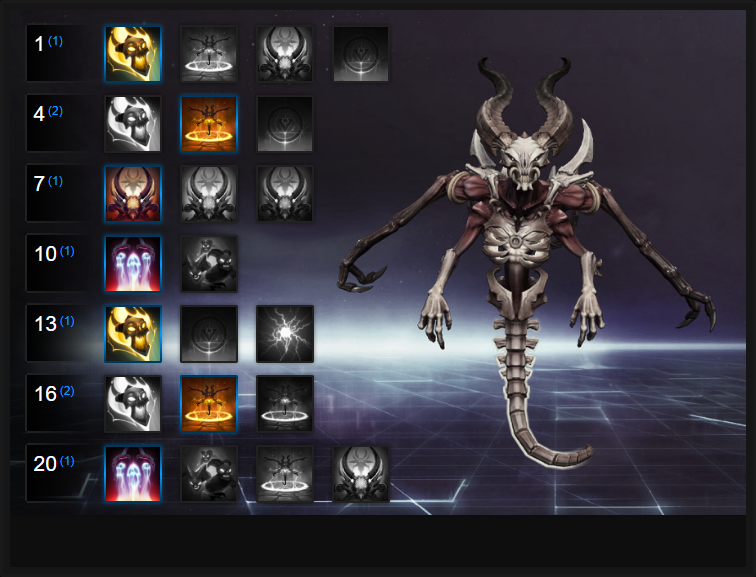 When Mephisto's dive abilities are on cooldown, he needs Skull Missile to continue to poke until he can use Shade/Lightning Nova again. Unyielding Power allows him to not only increase Skull Missile's damage, but to also lower its cooldown to 3 seconds. You'll need to hit 40 Heroes to achieve it, but it only takes around 8 minutes.

Providing Mephisto with a shield when Lightning Nova ends, and the shield value is based on 50% of how much damage your Nova deals. Better still, it lasts for 7 seconds, allowing you to acquire significant shielding. For playing aggressively, Static Barrier is brilliant.

Ghastly Armor further increases Mephisto's "tankiness", allowing him to obtain 20 armor while his Shade is active, lasting for 2.5 seconds afterwards. Combined with the shielding on Static Barrier, Mephisto is particularly tough to bring down.

A no-brainer. Consume Souls is amazing for cleaning up when the enemy team are low, and it allows your team to keep an eye on anyone that's low, and escaping thanks to the vision it provides.

Abhorred Skull grants Mephisto 20% increased Spell Power when he lands Skull Missile. The bonus lasts 6 seconds, and with your level 1 Quest completed, grants a 3 second window for you to maintain the buff.

Variable: Considering Consume Souls has a lengthy cooldown (120 seconds), Hysteria is a must. Allowing your Trait to lower the cooldown of your Heroic ability, it ensures you'll have it available much more often. Never a bad thing.

When you complete the quest for Lightning Nova (increasing its bonus damage by 40%), Static Field allows Mephisto to deal 12% of a Heroes maximum health as additional damage to anyone inside it. When you dive, it's an amazing amount of bonus damage.

Consumed By Hatred allows Mephisto's Heroic to deal 10% of a target's missing health as additional damage when cast. For anyone who's already low, this can often finish them off. Best of all, if a Hero dies in your first cast, Consumed By Hatred will cast again 1 second later for a second round.

This list of tips and tricks are just a handful of things we think will help your Mephisto play. We'll continue to add to the list as required and if you have any tips you'd like to share, let us know in the comments below and we'll place them here.

2. It's often a good idea to use Skull Missile before Shade of Mephisto/Lightning Nova, as this'll keep an enemy slowed while you trap them in your radius.

3. Skull Missile will pass through all enemy Heroes, so it's a good idea to use it when you can tag multiple. That way, you'll shave significant time off all your cooldowns.

4. Lightning Nova can have its damage increased by 40%, for 4% each time you hit Heroes. Try to always be in amongst enemies by using Shade of Mephisto for risk-free dives.

5. You can die while in Shade of Mephisto, but it's near impossible. The 2.5 second duration ensures that by the time you've travelled, you'll be back at your starting location even if you're hit with tons of CC.

6. Remember that enemy players can see where you'll return to after Shade of Mephisto expires. Try to ensure you're far from the enemy, or in a bush/vent.

8. When using your Heroic, take into account you can't do anything for 2.5 seconds while it's casting. Find a safe spot to use it.