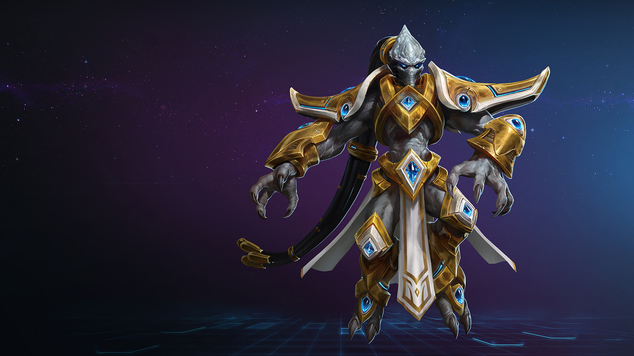 In this Tassadar Build Guide, we provide an overview of his strengths, abilities, talents and matchups.

Tassadar is a ranged assassin Hero that can provide strong damage at long range. He is very immobile, struggling against dive compositions, but with some peel from his team, he can deal incredible damage from afar. The longer he auto attacks, the more mana regen he has, allowing him to keep up the pressure. If enemies overstep or are looking to rush in, Force Wall can stall them, giving you time to look for a kill or reposition.

Resonance Beam (Trait) - Tassadar's auto attack is channeled and slows by 10%. While attacking, his auto attack damage and mana regeneration increases over 4 seconds. When fully charged, he gains an additional 3 mana every second. If he spends 6 seconds without attacking he loses his charge. This allows Tassadar to gain a ton of mana as long as he can charge his beam then tap an enemy every 6 seconds. This can charge off of anything, including minions, buildings, walls, etc. Try to keep this charged for the mana regeneration as much as possible in fights.

Shock Ray (Q) - Tassadar channels to send a beam forward, dealing damage and slowing enemies hit. This ability deals fairly strong damage on a fairly short cooldown, allowing Tassadar to keep some pressure on enemies. This ability has a short wind up and takes about 1 second to fully channel the beam. Make sure you are in a safe position when casting as you cannot cancel it mid cast.

Psionic Storm (W) - A strong AoE damaging ability. Psionic Storm deals more damage with each consecutive tick of damage on the same target, making it very strong against CCed targets. This is also a great ability for clearing minion waves. It has a fairly short cooldown, so don't be afraid to throw it out often.

Force Wall (E) - Tassadar creates a wall perpendicular to where he is facing after a 0.5 second delay. This wall stops all units from pathing through it for 2 seconds. This can be great for keeping enemies from escaping or approaching. Just keep in mind it has a 21 second cooldown, so use it wisely. 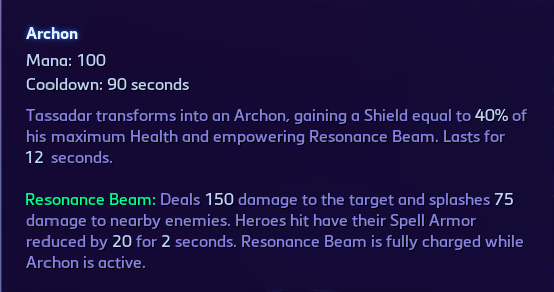 Archon (R) - Archon transforms Tassadar into an Archon and gains a large shield. For 12 Seconds, his auto attacks are empowered and deal AoE Damage, as well as reducing spell armor of enemy heroes hit. This is a great tool for pressuring enemies that like to push up close, or just dealing high consistent damage for 12 seconds.

Black Hole (R) - Tassadar throws a Black Hole forwards that pulls enemies towards its center. If enemies touch the center, they are
stunned and take damage. This is a great tool for cancelling enemies abilities or setting up some high burst. Shock Ray can easily hit multiple enemies when they are stacked and Force Wall can keep enemies from walking out of the pull.

Static Charge increases the damage of Shock Ray by 4 for each enemy hero hit as well as gives 33% Resonance Beam charge per enemy hero hit. This can speed up charging during fights as well as add some extra damage later in the game.

Plasma Shield grants Tassadar a shield equal to 3% of his max health per second, up to 15% when he is at maximum charge. This shield can negate most of enemies poke, and since Tassadar likes to play at the back of fights, is perfect for keeping him healthy.

Alternative - Induction (for when you need to be faster)

Induction increases Tassadar's movement speed whenever he uses Shock Ray, with move movement speed if he hits a hero. This can allow him to reposition after a Shock Ray if enemies look to approach during his cast.

Beam Alignment allows Tassadar to half the cooldown of Shock Ray and increase his basic attack range by 1 whenever he is at full charge. This can add a ton of extra damage as well as make it easier to stay charged.

Archon provides Tassadar with some sustained damage and survivability. Transforming him into an Archon, Archon allows him to not only deal high damage with his auto attacks, but also reduce enemy spell armor and gain a large shield. During Archon Resonance beam is always fully charged, granting him its benefits.

Alternative - Black Hole (for when you just want a wombo combo)

Black Hole is Tassadar's choice for a large burst. He throws out a black hole that pulls in enemies. If they touch the center, they are stunned and take a large amount of damage. This can allow a follow-up of Shock Ray and Psionic Storm to deal incredible damage. Force Wall can also be used with it to stop enemies from walking out of the pull and escaping the center hit.

Shadow Walk allows Tassadar to become invisible and unable to attack or use abilities for 1.5 seconds. During this time, he gains 25 armor and 40% movement speed. This is a similar but slightly weaker version of Dimensional Shift, but very strong regardless. This allows Tassadar to escape some sticky situations and give him an escape.

Thermal Lance allows Tassadar's Shock Ray to deal an additional 8% of an enemy hero's health to the first enemy hero hit per cast. This can add a ton of extra damage and allow Tassadar to pressure tanks very well.

Twilight Archon allows Tassadar's auto attacks while in Archon to extend Archon by 2 seconds. This can allow Tassadar to keep Archon up indefinitely as long as he can attack.

These Hero Threat Levels (1 being lowest threat and 10 being highest threat) are to help you determine which enemy Heroes can give you a headache. If a Hero is listed in this Deathwing build, take greater care to play around them.

This list of tips and tricks are just a handful of things we think will help your Tassadar play. We'll continue to add to the list as required and if you have any tips you'd like to share, let us know in the comments below and we'll place them here.

1. Stay at the back of fights and deal damage from afar. Tassadar has very limited mobility to escape.

3. Tassadar gains a ton of mana if he can keep his Resonance Beam charged. Tag enemies every once in a while to keep charged.

4. Shock Ray and Psionic Storm both have fairly short cooldown. Use them often to keep pressuring enemies.

6. Shock ray cannot be cancelled by you and takes about a secon to fully channel, make sure you are safe enough when using it.