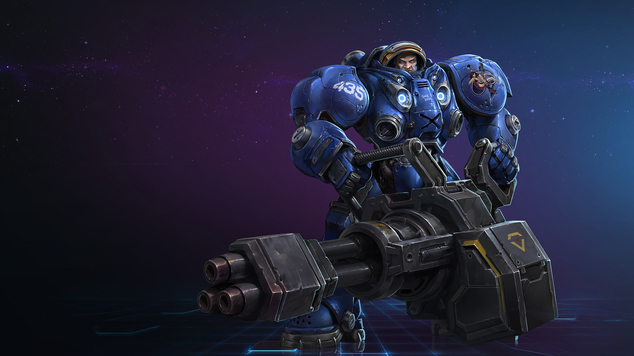 Tychus utilises a Minigun to deal very high single target damage, able to burst a kill target that is locked down by your team. While Minigun is on cooldown he can pressure with Overkill and Frag Grenade, softening enemies for the next kill attempt with Minigun. Tychus is a great choice in compositions where you are looking to lock down and kill one specific target or when enemies have a lot of high health or armor heroes such as Deathwing or Garrosh. Just keep in mind Tychus has a shorter attack range than most ranged assassins and should look to engage after your team has engaged.

Minigun (Trait) – Minigun causes Tychus's basic attacks to deal additional damage equal to 2.5% of the enemy hero's maximum health. This bonus damage can equal up to 30% of the enemy heroes health, allowing you to quickly execute CCed enemies. It can also be used on enemies that have already used their mobility to engage as they will be unable to retreat quickly, allowing you to fill them full of lead. Try to save Minigun for CCed or overextended enemies as if you fire it too soon, enemies can step back and wait it out, before diving in.

Overkill (Q) – This is what you count on for damage output when you need mobility or Minigun is on cooldown. Not only will Overkill deal fairly high amounts of damage if kept on the same enemy, you can re-target it if your original foe moves out of range. On top of that, you’re free to move and use other abilities while it’s channeling. Keep in mind that like any other channel, you can be interrupted if you’re not careful. Also notable is that the cooldown starts as soon as Overkill is activated, so if you get the full 4 second duration, it’s actually a 8 second CD instead of 12.

Frag Grenade (W)– An ability with several uses, Frag Grenade gives you the crowd control you need to ensure your positioning stays strong. You can throw it behind an enemy to knock them towards your team, or in front of them to make sure they can’t get to you. Just keep in mind the travel time increases the further away you throw the grenade, and you’ll sometimes want to hold on to it to interrupt important channeled abilities. It's particularly effective against E.T.C to prevent a Mosh Pit. Be aware that by default, its range isn't long and while great at finishing off a low health enemy, do try to save it to protect you or an ally.

Run and Gun (E) – If you’re looking to secure a kill and you know an enemy is alone, feel free to dash in. However, most of the time you’ll be using Run and Gun more defensively to re-position yourself in team fights. Just be aware that Run and Gun has a relatively long cooldown. Don't waste it by chasing a Hero you want to kill, before leaving yourself vulnerable.

Commandeer Odin (R) – There’s no mistaking when Tychus has called down Odin, due to a lengthy start-up animation. Because of this, be careful about when you activate your Heroic, making sure that the team fight will continue, and will still be in range of you, once you’re ready. That said, Odin can be a huge game changer. The basic attacks are extremely strong, and the abilities he can lay down are a pain as well. Keep in mind that Odin’s abilities share separate cooldown from Tychus’ abilities, so use that to your advantage.

Drakken Laser Drill (R) – When utilized properly, the drill can deal significant amounts of damage. However, it does require some team coordination to play around, as enemies can easily kite away from it and fight outside its range if your team doesn’t keep them in place. In coordinated team play, the drill may be the way to go. However, Odin offers more flexibility, and is usually the correct choice. 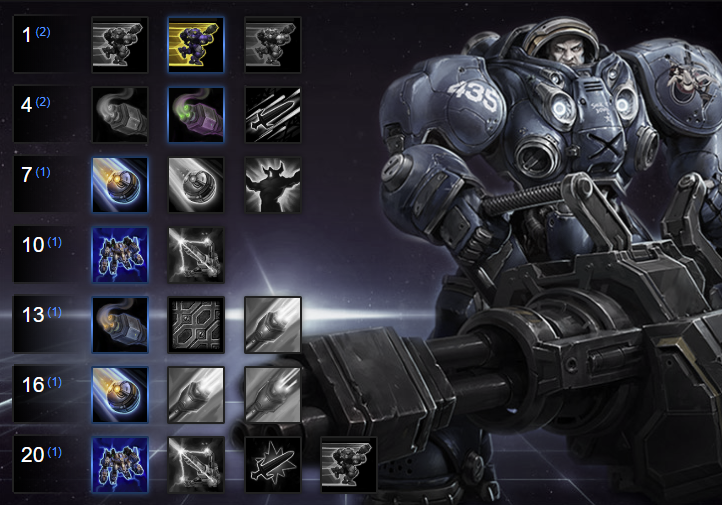 Tychus is fairly immobile and has a short basic attack range, forcing him to walk close to the enemy team to deal damage. Dash allows Tychus to reposition much easier with Run and Gun by increasing the dash range and granting movement speed.

The Bigger They Are... increases the damage modifier of Tychus' Trait from 2.5% to 4%, it allows him to rip through targets with ease. This allows your trait to deal up to 48% of the enemy's maximum health, dropping them low enough for your team to finish them off or force them out of the fight.

Tychus relies massively on his Trait as it is his main form of killing heroes in fights. In the Rhythm allows you to elongate Minigun's duration by 0.03 seconds for every basic attack you land on an enemy hero while Minigun is active. It doesn't sound a lot, but it stacks over the course of a fight and becomes easier to stack as it lasts longer.

Quarterback allows Tychus to throw his grenade from 50% further away. It can be great for chasing enemies down, poking from afar or for a skilled knockback.

Relentless Soldier rants 25% armor for 3 seconds when Tychus is stunned or rooted. This can greatly increase your survivability when you are the target in fights.

Commandeer Odin increases Tychus' basic attack range by 100% as well as granting a slower but much more damaging attack and different abilities, able to deal massive damage from long range. This is a great tool for teamfights as Tychus in Odin is much stronger than other heroes for the duration.

That's the Stuff makes Minigun heal Tychus for 100% of the damage it dealt when it ends, allowing Tychus to heal for a huge amount especially when paired with The Bigger They Are...

Variation - Neosteel Coating (for when you need to survive spell damage)

Neosteel Coating allows Tychus gain 75% spell armor for 3 seconds, allowing him to mitigate a large amount of incoming ability damage, providing some much needed relief from high spell damage Heroes such as Kael'thas and Li Ming.

Titan Grenade allows Frag Grenade to deal additional damage equal to 5% of the enemy hero's health. This can add some extra burst to finish off the kill target after Minigun has done its job.

Extending the duration of Odin by 50% while also allowing Ragnarok Missiles to launch a Nuclear Missile, Big Red Button allows Tychus to pressure for longer, while dealing massive damage. The extra duration also makes it very difficult for enemies to wait it out.

These Hero Threat Levels (1 being lowest threat and 10 being highest threat) are to help you determine which enemy Heroes can give you a headache. For the Heroes listed here, take extra care as they're particularly dangerous for Tychus.

This list of tips and tricks are just a handful of things we think will help your Tychus play. We'll continue to add to the list as required and if you have any tips you'd like to share, let us know in the comments below and we'll place them here.

1. Minigun can deal incredible damage on CCed or caught enemies. Wait for your team to CC or for the enemy team to use their mobility to blow them up.

2. Frag Grenade can cancel many channeled abilities such as E.T.C.'s Mosh Pit.

3. Your Overkill allows you to continue firing while moving. You'll also be able to deal splash damage to anyone near your main target. Use it to deal damage while repositioning or when Minigun is on cooldown.

4. If you're going into a team fight and have your Heroic ability ready, make sure you use it a little bit early to take account for the build time.

5. Tychus is very strong against teams with two or more Warriors, but he can be just as strong in compositions that want to CC and blow up one target.

6. Try to always position yourself in a team fight so that you can use Minigun and then freely deal damage, without moving. This will be near your frontline so that when they engage, you can follow up with Minigun on the CCed target.

7. Tychus often works best with teams with a lot of CC so he can use Minigun to its full effect without worrying about a counterattack.