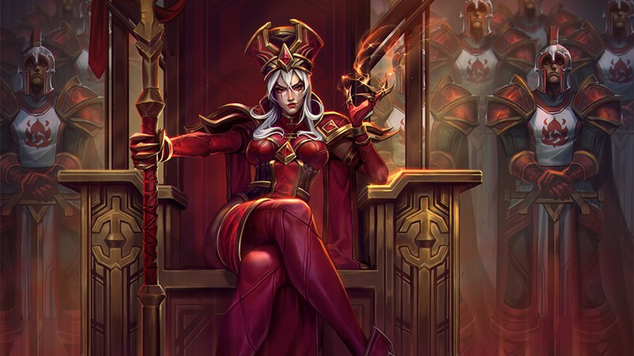 In this Whitemane Build Guide, we provide an overview of her strengths, abilities, talents and matchups.

Whitemane is a unique healer that must deal damage in order to heal her allies, much like Discipline Priests in WoW. She applies Zeal to allies through Desperate Plea, Clemency, and Scarlet Aegis. Whenever she deals damage to enemy heroes, all allies with Zeal are healed as well. This forces her to stay within range of enemies to heal her team but also mean she can deal some considerable damage during a fight.

Unlike other Support Heroes, Whitemane only has mana costs on her Q, Desperate Plea, her main Zeal generator. Her other basic abilities provide damage to heal allies affected by Zeal. Desperate Plea costs more mana the more often you cast it within 4 seconds, forcing her to balance healing multiple allies with her mana. Being efficient means healing less targets, but healing more targets can drain your mana very quickly.

Zeal (Trait) - Whitemane's trait has two parts. The first part is Zeal which is a buff that's applied to allied Heroes when Whitemane casts healing abilities on them. When Whitemane deals damage to enemy heroes, all allies with Zeal are healed. With Zeal lasting for 8 seconds and the Desperation debuff Desperate Plea causes lasting only 4, you can comfortably juggle 1 heal on an ally for very little mana cost. However, when you want to maintain Zeal on multiple targets the cost of Desperate Plea can be very high.

The second part of her trait is that she can activate it to gain 25% spell power and lose 25 armor for 5 seconds. This can allow her to deal 25% more damage and 25% more healing but also makes her take 25% more damage for the duration. Use this when you know enemies cannot capitalize on it or if you desperately need healing.

Clemency (1) - Clemency allows Whitemane to cast Inquisition on an allied hero, healing them over 3 seconds. This gives Whitemane another heal that she can use out of a fight to top off allies. It is also another way to apply Zeal to allies if you will not need Inquisition for damage (and through the damage, healing to allies with Zeal). It also removes a stack of Desperation, allowing Whitemane to save some mana if she weaves it in between Desperate Plea casts.

Inquisition (W) - Inquisition is a channeled ability that slows and damages an enemy over 3 seconds. This deals fairly high damage, allowing Whitemane to heal all of her allies with Zeal for a significant amount. Just be conscious of the fact Inquisition can be interrupted, so it's best to use it when you're in a safe position or close enough to your tanks to let them peel for you. Ideally, you want to cast this on the kill target and help secure a kill, but that is often risky and can also just be cast on the nearest enemy to heal your team.

Searing Lash (E) - The damage on Searing Lash isn't massive, but can be cast often and deals AoE damage, allowing Whitemane to hit multiple heroes. This can add some significant damage and healing. Don't be afraid to cast this as often as possible as the cooldown is short and will be a large part of your damage, and through it, healing.

Scarlet Aegis (R) - Scarlet Aegis provides a fairly small AoE heal and a considerable amount of armor for 4 seconds. Since this heroic heals, it also applies Zeal to all allies hit, allowing you to do some significant healing by damaging enemies. Try to cast this earlier rather than later as the armor is a huge part of this heroic but it can also be used just to apply Zeal to allies if you are in a sustain war with the enemy team. Just be conscious of the fact it has a small radius, so you'll often need to be in amongst your team to maximize its value.

Divine Reckoning (R) - Her aggressive Heroic, Divine Reckoning is a damage over time ability that can be cast from a reasonable distance. Capable of dealing solid damage, its primary value is to heal multiple teammates quickly through Zeal. This can deal considerable damage (and healing) if enemies are hindered by your team. This can also be a great option if you are struggling to preserve your mana as Divine Reckoning can return a ton of mana if it deals damage. 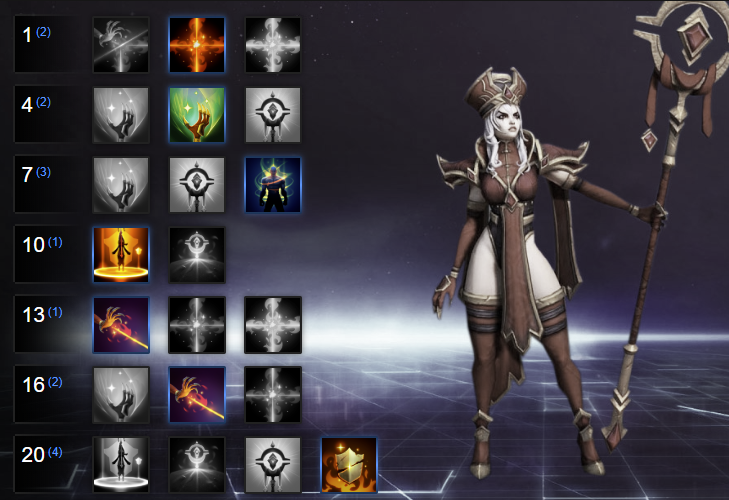 Righteous Flame increases Searing Lash's damage by 25% and by 50% against enemies that are stunned, slowed, silenced or rooted. Since you can guarantee a slow through Inquisition, Righteous Flame can almost always deal 50% increased damage, increasing your damage and through it, sustain.

Martyrdom increases Desperate Plea's healing by 30% and an additional 10% per active Zeal. This is simply a solid passive healing increase. It also increases your burst healing if you ever need to cast Desperate Plea on one target multiple times.

Intercession provides Unstoppable for 1 second on a 60 second cooldown. Like most cleanses, this can be very powerful for saving an ally who is CCed or allowing an ally to deal their full damage unimpeded. Keep in mind that you do gain a stack of Desperation when cast, so try to cast Desperate Plea first, allowing the stacks to drop with your other Desperation.

Scarlet Aegis heals all nearby allies and grants them 40 armor for 4 seconds. This is a great way to shut down an enemy dive or simply apply Zeal to all nearby allies, allowing you do pump out some very high healing.

Subjugation reduces the damage that enemies deal by 50% when affected by Inquisition. This can greatly reduce the burst of a mage or just slow down the damage of any enemy DPS, keeping your team alive a little longer.

Lashing Out allows Whitemane to set Searing Lash's cooldown to 1 second if she hits an enemy hero with the second lash. This can add a ton of damage and sustain if your team has consistent CC such as Arthas's Frozen Tempest.

Shared Punishment allows Inquisition to also damage one more enemy hero near your original target for slightly less damage. This can add some extra sustain as well as apply Subjugation to two targets at once.

Radiance Allows Whitemane to heal all allies with Zeal when she reaches 3 stacks of Desperation. This can significantly increase her healing if she aims to gain 3 stacks often. Just make sure to watch your mana as you will not be able to sustain gaining 3 stacks forever.

Purge the Wicked gives Whitemane another ability that deals high damage over time and reduces the armor of enemies affected by 3 25% for 3 seconds. This can add a ton of damage to the kill target as well as a ton of healing to allies with Zeal.

These Hero Threat Levels (1 being lowest threat and 10 being highest threat) are to help you determine which enemy Heroes can give you a headache. For the Heroes listed here, take extra care as they're particularly dangerous for Whitemane.

This list of tips and tricks are just a handful of things we think will help your Whitemane play. We'll continue to add to the list as required and if you have any tips you'd like to share, let us know in the comments below and we'll place them here.

1. Zeal lasts for 8 seconds, while the debuff you gain when casting Desperate Plea, Desperation lasts only 4.

2. Whitemane's mana bar will predict the mana she'll lose if she casts Desperate Plea. Watch the red bar on your mana bar, and make sure the Desperate Plea is worth the cost.

3. Desperate Plea is the only ability Whitemane has that costs mana.

4. Try to use Inquisition when you have an active Zeal (or two) as its damage output is high, for a strong heal to those affected.

5. Outside of Talents, Inquisition is your only form of crowd control, but it won't help you if you're being dived: positioning yourself correctly will.

6. Without hitting a Hero with Searing Lash, its second cross of damage won't trigger. Take into consideration the minor delay before it lands to ensure you hit someone.

7. Scarlet Aegis only has a 1 minute cooldown. Don't be afraid to use it often: it has a huge impact on a fight.