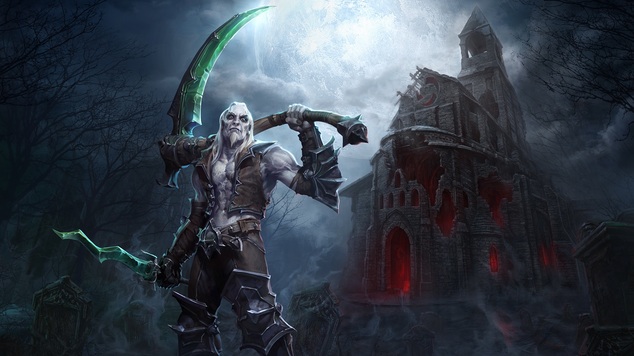 Xul is a powerful melee Specialist that has the potential to take on most enemy Heroes and win. With unrivalled lane clear thanks to his ability to summon skeletons and cleave minions, there are few who can better him in lane.

Unsurprisingly and as a melee Specialist, Xul can struggle against ranged opponents. Fortunately for him he has Bone Armor by default, an active ability that allows him to gain shielding  to withstand incoming attacks.

Xul can be challenging to play against organised teams because as a melee Hero, being on the front line leaves him very vulnerable to spikes and crowd control. Despite that, Xul does have access to a ranged attack in Spectral Scythe, allowing him to poke from afar while cleaving through multiple enemies.

Finally, Xul is strongest on small Battlegrounds where he can roam between one or two lanes. This allows him to make maximum use of his trait by cleaving, summoning skeletons, and rotating.

Raise Skeleton (Trait) - Killing a nearby minion allows Xul to summon a Skeleton Warrior that will fight alongside him for a brief time. Lasting up to 15 seconds, you can only have 4 active at any one time, with talents allowing you to upgrade to 6 or have your Skeleton Warrior's explode upon death. You should note that when not in lane, Xul can't really make use of his trait as there are no minions to kill. I'd also recommend that to really maximize your push potential, you need to be rotating between two lanes (mid and top or mid and bottom) to ensure a double-push of skeletons.

Bone Armor (Active) - Available from level 1, Bone Armor is an active ability that provides Xul with a Shield equal to 25.00% of his maximum Health for 3 seconds. Even if you don't lose that shield when fighting, it will still disappear after the time period. With a lengthy cooldown (30 seconds), you need to ensure you use it at the right moment. When upgraded it can slow attackers, deal damage to them or allow you to evade. You should adapt your choice of talent based on the opposition.

Cursed Strikes (W) - Providing an unrivalled ability to cleave minions, Cursed Strike allows you to deal AOE damage to enemies in front of you. In addition to this, it also slows down the attack speed of enemies struck by it (40% for 2 seconds). If you can, try to use Cursed Strikes against groups of enemies, whether Heroes or Minions. Used against melee Heroes, it'll absolutely destroy them (Illidan, Sonya or Butcher). It's worth noting however that Cursed Strikes doesn't provide any additional damage, or - by default - allow you to attack quicker. Simply put, it grants Xul cleave damage on your basic attacks, and an attack speed reduction only.

Bone Prison (E) - Without doubt one of the most useful abilities in the game, Bone Prison causes a delayed root after 1.75 seconds. Unlike other roots that are skill shots, this is targetted meaning if you do land it, it's gaurenteed to trigger: be sure that your team capitalizes on this. Finally, it's important to note that the range of Bone Prison is tiny so you have to put yourself in harms way to use it. If you can, try to not only use it on a high value target, but a

Poison Nova (R) - A point-blank AOE heroic that causes high damage over ten seconds, Poison Nova causes high pressure on the enemy team. If used alongside another heroic such as Graviton Surge or Mosh Pitt, it can cause significant problems for any team. The one downside to Poison Nova is simply the fact healing over time from heroes such as Malfurion, Stukov or Lucio mitigate a large chunk of its power. Ideally you want to use it late in a team fight, when most heroics have been used.

Skeletal Mages (R) - Probably the safer and better of the two heroic abilities, Skeletal Mages casts a line of them at a position of Xul's choosing. While the slow is reasonable (30%) the Skeletal Mages are amazing for zoning enemy players. The long line ensures anyone near is slowed, it triggers Xul's later level talents (see below) and also deals reasonable damage. If you can, try placing Skeletal mages between the enemies frontline and their backline, ensuring both parties are hit. 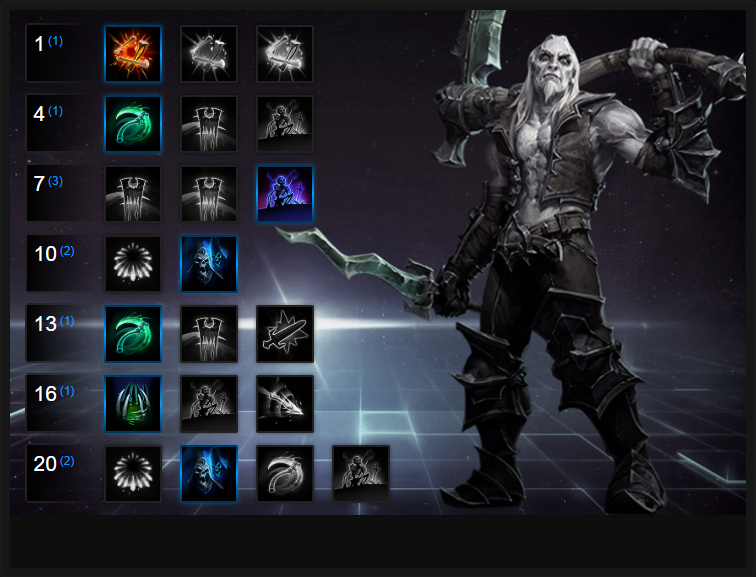 Backlash allows Xul to deal 12% maximum health damage to all enemies around him when his Bone Shield is destroyed. It's a massive amount of damage and one that can comfortably eat a chunk of an entire teams health if Xul is in amongst the crowd.

Variable: Shakler is a good talent for Xul and although it only slows, it allows you to deal greater damage late game thanks to some select talent choices (see below). What's also particularly good about Shakler is the fact slowing enemies reduces its cooldown, allowing you to maintain it for much longer.

Jailors is great early game, but late game Xul really needs to be able to poke often in team fights. Having Spectral Scythe with a 3 second lower cooldown, thanks to Reaper's Toll, ensures he can attack from afar much more often, without having to risk diving in. When he hits 13 with Echoes of Death, this helps massively.

Jailors allows Xul to summon 2 Skeletal Warriors when he uses Bone Prison on an enemy hero. As a quest talent, you need to summon 80 Skeletal Warriors in order to also have your summons focus with 50% greater attack and movement speed. For zoning, pressuring a single target and adding extra bodies into the mix, it's a solid pick.

Trag'Ouls Essence provides Xul with an amazing amount of sustain. Every time he summons a Skeletal Warrior and they attack an enemy, he restores 1% of his maximum health, and 0.4% of his maximum mana. It scales well, works with Jailors and you can last a long time without tapping a Fountain thanks to their return.

Variable: If you're on a particularly large Battleground with few opportunities for laning, Harvest Vitality is a good alternative. As is also pretty normal in Heroes of the Storm, players tend to group up. Harvest Vitality allows you to gain a significant amount of health every swing against enemy Heroes, giving you some much needed sustain. Best of all, this health return can critically hit with later talents, providing amazing returns.

Skeletal Mages are amazing versus melee heavy compositions or Heroes that lack mobility. It's also a brilliant tool for area denial and if the mages are left unchecked, does deal good damage. What's also important with this build is the fact Skeletal Mages cause a slow, allowing your level 13 talent to trigger constantly during a team fight, which in turn provides greater spike healing from Harvest Vitality (when Cursed Strikes is active).

Allowing Xul to summon two additional Spectral Scythes either side of his first, a brief moment later, Echoes of Death allows Xul to deal a surprisingly high amount of AOE damage. Although their damage is reduced to 75% of a "real" Spectral Scythe, they still allow Xul to deal considerable AOE pressure as long as your first cast - and the location of your Spectral Scythe - is well placed.

Anyone caught by Bone Prison will be vulnerable, taking 25% increased damage for 1.75 seconds. For pure burst against a single target, Amplify Damage is amazing.

Variable: Purely for greater AOE damage against a minion wave or group of enemy heroes, Bone Spear is a valuable pick. Its damage isn't incredible, but it has a low cooldown and can finish off low health players with ease. It also cleaves through heroes and minions, allowing you to wipe a wave or snag multiple low health players.

Raised Mage increases the slow duration of your Heroic from 30 to 50%, but also allows your summoned Skeletal Warriors to slow enemies they hit by 30% for 2 seconds. This pairs amazingly well with your Bone Prison summons.

Variable: Against any team with two healers, take Mortal Wound; it's almost mandatory. Any enemies struck by Spectral Scythe will have their healing reduced by 75% for 4 seconds. Against Malfurion or Rehgar it's just incredible - even more so on maps that need sustain. Take Mortal Wound!

These Hero Threat Levels (1 being lowest threat and 10 being highest threat) are to help you determine which enemy Heroes can give you a headache. For the Heroes listed here, take extra care as they're particularly dangerous for Xul.

This list of tips and tricks are just a handful of things we think will help your Xul play. We'll continue to add to the list as required and if you have any tips you'd like to share, let us know in the comments below and we'll place them here.

1. Skilled teams will have Xul rotate with them (as a 4 stack) between mid and top, or mid and bottom lanes (on small Battlegrounds). You don't have to dismount to have your trait create Skeletal Warriors as long as you're near the minion wave. This allows your team to do the work, while you quickly rotate.

2. Skeletal Mages simply walk forwards when summoned and create a greater volume of minions in a lane. It allows them to push the opposing minions and deplete Tower ammo quickly.

3. Bone Armor is obtained at level 1 but has a relatively lengthy cooldown. Only use it when you know you need to mitigate damage.

4. Xul is super mana hungry during early game. Only use your ability in lane if you have a fountain, or won't need mana for some time.

5. Any Hero that has serious ranged potential can eat Xul for breakfast, even with his Bone Armor. Play smart and attack them when they're already engaged.

6. Xul isn't amazing at clearing camps because he can't trigger his trait. If you plan on taking a camp, be sure to have your Bone Armor and cooldowns ready.

7. Xul pairs amazingly well with Rehgar as his Lightning Shield combined with his Totem slow allows you to deal lots of damage to enemies affected.

9. Bone Prison has a very close range requirement - be sure to use it on squishy targets such as Li Ming or any healer. Have your team attack them once it triggers.

10. Xul is strongest when in lane thanks to his trait. Be sure to always split-push when you can and force those towers down while your team keeps the enemy busy.

11. Against single targets Cursed Strike appears relatively pointless because the cleave component won't do anything. However, its strength is in the fact that it reduces the attack speed of those affected by 40%, and provides you with healing. Even 1 on 1, trigger it and grab the sustain.

12. Skeletal Mages has a very low cooldown, don't be afraid to use it on a camp if you have the time to spare as it'll allow you to clear it quickly before moving back to a lane.

13. Always aim Spectral Scythe for where you expect your Bone Prison to erupt, to ensure once they're rooted they take immediate damage.

14. Try to always follow or body-block a player when you cast Bone Prison and your Bone Armor. It'll allow you to gaurentee the explosion damage, while still landing basic attacks.

15. Engage with Spectral Scythe but don't just run in. Even with your Bone Armor, you can be focused and killed quickly.