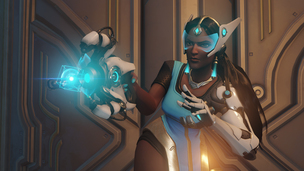 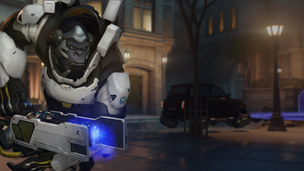 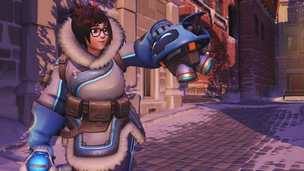 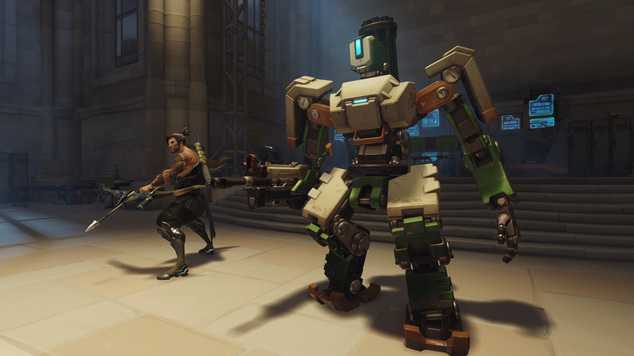 Bastion is a Hero many players love to hate. Personally, I absolutely adore him and in the right hands he can be incredibly frustrating to fight against. As a Battle Automaton, his role is to hold a specific area utilizing his ability to transform into an immobile turret. In principal it's similar to Torbjorn's, the only difference is the fact you have to aim it yourself and the rate of fire is quicker.

Due to the strength of Bastion while he's transformed into a sentry turret, he has a weak-spot on his back that makes him particularly vulnerable. In addition, the fact he cannot move while in Configuration: Sentry ensures that teams who know where he is can comfortably uproot or kill him with ranged attacks. Part of his playstyle involves working around this, not only by choosing locations that the enemy don't expect you to be in but once they know where you are, moving quickly to surprise them. Bastion is at his best when he surprises the enemy or if he's being looked after by his team and if he has a Reinhardt and Mercy with him, he can be incredibly difficult to uproot or kill.

Once a frontline combatant in the devastating Omnic Crisis, this curious Bastion unit now explores the world, fascinated by nature but wary of a fearful humanity.

Originally created for peacekeeping purposes, Bastion robot units possessed the unique ability to rapidly reconfigure themselves into an assault-cannon mode. But during the Omnic Crisis, they were turned against their human makers, forming the bulk of the omnics' rebel army. Following the resolution of the crisis, nearly all of them were destroyed or disassembled. To this day, Bastion units still symbolize the horrors of the conflict. 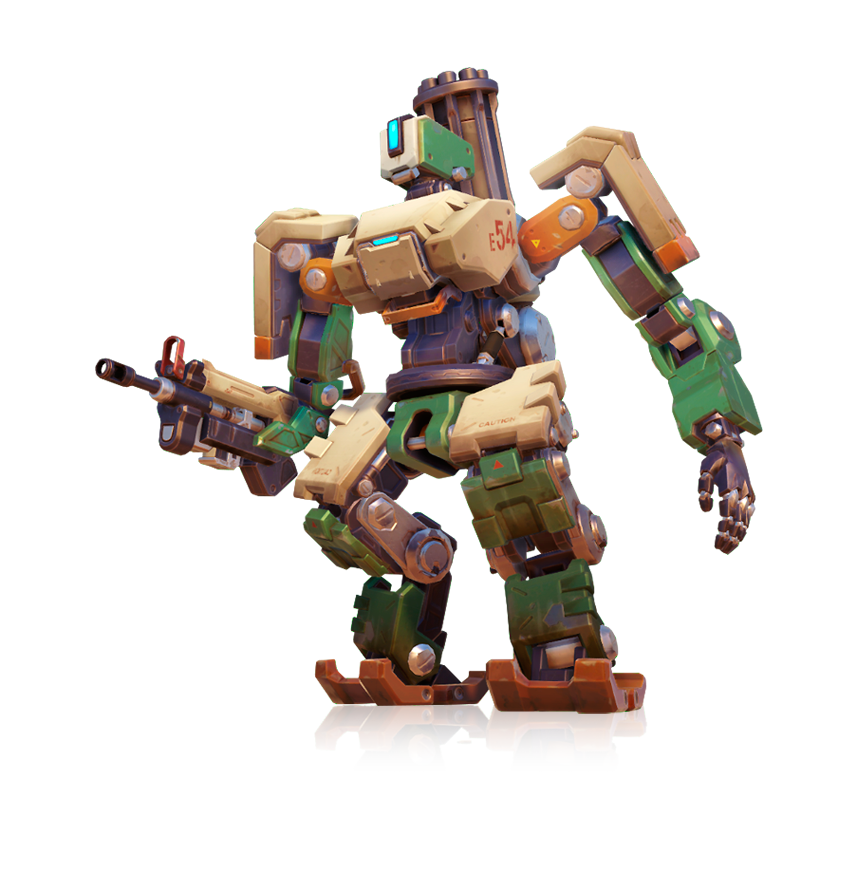 One unique Bastion unit, severely damaged in the final battles of the war, was left forgotten for over a decade. It lay dormant, exposed to the elements and rusting while nature slowly reclaimed it. Overgrown with vines and roots and nested upon by small animals, the robot sat inert, seemingly unaware of the passing of time. That was until one fateful day, when it unexpectedly reactivated. With its combat programming all but lost, it instead displayed an intense curiosity about the natural world and its inhabitants. This inquisitive Bastion unit set out to explore its surroundings and discover its purpose on a war-ravaged planet.

Though "Bastion" appears to be gentle — even harmless, at times — its core combat programming takes over when the unit senses danger, utilizing its entire arsenal to eliminate anything it perceives as a threat. This has led to instances of conflict with the few humans it has encountered, and has driven it to avoid populated areas in favor of the wild, uncharted regions of the world.

Configuration: Recon - Bastion’s default stance, Configuration: Recon allows him to run around the map while gaining access to a submachine gun. It fires in steady bursts and while it’s certainly not as rapid as other weapons (such as Soldier 76’s machine gun) it still deals good damage. Used as suppressing fire when moving, or poking at the enemy from afar when travelling forward with your team, it’s more than capable of cutting down low health Heroes such as Lucio or Mei.

Configuration: Sentry - Bastion’s stronger form, Configuration: Sentry allows him to transform into a static sentry turret. Equipping a gatling cannon that fires at incredibly fast speeds dealing high damage. Although Bastion cannot move when transformed into a sentry, the tradeoff is that his damage not only increase significantly but so does his rate of fire and ability to hold a point. A Bastion that’s well positioned is not only difficult to kill, but if being healed can quite comfortably survive against an oncoming enemy team. Just be sure to regularly heal yourself if necessary.

Self-Repair - Bastion can repair himself at any point, replenishing his health. Returning 25% of his health per second, it provides him with an amazing amount of sustain and allows him to be somewhat self-sufficient. The caveat to the self-repair is the fact that when in use, Bastion cannot move or undertake any other action. This leaves him particularly vulnerable and if possible, you should always ensure you heal when not under fire.

Tip - Self-Repair cannot keep you alive against constant ranged damage and it prevents you doing anything else while healing. Use it only when you have spare time.

Configuration: Tank - Providing Bastion with an incredibly strong Ultimate ability, Configuration: Tank, as you might expect, turns Bastion into a small, mobile tank. Lasting for 8 seconds and allowing him to deal enormous damage it’s an Ultimate that can quite quickly wipe an entire team. Dealing 205 damage per shot and with the ability to fire one shot per second (actually slightly under) it’s more than possible to kill even the highest health Heroes in a small amount of time. Interestingly and while in tank form, Bastion can still jump and his shells have a surprisingly long range that fire in a slight arc. This makes him especially slippery if you bunny hop while firing.

When it comes to strategy, Bastion really needs playing in two ways: static and mobile. Playing as just one or the other - or over playing as one - is doing him and your team a huge disservice. Finding a location, switching to Configuration: Sentry and remaining there for the duration of a match is not how he should be played. While you might get some kills doing just that, you’ll be easily killed (repeatedly) and you won’t be maximising your effectiveness. In addition, constantly remaining in Recon can leave you surprisingly vulnerable. Other Assault Heroes hit harder and have much greater mobility meaning Tracer, Reaper and even McCree - to some extent - will quickly cut you down. Knowing when to go Recon or when to setup Sentry is fundamental and is often based on risk versus reward.

If your team is advancing, you’ll have to go Recon but if you encounter the enemy, you’ll need to position yourself quickly so that you can switch to Sentry and gun them down. Unfortunately and as part of Bastions risk versus reward playstyle, you’re at times very vulnerable in Configuration: Sentry. Not only do you have a weak spot on your back, but the fact you’re immobile means that once the enemy knows where you are, it’s relatively easy to fire at you from outside of your range. Pharah, Widowmaker even Mei are more than capable of attacking and quickly killing you if they know your location.

Tip - Although Bastion excels on defence, he can be just as useful on offence when running alongside his team, especially on Payload maps

With that in mind, movement - and regularly establishing yourself somewhere new - is key. Once you’ve killed some players in Configuration: Sentry, switch locations. If they see you while in Recon, buy yourself time and reposition again. If necessary, stay out of Configuration: Sentry until the enemy is unaware of where you’ll be and then set yourself up.

Another important part of Bastion’s play is who you pair with. Although you can withstand some light punishment when in Sentry, you won’t last for long under constant pressure. With that in mind, pairing with a variety of Heroes that can bolster you is an important part of his play. Whether it’s Torbjorn to obtain his armor buff, Symmetra for her shielding or even Mercy so that she can babysit you. Even Reinhardt works incredibly well as you can still shoot through his Barrier while mitigating all incoming damage.

Finally, when the opportunity arises to use Configuration: Tank, it’s best to do it when you know a large group of enemies are near. Its damage and attack speed are so high that it’s more than possible to wipe the entire team. Be warned however, Bastion makes it very clear with a very audible “beep” that he’s used it, providing players who were listening with plenty of warning to run away.

Heroes listed here are particularly challenging for Bastion. While those listed can still be killed, they pose a particularly difficult challenge for him so be sure to take extra care.

This list of tips and tricks are just a handful of things we think will help your Bastion play. We'll continue to add to the list as required and if you have any tips you'd like to share, let us know in the comments below and we'll place them here.

This could be you!

The New and Improved Bastion

1. Remember that you're strongest on defence simply because enemies will then come to you, but you're still viable when attacking on certain maps.

2. Always try to use Configuration: Sentry in locations that limit the enemy's line of sight. Setting up in an open space where you can be attacked from all sides is a very bad idea.

3. If you've killed several players from one location it's a good idea to move locations. Keep the enemy unaware of where you are.

4. Your Self-Repair heals for a lot but it can't keep you alive against continuous damage. Use it behind cover or between fighting.

5. Bastion is particularly effective against Winston and Reinhardt because his rate of fire can obliterate their Barrier. Although Winston can dive on you, he'll be vulnerable and out of position.

6. If the enemy team has Pharah be sure to choose locations where her line of sight is limited. Ensuring she has to come indoors or choosing a balcony where you can only take damage from one side is best.

7. If your team has Reinhardt or Mercy, be sure to talk to them in chat asking for support when defending. It makes a huge difference to your potential.

8. When your Ultimate ability is ready, try to use it when you know there are multiple enemies near. With well aimed shots you can quite comfortably wipe a team.

9. Always ask Torbjorn or Symmetra for armor/shielding. It works when in Configuration: Sentry and will make it even harder for the enemy team to kill you.

10. Just because you're defending in Configuration: Sentry doesn't mean you should repeatedly die trying to defend. Don't be afraid to pack-up and leave if you're under too much fire without support.

11. You can transform into Sentry mode during a jump.

12. You can heal while moving.

13. Don't be a one-trick pony.  Bastion has his place in the game, but he isn't viable on every map or in every situation.  Switch if you are getting owned.