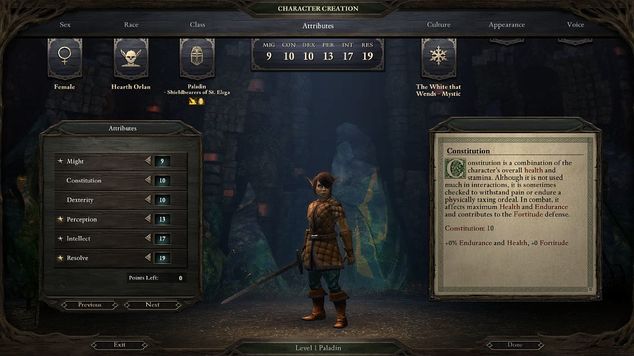 The depth of the character creation process in Pillars of Eternity is so deep, that I would probably have to take several hours of your life to delve into every choice, removing any and all fun from a game that is designed to be replayed multiple times to figure out what is and isn't the best class to play. Additionally, balance changes with each patch will prevent there from ever being one class / skill combo to rule them all.

Instead, we're going to discuss the basics, enough to where if you're not an RPG fan then you will at least be able to understand a bit more of the process. Every choice you make has a huge impact on the dialog in the game. The "watcher" or the PC isn't specifically the most powerful character in your team - you'll get to add a variety of other NPCs including companions, mercenaries, and even go through the process to make some characters to add to your party of your own.

While the PC is always with you, never worry too much about making bad choices. You can either recreate the game and reroll or utilize console commands to respec with IE Mod (use FindCharacter then ChangeClass). It's important to note that MOST of these changes are going to affect dialog and most of that dialog is just alternative choices (like I'm a mercenary! vs I'm a merchant!).

When choosing your race and gender, these are not fluff components of the game. Well gender is going to affect dialog and NPC reactions to a small degree, but your race will provide you with an active bonus.

The bonuses are directly listed on the character creation page. To decipher any attributes, check out my attribute / stat guide.

As for the best race, they all give a net gain of two attributes. Your sub race will give you your passive bonus. These will usually be once per encounter abilities that restore stamina or grant bonus stats.

There are 11 total classes. Here is a quick rundown of each one's specific default role, each class can be sped'd into some interesting alternative roles though:

Every class can play a variety of roles... thanks to attributes.

Each attribute affects your defense and a variety of other statistics. You shouldn't worry too much about straying outside of the recommended section, but, putting your points into the recommended stats isn't a bad idea. It'll take a bit to understand how you'll want to spec each character, but the game was designed with the intent of allow you to specialize however you choose. A Wizard with a lot of mechanics isn't specifically weakened, just... different and different spells will radiate to you. The recommended stats though are probably always the best way to go when starting out.

You can return to the attribute screen after selecting your culture and background to few the final stat disposition.

Well I hope that should demystify the character creation process a bit for you and help you not worry too much about making the wrong choice.