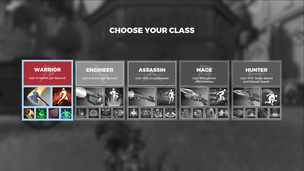 Realm Royale: Warrior Build Guide
Not sure what the Warrior does, or what build is best? This guide should help you out.
Guide
Realm Royale 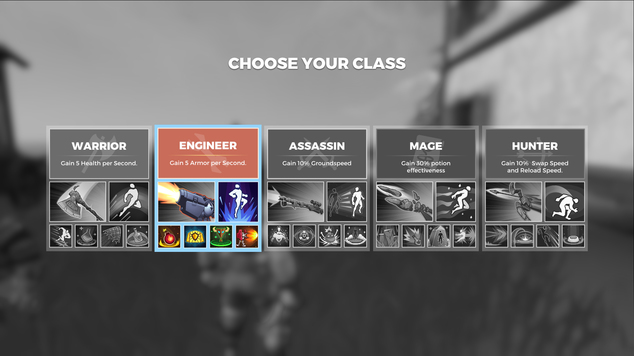 Realm Royale: Engineer Build Guide
Not sure what the Engineer does, or what build is best? This guide should help you out.

I would argue that the Engineer is probably the weakest class in Realm Royale. While he has reasonable sustain thanks to his armor passive, the vast majority of his abilities are static with short durations. Early game this proves fairly good, but late game most players are equipped to wait out his abilities, or ignore them entirely. Neither his Force Field or Turret last long enough, or deal enough damage, meaning he has to almost exclusively rely on his weapons alone. That said, if you can snowball early game and get some good gear, you'll be in a solid position to do well.

Warrior gain 5 armor per second as their passive. While it doesn’t sound a great deal, it ensures that early game - once you've got your first piece of armor  - that you can sustain yourself in fire-fights without having to instantly leap for a health potion.

The Engineer is a passive, area denial class that excels at holding a specific area for a short period of time. I've found he's better in 2's than solo queue, but can still do well if he has armor early, and some upgraded abilities under his belt. That said, if you can try to always fight in a confined space where line of sight is limited, and you can squeeze the most out of your static abilities.

With the exception of gaining access to the odd balcony or two, Thrust is a liability. It fires you straight into the air, at not too greater speed, leaving you a sitting duck and easy target for anyone on the ground. In certain locations Thrust can prove valuable, but its impact is limited compared to other classes.

Lasting only a few seconds, Barricade has limited value. Most players simply wait for it to disappear, at which point they'll simply attack you and your cooldown will be lengthy. Early game it's average, mid to late near useless.

I adore Deply Turret simply because if you fight around it, it offers consistent damage against your target. Its tracking isn't perfect, but will often bring down enemies that are low health, or at the very least soften up their armor. If you bag a Legendary Turret, you're in for a good time.

Without doubt his second best ability, Fire Bomb deals solid AOE damage that will hurt anyone who stands in it (including yourself). It's great for clearing a room, and particularly powerful if you can grab an Epic or Legendary variant. Just be careful not to cast it on yourself.

Though it heals for a high amount fairly quickly, if your armor is down it's likely you're toast anyway if someone rushes you. For the time it takes to the Healing Totem to bring your health up, you could have guzzled a potion. Early game grab one, mid to late make sure you drop it for offensive options.

My personal recommendation, if you’re pursuing an aggressive build, is to grab Thrust, Deply Turret and Fire Bomb. Ideally, you also need your class weapon as early as possible. These abilities offer area denial, splash damage, good vertical movement and excellent damage. Just be sure to bombard enemies when using Thrust, before following up with Fire Bomb when you land. Just make sure you don't hit yourself with your area of effect!

Realm Royale: Warrior Build Guide
Not sure what the Warrior does, or what build is best? This guide should help you out.