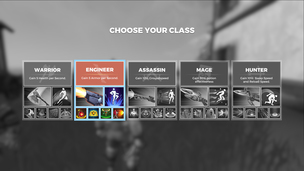 Realm Royale: Engineer Build Guide
Not sure what the Engineer does, or what build is best? This guide should help you out.
Guide
Realm Royale 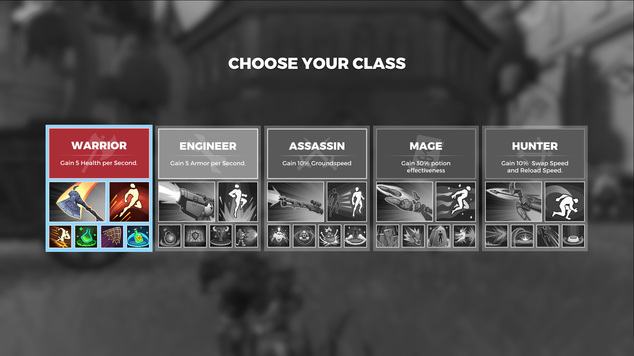 Realm Royale: Warrior Build Guide
Not sure what the Warrior does, or what build is best? This guide should help you out.

The Warrior is arguably one of the strongest classes in Realm Royale. Gaining passive health regeneration by default, and a kit that offers mobility and defensive tools, he can be hard to pin down. Combine this with his class-based weapon - a powerful Throwing Axe - and there’s little wonder most people reach for the Warrior. That said, a skilled Assassin can still get the jump on him, while a Hunter can keep him pinned.

Warrior gain 5 health per second as their passive. While it doesn’t sound a great deal, it ensures that early game - before you have much armor - that you can sustain yourself in fire-fights without having to instantly leap for a potion.

As you might expect, the Warrior is an in-your-face class that excels at playing aggressively. All of his abilities can be used on the move, and encourage you to remain mobile. Not only that, but abilities such as Shielding Potion can also be used on allies when you’re in a duo queue, ensuring you can still bring utility even when not directly near your teammate.

I have to admit that for early game, Heroic Leap proves invaluable. It can get you out of just about any bad situation, and ensures you can leap far enough away to mount up and escape. Feel free to drop this late game, as the opportunities for using the distance travelled become limited.

In confined spaces, Charge is amazing. When it’s late game, using it to engage or deal damage to someone in a house can prove particularly deadly. Just be aware of the fact you won’t travel as far with Charge as you do Heroic Leap. Use it to escape by all means, but ensure it’s ready for when you need to fight.

When solo queue, to gain value from Flask of Healing you need to throw it at your feet. The healing over time also isn’t great, and most weapons will burst you down far quicker than it can heal. Honestly, besides early game it’s one to avoid as both Net Shot and Shielding Potion are superior.

If you land Net Shot the moment you Charge, enemy players are severely restricted on how much they can move. It won't gaurentee a kill, but it makes landing attacks - especially your Throwing Axe - a damn sight easier.

Acting similarly to Flask of Healing, Shielding Potion needs to be thrown at your feet to work on yourself, or directly an allies feet to be cast on them. It doesn't mitigate a huge amount of damage, but will save your life and boost your overall mitigation. If you're full armor, opening a fight with Shielding Potion ensures you'll last much longer than your opponent.

My personal recommendation, if you’re pursuing an aggressive build, is to grab Charge, Shielding Potion, and Net Shot.

Not only do these abilities provide mitigation and damage, but also mobility. As long as you bag yourself a Throwing Axe as soon as possible, you can deal high damage very early game. A Charge > Throwing Axe combo at melee range is more than enough to remove an opponents armor almost instantly.

Realm Royale: Engineer Build Guide
Not sure what the Engineer does, or what build is best? This guide should help you out.