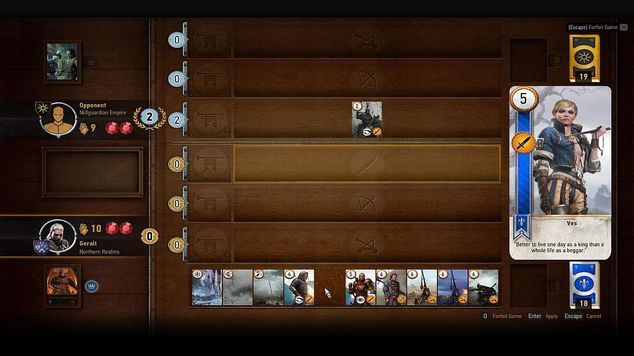 Witcher III Gwent Guide
Find out how to play cards in Witcher III: Wild Hunt. Gwent can be confusing, but we seek to remove the fog of

Gwent is rather hard to wrap your head around first, but it's just as addictive as any other random card game built into another game. It's like playing a game within a game, except with cards and it's so rather confusing. There is a quick in-game tutorial I suggest you take, but that's probably going to make matters even more confusing. So let's get started with the basics:

Gwent - When, Where, How

You can play Gwent almost anywhere, randomly out in the world, in taverns, with random nobleman who have nothing to say but grunts. There are tournaments and other random events happening in the world and sometimes you will never get the chance to play someone again if you keep moving forward with your quests.

Gwent is played with 10 cards and up to four rounds. The highest points on the field in a round is the winner when a player passes when their opponent is stronger than them (or when two players pass in a row if a Nilfgaard deck is in play). It gets a bit confusing from here, but let's try to make it simple.

Gwent - How to Play

To play Gwent, you first start in the deck builder. We'll go off into this in a bit, but you choose one of four deck types, and the cards contained within. Then you'll start off drawing 10 cards. You get a mulligan on two of them and can repick those two cards specifically. You'll have 10 cards to play through up to four rounds, so winning with as few cards used as possible is the most important. There is no cost to playing a card.

You place cards either in the infantry, ranged, or siege areas of the field until either you or your opponent passes with the other one having a stranger army value. Then the board is cleared (Monster deck types keep a card on the deck) and you start again until two rounds are won. You can only play one card per turn.

Each card has a strength total. Once played, it adds to your army's strength. This number can be manipulated with special abilities, leader card perks, other cards special abilities, and weather cards. So a card with say 4 strength could easily end to 10 if enough various cards are on the field. 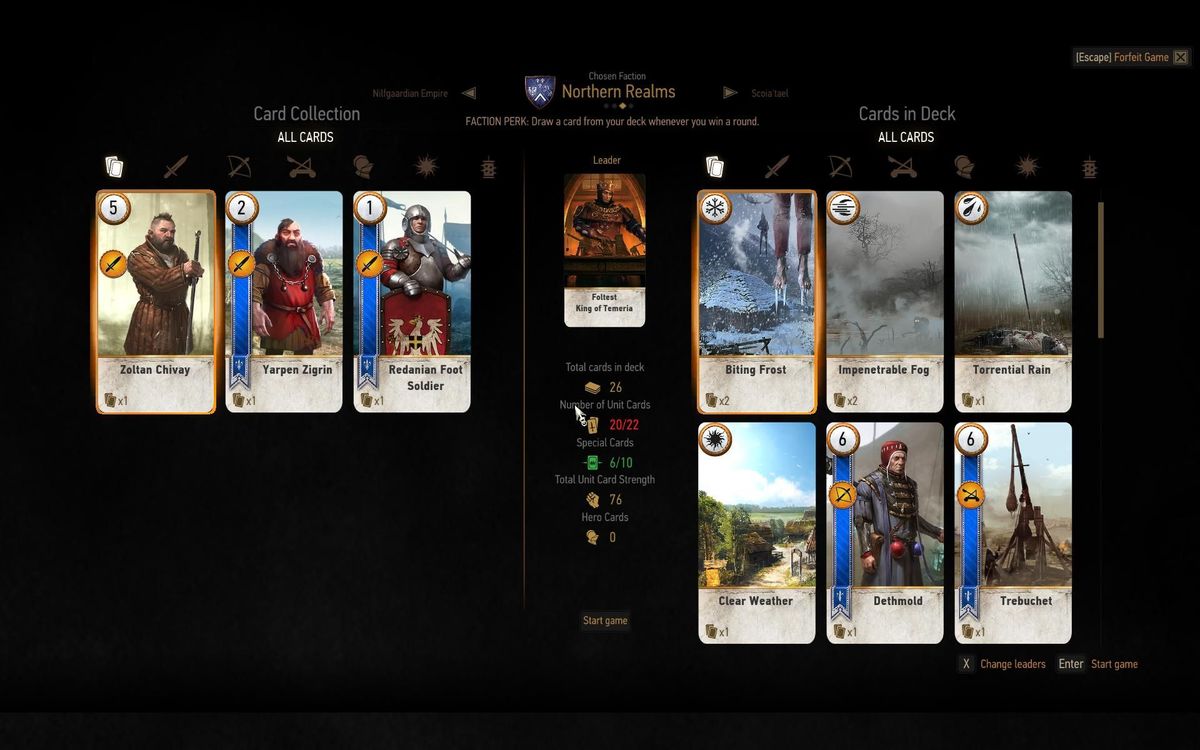 There are four deck types, each one contains specific deck only unit cards and obviously have their own leader cards. Here are the types:

Leader cards are also chosen per deck. Once per match you can utilize their special ability, such as clearing weather or adding damage. You start with a few leader cards and can find more throughout the world.

When building your deck, you must understand some very important tips: the smaller the deck the better, because you only get 10 cards (plus 1 extra draw if you're Northern Realms). So you'll want to focus on having the cards you want the most in your deck. Each unit card has a strength number, this adds to your teams strength when played on the field.

Unit cards can have special abilities that buff other cards. Take note of this when building your deck. You want as many complimentary cards as possible.

There are three types of weather: Snow affects close combat/infantry, Fog affects ranged combat, and Snow affects siege. You start the game with a clear weather special card and your opponents can play them as well.

Strong hero cards also exist and are immune to special cards. They act the same as a unit card. Hero cards only work for specific deck types while neutral cards work for either.

You can obtain cards by winning matches, through quests, and by purchasing them from vendors such as innkeepers. It's important to have as many card varieties as possible as early as possible to be a successful Gwent player.

That's about it for understanding the game. To run down the game again, a player wins a round when the opponent has a lower combat score and passes, or, if two players pass and one of them is a Nilfgaard.