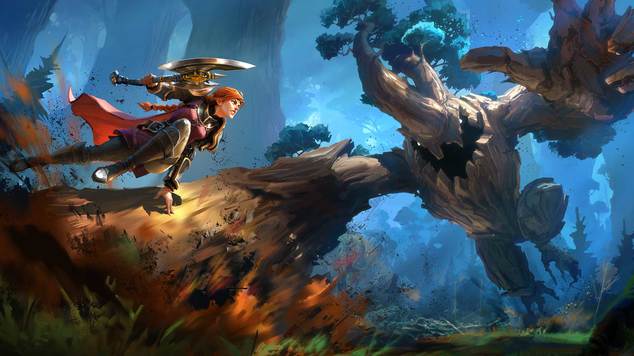 Albion Online launched to a lot of excitement, quickly dropped off (largely due to incomplete systems, content being missing, it being fairly tough on the PvP front) as well as some bad PR when it came to staff layoffs before it even launched. Despite that, the team has knuckled down, switched to a play for free model, delivered cross-platform play, and seems to be doing very well.

Its latest update, Queen, looks huge and - according to most of the community - is the real deal. Arriving on January 20, it brings huge updates and improvements that look set to improve the game even further.

Queen is coming! This update brings a complete rework of the Outlands continent along with fully revamped open-world territory control. An all-new Hideout system lets guilds place their own bases in the open world, while the Crystal League allows players of all levels to participate in 5v5 battles. This update also introduces a new faction to the game: the Avalonians. Found in Elite Randomized Dungeons, these foes offer incredible rewards to those who can best them. Queen also brings a huge number of quality-of-life improvements to streamline and strengthen numerous aspects of the game.

The full blog post, which you can read here, or here for a full breakdown. Overall, I'm pretty excited about it, and I think I'm going to give it a shot.

The Queen update brings a complete rework of the Outlands continent. The new continent has lower-tier zones at the outer edge, with tiers and resource values increasing toward the center, allowing guilds of different strengths to compete at their own levels. Territories within a region now all share the same prefix and portal zones are clearly named, allowing for easier searching and navigation.

In conjunction with numerous other new game systems such as Hideouts, Open-World Territory Battles, and three new Outlands towns, guilds can now choose to live entirely in the Outlands.

Hideouts allow guilds to build their own underground bases in open-world black zones. These powerful, autonomous homes include a guild bank and building spaces, and can eventually be upgraded to include a Marketplace, Artifact Forge, and even a Guild Hall.

As Hideouts require resource upkeep and need to be protected during and after their construction, choosing where to place a Hideout also requires strategic planning of transport and logistics, bringing an exciting new dimension to land ownership in Albion.

Territories are now claimed via open-world battles, opening up new opportunities for large-scale combat. In addition to allowing all members of a guild to contribute meaningfully to territory control, territories can also be challenged by multiple guilds, leading to more complexity and strategy in territory ownership. This new system is complemented by the zerg debuff introduced with the Standalone Event Season, which ensures that armies cannot triumph on numbers alone, and a new Smart Cluster Queue, which acts as a dynamic matchmaking system for overcrowded clusters, keeping the numbers and strengths of opposing armies balanced.

The Avalonians are an ancient faction that lived during the time of the great war between Merlyn and Morgana. Isolated for centuries, they have emerged to reclaim their lands. These elite enemies are the most powerful foes thus far in the world of Albion, and can be challenged in Elite Randomized Dungeons, which will spawn in all T6-T8 Outlands zones and offer a high-level challenge to groups of 15-20 players.

In addition to the highest-value loot in the game, Elite Dungeons contain final shrines that offer a week-long buff to mob fame for those with enough tenacity and skill to reach them.

Crystal Realm Battles are now accessed via the Crystal League, which offers huge rewards of Silver, Fame, and Season Points that increase with each successive bracket. The Crystal League lets players fight either with their fellow guild members or in a team of their own creation, giving high-level PvP players increased freedom to choose their own path. Additionally, when the Crystal League is accessed via a guild's territory, victory brings a tower level upgrade that offers lucrative gathering, defense, and Season Point bonuses to the winning guild.

In addition to the Avalonian mount, tools, and foods already introduced with the Standalone Event Season, players can now obtain artifacts and shards from defeated Avalonian mobs. These can be crafted into three all-new sets of Avalonian Artifact Armor. These armors range from T4 to T8 in plate, leather, and cloth with power equivalent to a fourth artifact level. Each piece of armor brings an incredible new spell, from a shield that reflects incoming damage as lethal projectiles to a hovering ability that renders the caster immune to being rooted.

The Queen update brings a huge new Wardrobe Skin system, allowing players to use costume items in the open world without losing them or giving up combat readiness. In addition to the numerous items already in the game that have been converted to skins, a variety of new costume sets are available. As with Mount Skins, Wardrobe Skins can be purchased on the Marketplace or unlocked in the Appearance section of the player menu.

This update brings numerous additional features and improvements to the game, including: