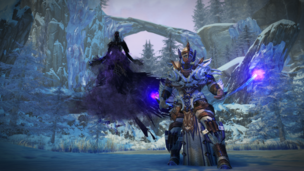 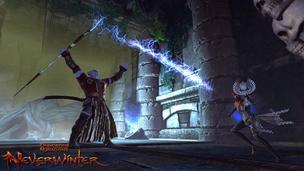 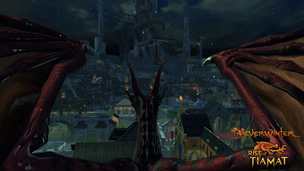 The final closed beta weekend event for Neverwinter has given beta
testers - and Cryptic developers - lots to think about. To this end, the
development team took to the social media sites, and fielded fan questions
in an "Ask
Me Anything" thread on Reddit.

The thread was started by Lead Combat Designer Kevin Stocker, who
encouraged redditors to "Ask me anything about combat and the development
of combat in Cryptic Studios' upcoming game Neverwinter!" The conversation
quickly spread beyond combat, and other Cryptic devs joined in on the
discussion.

A lot of questions went unanswered by the developers, but here is a
summary of what they did have to say.

A lot of bugs were discovered by the beta testers and these are being
handled now. One example is the Control Wizard's Conduit of Ice skill,
which used a red ground "splash" to indicate its area of effect and was
impossible to tell from enemy AOEs.

The Devoted Cleric was bugged during Beta Weekend 3. An adjustment to the
class's self-heals resulted in vastly overscaled threat generation from
healing. The self-heal twek came as a result from previous beta weekend,
where too-powerful self-heals were giving the Devoted Cleric a number of
distinct and unbalancing advantages over other classes. According to
developer Grant Allen ("Cryptic_LordAzrael") :

Regarding Cleric self heals, they will likely remain fairly minor for
the Cleric. This is to help balance the fact that Clerics don't need to
use as many health potions as other classes. Before the self heal
reduction, Clerics would pretty much always have more gold than all
other classes.

It was also creating situations where Clerics would just self heal tank
through encounters.

So as unfortunate as the reduction is, it does make you a more
concerned with taking damage in combat, which hopefully leads to a more
satisfying experience at the end of the day.

The
cleric proved to be a figure of distinct controversy. A number of players
have complained about the class's limited healing abilities in dungeons
and in PvP. Grant Allen defended the Devoted Cleric's current role in the
game:

Overall pretty happy with the spot the Cleric is in. In D&D Clerics
are more than just heal bots, and I think we've addressed that pretty
well.

Given the nature of the game, we didn't want them healing so well that
other players would not bother avoiding damage on their own. This also
meant that we could up their damage and let players enjoy a more
aggressive healer type.

So, in other words, clerics aren't meant to be heal-bots or heal-tanks.
They are supposed to be ass-kickers with some healing ability... but not
too much. For some players who are used to the standard "MMO Trinity" of
Tank-Damage-Heals, this can be a bit confusing. One user addressed this
idea directly, and was answered by developer "cryptic_crucial":

The trinity plays a different role in Neverwinter. This is something
that has changed a lot over development, and in the end it just wasn't
as fun to have a 'dedicated healer.' Being a game based around action
combat, having a class that focuses entirely on healing or entirely on
aggro management wasn't as fun. The Guardian Fighter still controls the
battle and takes a bunch of damage for his team, it is just done in a
different way than in more traditional MMOs.

So while the trinity is not wholly abandoned, neither is it the
rigidly-defined set of criteria one might find in other games. This can be
seen fairly early on in the game, with random queues for dungeon instances
like the Cloak Tower, which can be run with non-traditional groups and
still have a reasonable chance of success. Having a main tank and main
healer helps, but in a pinch a group can often make do without one.

For me, this makes the game feel more D&D-like. I've played in
campaigns with no regular healers. Usually, the DM has to compensate for
this - make healing potions more readily available, mix in strategy to
help the players avoid taking damage, etc. But sometimes that's how the
game plays out. Sometimes the group wants to roll an all-Rogue or
all-Wizard party, and the game allows for it.

However, that doesn't mean that high-level content should be run with a
bizarro unbalanced group. Even the content designers don't stray too far
from the standard MMO group when testing their own material. According to
"cryptic_crucial":

Our in house playtests of the end game content are always with 1 of
each class. There is a pretty big void when you double up, but it is
conceivable that someone finds a strategy that doesn't include a tank or
healer.

He goes on to say in a later post that they don't use any store-bought
items when testing dungeon content, either. This has a couple of different
implications:

This is a legitimate concern for many, and has sparked some debate on the
official Neverwinter forums and elsewhere, but the dev team had little
else to say on the matter. It's clear that the Neverwinter community is
excited for the game's future and wants to know more about it, but the
tech guys can really only reveal so much. They can talk about technical
aspects behind combat animations, spell effects and enemy AI, but they
can't reveal future launch plans. Which is unfortunate, because that's a
question that comes up regularly, any time a Cryptic official makes any
kind of annoucement or forum post.

The Ask Me Anything session is long over, but you can read the rest of
the session Here.
How was your beta experience in general? Let us know in our comments!