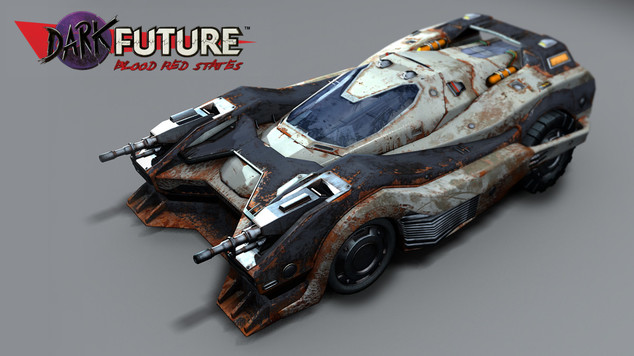 Mad Max fever is running wild this week, folks. Just yesterday we covered the announcement of Crossout, a new post-apocalyptic vehicle combat MMO that is currently in development. Before we could let the fond memories it stirred up of Auto Assault fully sink in, today we learned that the Games Workshop classic Dark Future will be making a triumphant return in the form of Dark Future: Blood Red States, a new game slated to release in winter of 2015 from Auroch Digital.

Dark Future: Blood Red States is being described as a simultaneous turn-based strategy game that will be coming “to a digital platform near you…” I’m currently eyeballing the holographic lift here in my underground laboratory, but something tells me that’s not the kind of digital platform they’re referring to.

The official announcement helps shed some light on what Dark Future is all about for those unfamiliar with the original board game from the late 1980’s or series of books that followed:

It's an alternative, bleak, hollowed out America, in 2023. The major cities are either corporate controlled high-tech gated communities (Patrolled Zones, or PZs) for those who can pay, or lawless shanty towns for those who can't (NoGos). Between these is 'The Big Empty', the polluted, wasted Red States of America where vicious gangs hunt and fight. The atrophied state has all but given up trying to impose law and order here and instead relies on a new breed of bounty hunter come highway warrior to keep the roads open, the Sanctioned Operative.

Into this fractured new world the player must make their fortune. The player runs a Sanctioned Ops agency; taking on missions for bounty outside the PZs. As well as the tactical action on the road, the player must also manage both the vehicles and drivers – from upgrades to the front-mounted HMGs to booking a driver into the clinic for a new set of bionic eyes.

I’m scheduled to visit my optometrist next month, so I’ll have to ask about picking up a set of those bionic eyes. Speaking of eyes, be sure to turn yours towards the awesome trailer for Dark Future: Blood Red States below, or you can also learn more about the game by visiting the official website.

To read the latest guides, news, and features you can visit our Dark Future: Blood Red States Game Page.