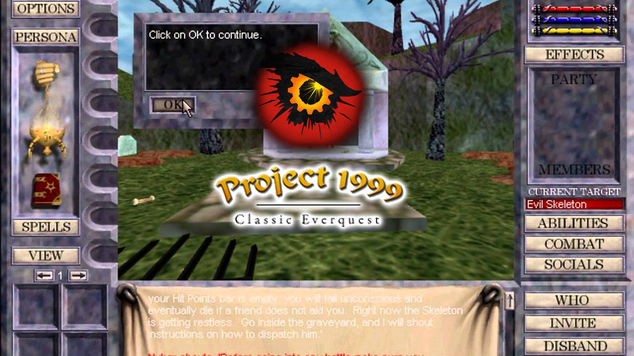 Daybreak and Project 1999 Come to Terms
It seemed like it would never happen, but finally Daybreak - perhaps in a new company spirit - have finally agr

With Daybreak Games (formerly SOE) finally unveiling its new logo as the company moves forward into a new era of development, the company also just announced another bit of news that might give players more insight into the new spirit of this company.

Daybreak posted an announcement on their forums (immediately following P99's initial post) that they are finally officially recognizing Project 1999 as a not-for-profit fan-created classic emulation of their flagship MMORPG. The project itself has existed for years, but SOE (now Daybreak) has never officially recognized the game, and thus offered no real assistance or support to the team of fans that has been keeping it alive this whole time.

While this news isn't monumental, it is certainly a step in the right direction, as Daybreak has its work cut out in restoring the faith of not just future customers, but its long time fans as well. The whole acquisition and the layoff of so many beloved community managers and public faces as been tough on the existing fans of the studio, and has brought into question what exactly the public can expect from Daybreak games in the near (and distant) future.

Creating a working relationship with Project 1999 ensures that fans of the both the live game and the classic emulation won't be indirectly disturbing each other's unique flavors of an EverQuest experience. That bodes well for all parties involved and is a great show of goodwill by Daybreak towards their passionate fanbase and those who love their work.

Next up: Star Wars Galaxies!