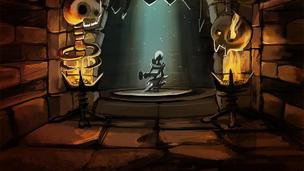 It seems to be a popular week for open betas. Masthead Studios has announced that GUNS and ROBOTS made the jump this week, joining Path of Exile, DUST 514 and SMITE.

GUNS and ROBOTS is a free online shooter with customizable robots...with guns. Players can engage in battles to climb the ranks while unlocking achievements and new equipment. If that sounds like your kind of game, head over to the GUNS and ROBOTS website to sign up. Open beta characters will not be wiped for launch.

SOFIA, BULGARIA-January 24, 2013- Masthead Studios, a leading independent game developer, today announced that GUNS and ROBOTS has successfully opened the door for everyone to play the game. Players can get instant access to the online shooter today!

Players of GUNS and ROBOTS can look forward to exciting fast-paced battles, wide variety of customizable parts and modules, different weapon enchantments and pure fun! The open beta will allow players to play and participate in the development process. The Open Beta allows us to understand what our community wants, what they want to see in the battle arenas and be in touch with our players said Atanas Atanasov, CEO of Masthead Studios. The feedback from the volunteers in the Closed beta has been crucial and helped us improve important aspects of the game, he added.

In the open beta phase of GUNS and ROBOTS, thousands of potential weapons will allow players to fine-tune their arsenal. Players will be able to pinpoint enemies with multiple weapons simultaneously. Weapon customization will be provided with sets divided according to durability, damage, energy consumption and ammo supply. Each player can make extraordinary weapon combinations that fit his game-play preferences!

The game server is now open. Robots, created in the open beta will not be deleted in the future. Closed beta participants are welcomed to sign up at the improved registration form at www.play-gar.com and download the client.

Sign up now and dominate the demolishing world of GUNS and ROBOTS !

About GUNS and ROBOTS

GUNS and ROBOTS is engaging free online shooter with inventive character design and an endless list of customization features. The game combines fun art with almost unlimited game play. The characters are able to move freely all over the maps, engage in battles, climb up the rankings and unlock various achievements. They will be able to choose their equipment from variety of weapons and over 150 different parts. The incredible battle mechanics combined with funny looking robots adds a whole new perspective to the genre.

Features of GUNS and ROBOTS:

For more information about GUNS and ROBOTS, please visit: http://www.play-gar.com/ or http://www.facebook.com/GUNSandROBOTS

Masthead Studios is an independent game development studio focusing on innovative and quality games bringing to its fans enjoyable entertainment experience. The company was founded in 2005 with focus on the MMORPG genre. The primary goal of the studio has grown into making high quality, original and fun games for various platforms.  The team consists of highly experienced and dedicated talents with fresh ideas. The headquarters of Masthead Studios are in the emerging technology hub of Sofia, Bulgaria. For more information please visit www.mastheadstudios.com