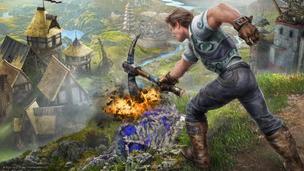 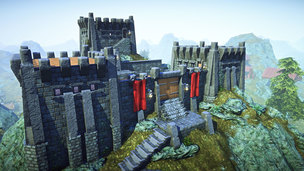 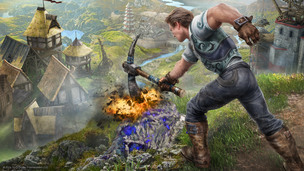 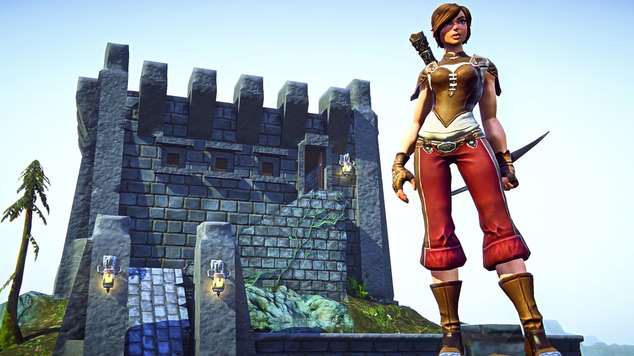 Today's update for Landmark is the one many of us have been waiting for. Whether or not PvP is your idea of gaming fun, if you're interested in EverQuest Next and Landmark, this update is the one for you. “Why, Vendolyn, you're a PvE Queen!” I hear you say. Yes, I do prefer PvE in my MMOs (with a few exceptions – I leveled in Warhammer exclusively through punching face), but even then, this is the very first experience we get for the combat system that will be available for EQNext, and that is no small thing. Right now combat is tied to equipping one of three weapons that can be crafted, so don't load up the game expecting to see what multiclassing is like, because that's not in yet.

What is in, however, is a player's ability to create player arenas. Right now there are three types of PvP matches: zone control, free-for-all deathmatch, and team deathmatch. When constructing arenas on your claims, you have options to set all of these up, from type, to points, to time limits. Currently, while PvP is the first iteration of combat for our two newest Norraths, it is only available in player arenas, so don't let PvP keep you from logging into the game, since it's not open world. Domino has carefully laid out all of the details and how you can go about setting up some really fun areas for players to battle in. 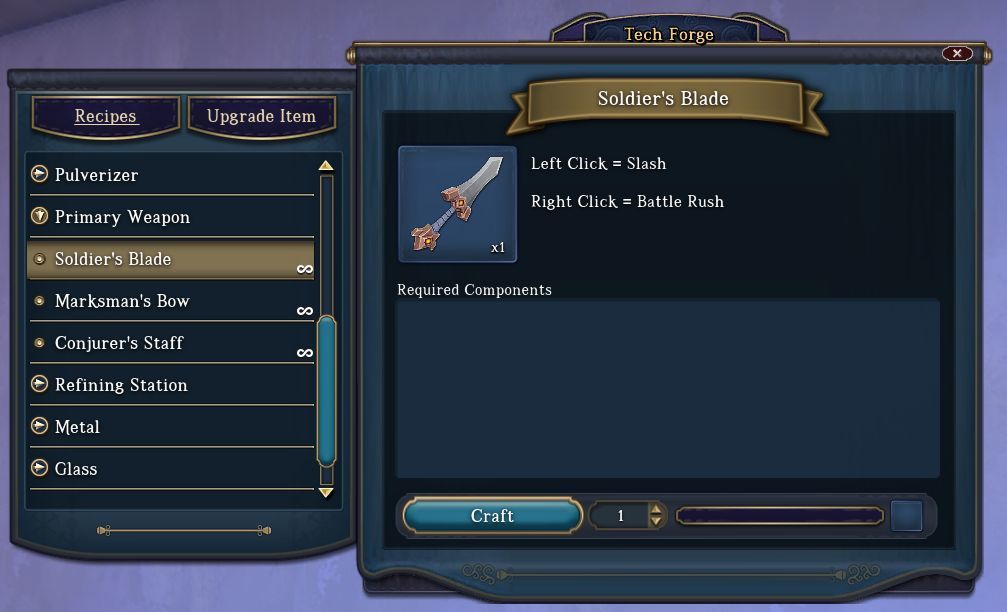 Currently, players can craft three different types of weapons at a forge, that will give them abilities to use in arenas. This is the first run of opening up combat to players, so expect this to go through a lot of changes before we get our hands on EQNext. For the weapons, players can craft a Conjurer's Staff with the abilities Energy Burst and Gravity Shock; a Marksman's Bow with the abilities Quick Shot and Sniper's Mark; and a Soldier's Blade with the abilities Slash and Battle Rush. From the screenshot Domino used in her post, it appears that each weapon will have an ability tied to the left and right mouse buttons. Also in her post, when a player is in combat, they'll have a HUD display pop up showing not only their armor (read: hit points), but also a targeting reticule that will change from white to red whenever you're mousing over a combative enemy. I will assume that once the reticle is red, then you can click your mouse with wild abandon.

Because PvP is tied solely to arenas at this point, players need to find arenas in game to join. SOE is also adding in the very first version of a queuing process here. After a player has set up their arena, other players will be able to find them and enter them. In order to join the fight, you'll need to queue for the match available on the claim. Once enough players are available (according to the perimeters set by the claim owner), the match begins and lasts until conditions are met, which are preset by the claim owner. While Zone Control matches depend on capture points, both Deathmatch varieties are dependent on kills. These matches can go until a certain number of points have been met or a time restriction has been met. 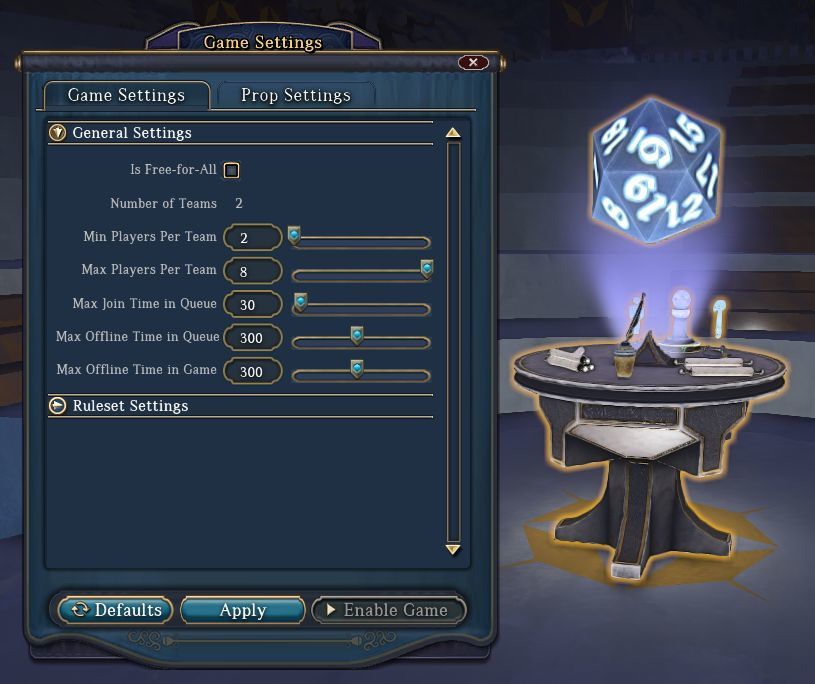 Also included with these new arenas are a whole slew of props to go with them. These props include everything from the designated capture point to landmines. Yes, landmines! You can place bombs in your arenas that will trigger a countdown once a player gets within a certain proximity, that will set off an area of effect damage blast once the countdown is finished, damaging anyone within its range. Speaking of damage, this also means that simple death and resurrection is in game. Not only can you die from players in PvP, but you will also take falling damage anywhere where you are not a claim owner or have building privileges for that claim. Death currently does not have a penalty. Players may resurrect other players with the F key.

This patch also has a large list of new Kerran-inspired props to craft. Since the props list is ever-growing, they are now spit into four categories to better help sort props: Decoration, Furniture, Lighsource, and interactive. Players may now increase attached claims to five total. Continued improvements have been made to performance. You can also create new “movers” in the Tinker's Workshop, which can allow you to move faster across your claims or even for you to use in your PvP arena builds, for a little extra player against player fun. 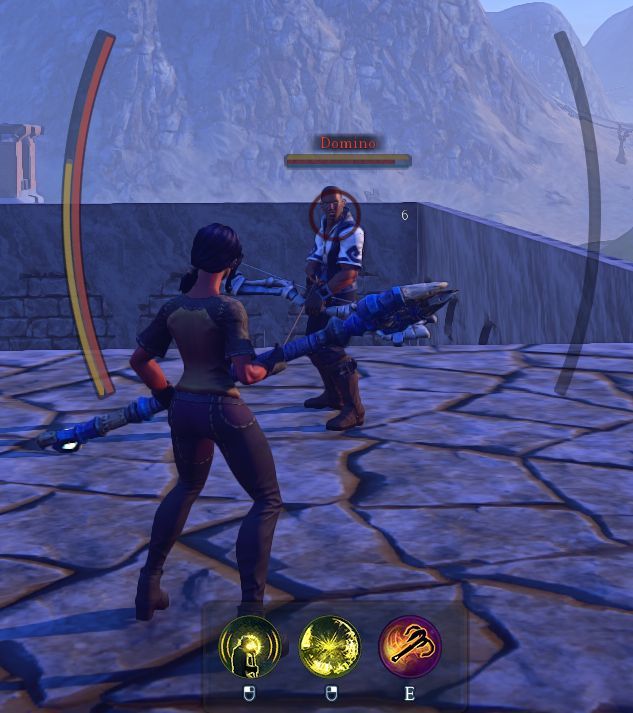 With all of these changes that go in today (4pm PT is when the patch begins), the game's Roadmap has also been updated. As we inch ever closer to open beta, the main focus here will be on bug fixes, performance optimization, and sorting out combat, to make the open beta experience as enjoyable as possible. Since Landmark is a free-to-play game, open beta is pretty much the game's soft launch. SOE has a short window to iron out as many kinks as possible to get the game ready for an influx of newcomers. After these kinks are sorted and sometime before open beta, expect to see PvE combat in the game, expanded combat, VoiP integration, merchants, and more. Later down the line, we'll get a ton of even more fun things, like the Ley Lines system, achievements, SOEmote and more.

Are you as excited as I am for this patch? Want a different perspective? Shayalyn also wrote about this patch over at EQ Hammer, so check out what she has to say! Let us know how PvP in Landmark is treating you in the comments below!