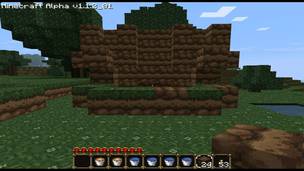 Majong Pitching LEGO Minecraft
<p>The popular Indy game <em>Minecraft</em> is making a run at getting its own line of LEGO-based toys.

This could end up causing an implosion of the space-awesome continuum. Minecraft developer Mojang may be well on its way to convincing the LEGO Corp. that it should have its own line of toys based on the popular Minecraft game. So yeah, the video game about building things with blocks could possibly be getting its own toy line thats used to build things with blocks. How awesome is that?

The idea spawned via a submission by Mojang to website LEGO Cuusoo, which lets fans vote on their favorite LEGO prototypes. Apparently the site has been having a hard time managing traffic since Mojangs Daniel Kaplan tweeted about it yesterday stating, We are working directly with LEGO to make this happen. Kaplan urged fans to vote once again on the LEGO Minecraft prototype, which has currently garnered more than 8,000 supporters.