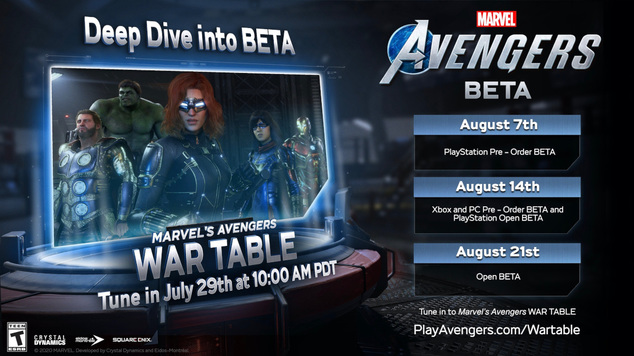 Square Enix has revealed the start times for the Avengers beta.

PlayStation 4 players who have pre-ordered on August 7 will get first entry into the beta.  A week later PS4 players a week later, on August 14. Pre-order beta access will begin for Xbox One and PC players on the 14th as well.    Full open beta for everyone will start on August 21.

Crystal Dynamics will use their War Stream to explain the beta.  The next War Stream is scheduled to take place on July 29.

According to Creative Director Shaun Escayg the beta will have some of everything, including campaign missions, co-op content, character progressions and exploration in both War Zone and Drop Zones.  It will give players a taste of the game, but only a small one.