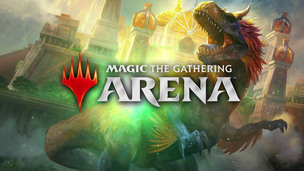 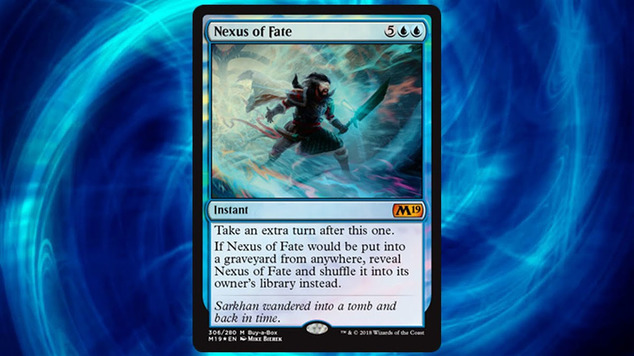 After much wailing and gnashing of teeth Nexus of Fate is now banned in Magic the Gathering Arena Standard formats.

The list of all banned and restricted cards, by format, is here.

Wizards of the Coast explains their process when it comes to banning cards.

First, is a card "too powerful"?

When it comes to determining the overall power level of a deck, there are a lot of data points we can take into consideration. We can look at the metagame and see whether it's stagnated due to a dominant strategy, or if there is diversity in the deck archetypes people are playing. We can also look a deck's win rate, and how other decks in the format fair when matched against it. And if either of those scenarios appears to show an issue, we try to identify which card(s) may be pushing the deck beyond format-healthy power levels.

Nexus of Fate doesn't really fit any of the power-based criteria for banning. While it made a bit of a splash leading up to Pro Tour 25th Anniversary and the reemergence of Turbo Fog as a Standard-legal deck archetype, it only appeared in six out of the 165 Standard decklists, none of which made it to the Top 4. Looking at recent Grands Prix, the last time Nexus of Fate made it to the Top 8 was in the hands of Eric Froehlich during GP Los Angeles back in August. With the release of Guilds of Ravnica, and the rotation of both Kaladesh and Amonkhet blocks, we saw the meta reshape itself, which is usually a good indicator of a healthy format. Nexus of Fate still had a place in a few control decks, but it was by no means dominating the format. Standard has continued to be a diverse play environment, supporting a number of archetypes and counter play between them.

Despite all of this, Nexus of Fate continued to be a hot topic of discussion, particularly when it came to MTG Arena. We've talked about it, we've seen our pro players talk about it, and we've seen our community talk about it. Since most of the conversation had very little to do with its overall power level, this brings us to the next question we try to address when we consider banning a card.

This is, admittedly, a rather subjective criterion and is one of the reasons why we've thought long and hard about how we wanted to address Nexus of Fate. This isn't the first time we've taken into consideration the disruption of normal play when it came to determining whether a card warranted a ban: the Eggs deck is probably the most prolific example of this, but we've also seen it play a factor in the more recent bannings of Aetherworks Marvel and Krark-Clan Ironworks. As anyone who's been looped by a Nexus of Fate can attest, the card can easily and significantly disrupt normal play.

The tricky thing with this situation is what makes Nexus of Fate frustrating—a combination of its design and how technology handles the ability to repeat actions. You typically don't run into the same situations in tabletop because our rules do allow for certain shortcuts. When looping a sequence in tabletop, if both players mutually understand what's going on, it's okay to fast forward until the loop is broken—either because the game is won, or the player looping has reached their desired board state. Worst case scenario, players in competitive play can also call over a Judge to keep a stalled game moving. The same cannot be said for digital environments where you must explicitly identify each game choice every time you wish to make it. There's no calling over the games rules engine to explain the situation so you can skip ahead, or to issue a ruling on whether the actions taken could be considered stalling or slow play (at least not yet!). Part of the challenge with these kinds of loops is that even if we manage to win the digital arms race to force a game concede when game states remain unchanged, they could still be disruptive to what we consider normal play. Using Nexus of Fate as an example, win conditions sometimes take a half hour or more to finish, with the majority or all of that time being non-interactive. This said, there are also cases where Nexus sees play and resolves games in a non-disruptive fashion, which is why banning it has been debated for so long.

In my opinion, the ban is an excellent decision.   Games with or against Nexus of Fate were not nearly as much fun as those in which it didn't get played.  MTGA should be fun, first and foremost.