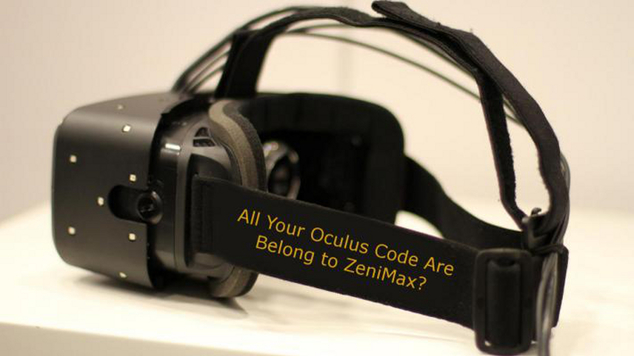 Facebook purchased Oculus VR back in March for a cool $2 billion. But now ZeniMax Media has set the startup company turned Facebook acquisition in its sights. Zenimax Media, the parent company of Bethesda Softworks and ZeniMax Online Studios, developer of the recently released MMORPG The Elder Scrolls Online, alleges that it owns key technology behind the development of the Oculus Rift headset.

Caught in the midst of the dispute is John Carmack, a developer and industry veteran known for his work on such games as Doom, Quake, and Castle Wolfenstein. Carmack now works for Oculus VR, but he previously worked with Oculus VR on the project while he was still under contract with ZeniMax. And that’s where this starts to get heated.

In a statement to Gamasutra last week, Zenimax claimed that it had sent a letter to Oculus concerning the allegations and knowledge of Oculus co-founder Palmer Luckey stating:

"ZeniMax confirms it recently sent formal notice of its legal rights to Oculus concerning its ownership of key technology used by Oculus to develop and market the Oculus Rift”, a Zenimax statement to Gamasutra read. “ZeniMax’s technology may not be licensed, transferred or sold without ZeniMax Media’s approval. ZeniMax’s intellectual property rights arise by reason of extensive VR research and development works done over a number of years by John Carmack while a ZeniMax employee, and others. ZeniMax provided necessary VR technology and other valuable assistance to Palmer Luckey and other Oculus employees in 2012 and 2013 to make the Oculus Rift a viable VR product, superior to other VR market offerings.

The proprietary technology and know-how Mr. Carmack developed when he was a ZeniMax employee, and used by Oculus, are owned by ZeniMax. Well before the Facebook transaction was announced, Mr. Luckey acknowledged in writing ZeniMax’s legal ownership of this intellectual property. It was further agreed that Mr. Luckey would not disclose this technology to third persons without approval. Oculus has used and exploited ZeniMax’s technology and intellectual property without authorization, compensation or credit to ZeniMax. ZeniMax and Oculus previously attempted to reach an agreement whereby ZeniMax would be compensated for its intellectual property through equity ownership in Oculus but were unable to reach a satisfactory resolution. ZeniMax believes it is necessary to address these matters now and will take the necessary action to protect its interests."

Carmack later took to Twitter to address the allegations himself.

No work I have ever done has been patented. Zenimax owns the code that I wrote, but they don't own VR.

Oculus uses zero lines of code that I wrote while under contract to Zenimax.

An Oculus VR representative responded to our inquiry for a comment about the situation earlier today and said this:

We are disappointed but not surprised by Zenimax’s actions and we will prove that all of its claims are false. In the meantime, we would like to clarify a few key points:

Hunker down folks. This one is probably going to get interesting.