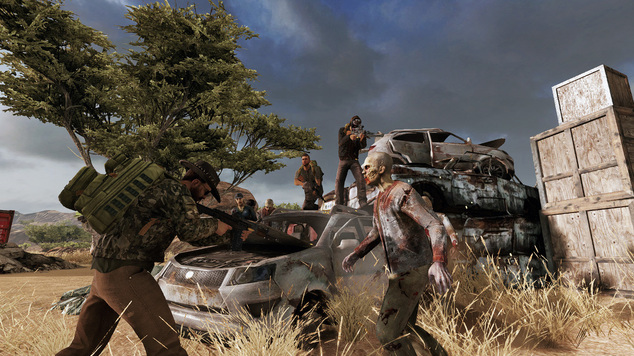 To put that number into some kind of perspective, consider it this way. If 300,000 people came out to see your band play over the course of a weekend festival, you’d be considered bona fide rock star. Mind you, that number is still a bit shy of the RIAA Gold Record certification mark of 500,000 units, but it’s still a darn impressive turnout for a title that is just hitting the open beta phase.

Aftermath is a fairly ambitious project, with many additional features beyond the baseline survival mechanics. In fact, during my recent hands-on demo during the closed beta, I was able to briefly tinker with some of the systems that aren’t yet present in the open beta, but will hopefully see a return in a future update.

For example, one of the questions I had for design lead Adam Skidmore was whether we could expect to see vehicles in-game at some point. Interestingly enough, vehicles had previously existed, but were essentially disabled while certain wrinkles in the physics are worked out. While I didn’t get to drive a vehicle for long, what I did experience felt right for the setting. And I also have to admit that it felt somewhat gratifying getting to blow the thing up with a few rounds from assault rifle.

It remains to be seen if or when vehicles might return, but in the meantime there is still plenty of solid gameplay to be found in the current open beta client for Aftermath. While overall users have dipped a bit following the weekend, Aftermath is still showing a solid number of concurrent users on Steam, keeping it on par with notable MMOs TERA and ArcheAge as a point of comparison.

Aftermath is also available as a direct download from the official website, where you can also learn more about the game.

To read the latest guides, news, and features you can visit our Romero's Aftermath Game Page.