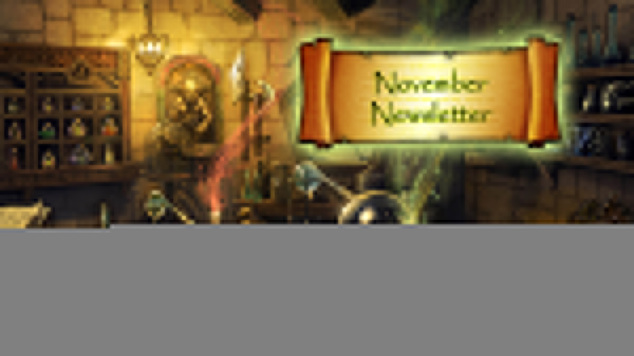 The upcoming MMORPG Pantheon: Rise of the Fallen put out its first monthly newsletter this month for November. Senior Creative Lead Brad "Aradune" McQuaid addresses future potential players of the game on everything from team-changes and financial backing, to the updated website and gameplay development focuses.

Below are a few highlights from this first monthly newsletter.

"Hello all, Aradune here, and welcome to our first Pantheon: Rise of the Fallen newsletter! A lot has been going on as of late, both internally and externally. And releasing the first issue of this monthly newsletter in many ways marks the culmination of these efforts, so it’s really very exciting to be writing this up and getting it out to all of you, our loyal fans."

"No longer is there speculation as to whether this project is on course and moving forward. No longer are some people wondering if Pantheon will just be an ‘old school’ MMO, or an emulator of sorts. Now people interested in the game can read up on its details and explore the depth that is truly there."

Thanks to recent seed-funding, the team was able to add some business and PR professionals to team:

The funding has also allowed the team to add several other people to the development roster that were previously volunteering their time. In the near future, Visionary Realms will be looking to start adding additional artists and designers:

"The goal is to continue to get the word out there about Pantheon, keeping the communication lines up and running, reaching out and establishing relationships with the media, involving us in shows and panels, and even just making sure our message boards and Facebook page is well moderated."

"This, combined with solid financials and production planning, means we are poised and ready to go after the additional funding necessary to build up our team of world builders and environmental artists who will be necessary to create the vast, epic fantasy world that is Terminus."

Game Client and the "Danger Room"

The team has been hard at work getting a playable client established that allows the developers to create a character, choose from up to five classes, and playing through any one of five zones from levels 1-10, complete with mob spawns, item drops, inventory, merchants, and even banks.

According to Brad, the combat is already a lot of fun - and the team has even built an internal playable matrix called the "Danger Room" for future combat testing and refinement as they continue development on the game and move towards alpha testing:

"We are currently hard at work tuning and tweaking this foundation, internally testing these zones as well as the in-house zone we call the ‘Danger Room’, looking through detailed combat logs and bug reports and adjusting formulas and data accordingly. Very soon we will be ready to start our next major milestone which will include the rest of the classes, higher level content, features, and functionality. When finished, it will put us in a great position to start bringing in external pre-alpha and the alpha testers."

Last but not least, Aradune took some time to talk about changes and updates to the game's official website and point out all the new art, information, and interfacing that should allow players curious about the game to find out what this game is all about:

"We’ve made sure we have what we need in place with the web pages, with Facebook and Twitter, and now with this mailing list to better communicate with all of you, keeping you more up to date as to where the project is at and where it’s going."

"Because of where we are at and what we’ve accomplished both internally and player facing, we find ourselves in a position of passion-fueled confidence. Not only is the new website a lot more polished and visually appealing, but it also contains detailed lore, a comprehensive FAQ, and a lot more information about what makes Pantheon truly different."

I've personally been browsing around the updated website, and getting a better grasp of the intended design and gameplay that Pantheon hopes to achieve. The developers have been quiet over the past several months, working hard on all of the above items and many more as they continue to evolve Pantheon into a unique MMORPG of its own.

I'm looking forward to seeing how the developers achieve some of the features they have planned on the game's website and that Brad has mentioned in this latest update.

If you want to read the full November newsletter for yourself, you can find it on the newsfeed of the game's official website, here.