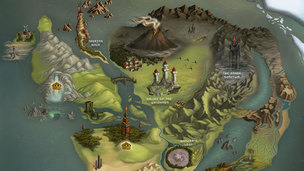 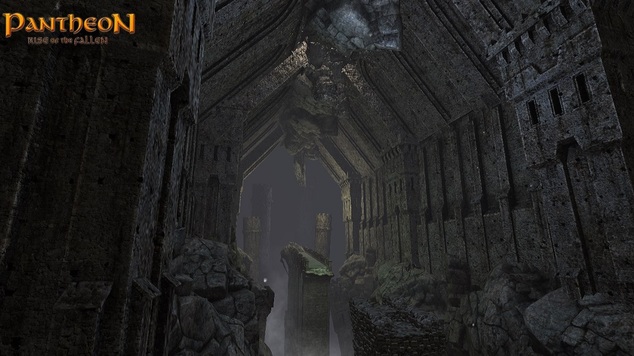 Addendum 12/5/14: Since this article was originally published, a member from Visionary Realms dropped by to let us know in the comments that Laurene Wells and Visionary have split ways due to personal statements she has made, which I've written about several times. I would like to personally extend a thanks for coming here to clear that up, as well as personally thank Visionary Realms for siding with reason here. Wells' hateful statements made me want to stop following a game that I've been quite excited over and have been writing about with fervor since I first heard of it. I look forward to continuing to cover Pantheon: Rise of the Fallen without reservation stemming from comments a producer made. Thank you, Visionary! Now, let's get back to that article:

For the third month in a row, Visionary Realms has released a monthly video update to let everyone know that yes, Pantheon: Rise of the Fallen is still a thing and it's still chugging along. Once upon a time, I was really excited for this game. That was back during the original development team lineup. Vu, the original dungeon designer for EverQuest, was also creating dungeons for Pantheon. Silius, one of my favorite developers, all around solid dude, and the lead designer for Vanguard: Saga of Heroes. There was a lot of people on the development team for Pantheon who had me extremely excited. There was a volunteer team called the Lore Four, who were taking pieces of Pantheon lore and fleshing it out into a fully developed story. The team was passionate, but most of all, incredibly accessible and humble. One of my fondest gaming convention moments would be back in the old Fan Faire days (now SOE Live), hanging out in a friend's hotel room, playing Dungeons and Dragons with the Vanguard team. Silius was always easily approachable, which is definitely one of the reasons I've always had a ton of respect for him. He's also a total no bullshit, tell-it-like-it-is kind of guy. Like I said, all around solid dude.

But, this isn't a developer profile on Salim Grant, so pardon my fan-galling above. I am just using him as an example to really point out that at one time, I was ridiculously excited for Pantheon. However, Mr Grant, married with children, couldn't stay with Pantheon once Visionary's failed crowdfunding attempts didn't pan out (I really wish studios would just do multiple small drives rather than one massive one, because Star Citizen is an outlier). People gotta get day jobs. Passion alone can't do things like pay your electric bills, buy dinner for your family, or any other of these luxuries the rest of us wage slaves like to have access to. When I first heard about Pantheon, it was accompanied by a 2017 at the earliest release date, but with that team lineup, I could wait.

A lot more has happened with Pantheon beyond just the core development team, not including Brad McQuaid, leaving the project. I'm okay with controversies, also. I know there have always been a lot of rumors, like McQuaid pilfering Vanguard's cash reserves to fund his drug addition. I never cared if they were real or not. As far as I'm concerned, the start up cash for Vanguard wasn't my money, so what got done with it wasn't my business. If McQuaid had a drug issue, out of concern for a person who has made games I've enjoyed over the years, then I can only hope he would get the help he'd need. Otherwise, again it's none of my business, so I've never wasted much time on these things. They've always remained in my head as just rumors, so these paragraphs here are about as much effort as I've put into the whole controversy to date. New controversies are popping up, again, this time with Pantheon. The first was when McQuaid took about $40,000 out of crowdfunding Visionary had raised to pay himself.

So, he paid himself. Why is this even an issue? It's seen by members of the community (I'm extending this to fans of MMOGs and not just those within the Pantheon community itself, although there are people who left it when this news came out) that he's dipping into funds that aren't his once again, without paying other people on the team. Whether or not people criticizing McQuaid over this would be happy if the money was divvied up among everyone, or if it should be kept purely to keep servers up and running is unknown. We can only look to these maybes as hypotheticals at this point. Do I agree with McQuaid paying himself? I can see both sides of the argument here. I understand why he used this money, but I can also understand the community's disagreement with this. Again, it's not my money, so I don't want to take the energy to pick a side and be angry at the other side. However, I am bothered over the addition of the latest producer and I am concerned over the shift to an all-volunteer team for the aspirations of a AAA title. I already touched on this when I covered the October video update, so we'll just skip that and spare us all the time of a repeat.

Regardless of what's going on in the personal lives of the latest iteration of the Visionary Realms team, the rumors and controversies surrounding them and everything else, if these only made me want to be on the fence about following the game still (although, I will admit I pretty much gave up following Pantheon after news about Laurene Wells' view on other human beings have come out, because this is 2014 and we should all know better at this point), the gameplay featured in the November update has been the final straw.

I've mentioned before that during one of the monthly update videos, McQuaid stated that at the time, all of the combat really happened in the text box, which was intentional design. I was hoping that this was due to something in the super early pre-alpha state of the game, because it was something the devs needed. However, all I seem to focus on watching these videos is how truly boring and uninspiring the combat is. Mind you, I enjoy tab-target type combat. I'm not a big fan of action MMOs where everything is based on area of effect damage, ground reticles, and conal damage. I enjoyed my brief foray into WildStar, but there's just something about the necessity of a hard target that sucks me back into games like World of Warcraft and EverQuest II. Still, the combat in Pantheon bores me to watch. It just looks like a staff slowly swinging at targets with minimal...anything else. However, I do find the second video released by Visionary to be far more up my alley of interest.

I'm a fan of behind the scenes kind of things. I like watching things be built. I enjoy watching something change into something completely different – a transformation story. I'm doing that in my life currently on several levels, which is something I've been sharing with my friends. It's important to me and I like that they're supportive of me. This second video is a time lapse of an area called High Brace being built from the ground up. You can watch as Visionary world builder John Diasparra creates the latest zone for Pantheon in Unity. There are plans to release a second High Brace video once the zone has been completed. I find the High Brace video far more interesting than the November update. While I'm pretty sad about having such a hateful person like Wells on the team, I'll at least be happy for everyone else that Pantheon is continuing to move forward, even if I'm no longer in support of the project.

Pantheon Prays For An Angel