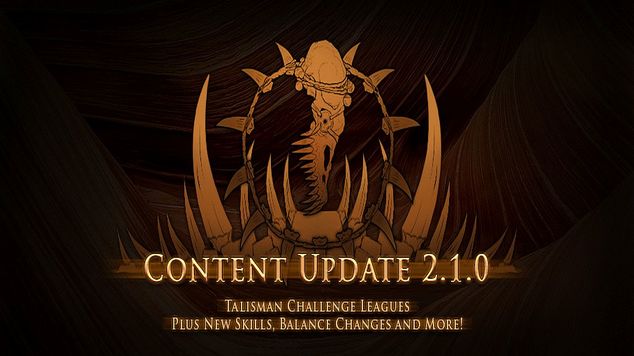 Are you excited for the Talisman League coming to Path of Exile? This challenge league has a, you guessed it, heavy focus on talismans and talisman collection. A talisman monster will spawn around once per level and drop a talisman. Other monsters can loot it, but if you defeat them it'll drop again. Each talisman is corrupted and has a really cool implicit mod on it. You can combine 5 talisman into a talisman of a higher rarity, or combine rares to get a reroll if the talismans you haven't aren't good. At the end of a league in Path of Exile, characters are moved into the hardcore / standard leagues respectfully, so this is a good chance to gear up with some really cool gear and play in an all new league coming with 2.1.0.

Talismans are always corrupted (i.e. can't be crafted), but have very strong implicit mods. For low-level players, Talismans without other mods will often be more powerful than whatever amulet they would otherwise be using. Talismans can also drop as magic, rare and unique. Magic Talismans are a large upgrade over normal ones because they have up to two mods in addition to their strong implicit. Obtaining a rare Talisman is a big improvement also, because it can have up to six mods. Some magic Talismans with two good mods are better than regular rare amulets. Rare Talismans with six good mods are among some of the hardest-to-find but most powerful items in the game.

Talismans are basically amulets with some special rules. You can even summon a super special boss and fight him for a chance at some cool loot. So there's a lot to do with this new league and it'll be a great time to hop back into PoE and check it out.

You can read about the details over on the forum and check out 2.1.0 details which is coming out December 11th! Be excited.

Path of Exile Crowd-Funds Over $200k
<p>Indie developer Grinding Gear Games pulls in $200k in crowd-funding for <em>Path of Exile</em>.