Man Arrested for Virtual Theft in RuneScape
<p>It's always amusing to watch a virtual thief go down in flames. Such is the case of this week's not-quite-r
News
RuneScape 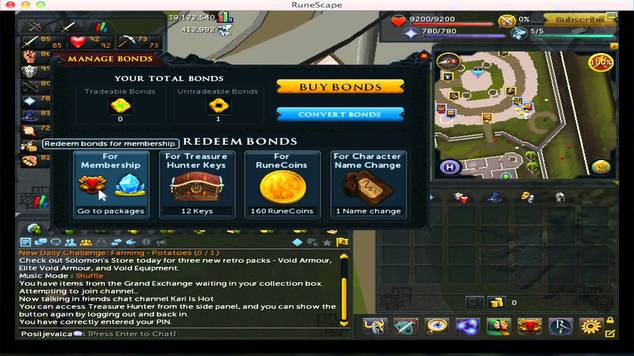 Jagex is taking the war to gold farming with the launch of its new RuneScape Bond, a new currency that will allow players to trade freely for any item in-game, including premium account benefits. Similar to EVE Onlines PLEX, RuneScape Bonds can be traded for with other players or purchased for about $5 and redeemed in-game for 14 days of RuneScape membership, eight Squeal of Fortune spins, or 160 RuneCoins. Multiple bonds can also be exchanged for RuneFest tickets and will also be available to donate to charities at a later time.

Be sure to read the RuneScape Bond FAQ for more details and check out the video below for a message from Jagex CEO Mark Gerhard about the new Bonds.

BONDS INTRODUCED TO REWARD PLAYERS WITH BENEFITS INCLUDING MEMBERSHIP

Thursday 26th September 2013, Cambridge, UK - Jagex, the creators of the hugely popular and Guinness World Record holding MMORPG RuneScape, have introduced Bonds to the fantasy online world, providing players with the means to trade in-game effort for tangible benefits, including membership. The launch of Bonds is Jagex's latest innovation in free-to-play, a market first revolutionised by Jagex with the landmark launch of the first free browser MMORPG well over a decade ago.

Bonds completely liberate player-to-player trading, offering RuneScape players more choice and freedom than ever before. This includes the ability to now access all premium membership content through the in-game wealth earned by dedicated players, who can also gift Bonds to a friend or fellow clan member anywhere in the world. Available to purchase directly from RuneScape.com, the new 'pay-through-play' currency is intended to help all parts of the community access premium content and services during these tough economic times.

"The launch of Bonds for RuneScape is a really positive move, which will improve the game's economy and give players more choice in how they get membership. We care as passionately about RuneScape as the game's community, and are committed to laying the foundations for the next 10 years of RuneScape growth. This update is a firm step in that direction," said Phil Mansell, Executive Producer of RuneScape. "Many players will have accrued a small fortune's worth of GP and valuable items in-game over their years of playing RuneScape. By introducing Bonds, millions of dedicated players will now have the choice to fund their membership and other services for free through the exchange of in-game wealth for Bonds."

"During RuneScape's long and illustrious history it has remained relevant and continues to thrive based on Jagex's ability to evolve and respond to challenges and opportunities alike. The launch of Bonds as a new 'pay-through-play' option for our customers is a tangible example of our commitment to ensure the game continues to do so," explained Mark Gerhard, Chief Executive Officer at Jagex. "The key to Bonds is that there are now two paths for our players to access and enjoy every bit of content the game has to offer. No player need ever feel excluded, since they can now access everything in RuneScape by whichever payment mechanic they choose."

The launch of Bonds will also eradicate gold farming by flipping the balance entirely to free trading within and by the community, benefiting players directly and improving the experience for all.

Starting in 2001 with their flagship free-to-play adventure game, RuneScape, Jagex has created a long-standing reputation for crafting the world's best online games services.  Today they stand as the UK's largest independent games developers and publishers.  With over 40 titles published to date, Jagex prides itself on developing and publishing hugely popular, accessible, free-to-play games for millions of players globally.  For more information please visit www.Jagex.com

Venture forth into the rich and immersive medieval fantasy world of Gielinor, where even the smallest of actions affect the vast world around you. Recognised by Guinness World Records as the world's most popular free-to-play MMORPG, with over 200 million players and counting. BAFTA nominated, RuneScape offers unparalleled levels of choice to its players, where they can be anyone, slay anything and go anywhere in their own unique adventure, all within the browser window.  Start your greatest adventure today at www.RuneScape.com