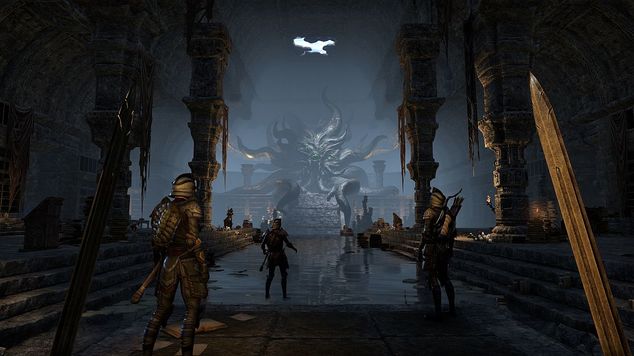 The first DLC pack for The Elder Scrolls Online: Tamriel Unlimited is now out everywhere, worldwide. If you can play the game, you can now play Imperial City! Hooray! Instead of trying to hash out what it includes to you, I'll just copy and paste from their press release, which you'll find below. Imperial City retails for 2,500 crowns or comes free with ESO Plus. To permanatly have it as a free-to-play member, you'll need to buy 3,000 crowns at $24.99, but you'll have 500 crowns left over, so yay! ESO Plus is $14.99 a month and you get 1,500 crowns through that. If you save for two months, you'll be able to permantly buy it, assuming you wanted to switch over to free-to-play.

You can look at buying the DLC pack over at the official site. The DLC pack is not required to play and only contains additional content, mostly for level 10+s.

Featuring six distinct Imperial Districts, battle against the forces of Molag Bal as well as the other Alliances.

Whether participating in massive PVP battles in the Imperial Districts or adventuring in one of the new dungeons, players will be introduced to new quests and enemies, including the Xivkyn.

Fight the forces of Molag Bal to plunder Tel Var Stones, a new form of currency you can use for exclusive Veteran Rank 16 weapons and armor, or search for new Treasure Vaults containing other rare finds.

Exploring Imperial City or visiting the Crown Store will reward the player with a host of new collectibles including pets, mounts, costumes, and polymorphs!