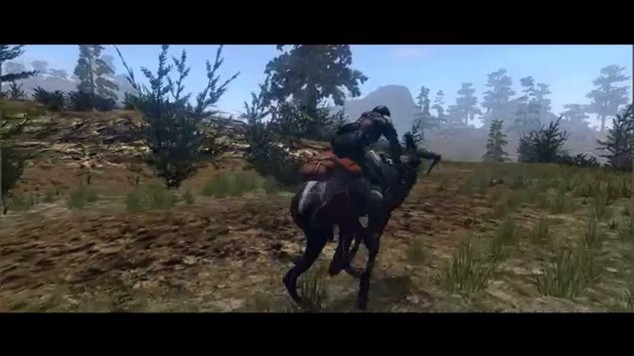 Even though it's dated yesterday, this newsletter found its way into my inbox in the wee hours of the night. I swear, I didn't meet my old lady bedtime hour and ended up going to bed a little late, mostly because my Halloween Part Two article wasn't going to write itself and I kept finding more games celebrating the second best holiday to write about. Above and Beyond Technologies didn't hold back with this month's newsletter and stuck the meatiest portion of news at the very top, instead of holding out on us. The End of September Progress Report can be seen in its full glory on the official website, which is a massive update. The Repopulation is currently in alpha, with the secondary string of backers getting access to the game now. Even though The Repopulation is in alpha, it remains one of the most anticipated MMORPGs, especially with folks who want a little more sci-fi and a little less elves and fantasy.

Granting access to Round 2 backers isn't the only Kickstarter-related news coming out of the progress report. The Points of Intrigue system has been added in, which is an extension of The Repopulation's generalized adversarial camp. Unlike camps, Points of Intrigue will have a high degree of customization, rather than the strict ruleset of camps. This system will ebb and flow based off of player population at the time, spawning randomly throughout the world. The example given is that a Point of Intrigue could take place, where a spawn attracts the local wildlife in the wilderness. Players can clear out the mutant bears and whatnot, and then observe the point until it becomes owned by either their faction or mankind. Owning the point will then grant buffs to friendly visitors, but those who helped clear to the point for ownership will receive special rewards like Training Points and Achievements. Related to Points of Intrigue, but from a PvP perspective are Control Points.

A more advanced type of Point of Intrigue which was also introduced this month is it's PvP oriented cousin: Control Points. Control Points are small camps which spawn in these locations that are populated by one of the factions NPCs. This can include missions and vendors, as well as military personnel. The player population at the time that a camp sprouts up is taken into account to weight which factions receive the most camps. Underpopulated factions will have more camps spawned to support them. Opposing factions can conquer these camps by killing the NPCs and then standing in the control point for long enough for it to first become unclaimed and then switch to their factions control. Upon conquering the point their own factions NPCs will spawn, which could also include vendors and mission givers. The conquering players also receive the usual slew of Point of Intrigue awards. We plan to extend the Point of Intrigue system to include additional rule sets in the future.

Updates include a Medic overhaul (including new and updated abilities), new points added to the tutorial to help with the influx of new testers, new tips and when they are triggered have been added in, and default controls have received an update pass, including new tweaks and adjustments. In addition, points of the game that received larger updates in September include: Adversarial Camps, Auctions and Work Orders, Audio, Combat, Dens, Engagements, GM systems and tools, Graphics, Housing, Inquiries, Items and Fittings, Minigames, Missions, NPCs, Pets, Player Created Tournaments, PvP, Skills and Abilities, Trade Skills, User Interface, World (areas, control points, points of interest, etc), World Events, bug fixes, and tons more. Missions received the largest amount of updates this month. Where systems could not be cleanly updated, such as tips, they were completely rebuilt, keeping only the best parts.

Healing received so many updates as a whole in September that Above and Beyond put together a Healing Featurette for The Repopulation. Healing will not be about standing at the very back flipping through a defined set rotation of skills to work on keeping your raid alive, playing the health bar game. Remember Complete Heal rotations in EverQuest? Before voice servers were a thing, we'd make hot keys announcing when we were beginning our cast so the next Cleric could count to six and begin their ten second cast. Super fun, if your version of fun includes poking yourself in the eye with a mildly blunt and not very pokey object.

Healing in The Repopulation will be intuitive and varied, so that you can heal how you want, whether it's rolling heal over times across the raid, direct heals, big heals on your tanks or what have you. Eleven new or revamped abilities have been given to healers to expand their toolkit and make healing more responsive and fun. Who wants to feel like they're stuck playing some sort of Excel spreadsheet game? In addition to First Aid revamps to give Medics extra oomph and healing-charged fittings to expand healer capacities, PvE and PvP healing is aiming to become a more active support role, rather than players taking a back seat. I must say, as someone who loves the intensity that healing outside of comfortable situations, I'm pretty stoked on this update and really want to get my hands on the game.