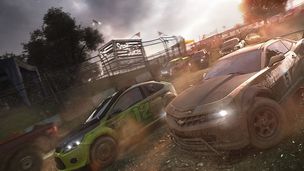 The Crew: Wildrun Beta to Begin October 15th
The Crew, an MMO racer, is having its expansion/DLC launch into bet October 15th, with a racing competition and
News
The Crew

Ubisoft Pushes The Crew Launch Window Back Deep into 2014
<p>Ubisoft pushes the release window for its online open-world driving game back into its next fiscal year.</p

Ubisoft made some revisions to its release forecast today by pushing two of its big key titles back into its next fiscal with The Crew and Watchdogs. Both titles were originally scheduled to launch this fiscal year with Watchdogs being a launch title for next gen consoles in November, but a delay now sees both pushed back into the next fiscal year. More specifically, IGN reports that Ubisoft confirmed the new launch windows in a conference call this morning stating that Watchdogs will now release between April 1st and June 30th, 2014 for PlayStation 3, PlayStation 4, Xbox 360, Xbox One, Wii U, and PC, and the online open world driving game, The Crew, will launch sometime between between July 1st and September 30th, 2014 on Xbox One, PlayStation 4, and PC.

"Our long term goal is to win the next generation. The tough decision s we are taking today to fully realize the major potential of our new creations have an impact on our short-term performance. We are convinced that, longer term, they will prove to be the right decisions both in terms of satisfaction for our fans and in terms of value creation for our shareholders. We are building franchises that will become perennial pillars of Ubisofts financial performance. In a context of growing successes for mega-blockbusters, the additional time given to the development of our titles will allow them to fulfill their huge ambitions and thus offer players even more exceptional experiences stated Ubisoft co-founder and CEO Yves Guillemot. He concluded Fueled by strong momentum for PlayStation 4 and XboxOne, calendar 2014 will see the return of growth to the console market. Combined with the quality of our line-up and our strong financial situation, this growth will allow us to achieve record operating income in fiscal 2014-15 and 2015-16."

The delay leaves a pretty big gap for Ubisofts next gen console launch lineup and also poses another problem for players that pre-ordered a Watchdogs Xbox One or PlayStation 4 bundle, something that Sony told Video Gamer in a statement that they are working with retailers on to manage the situation.

To read the latest guides, news, and features you can visit our The Crew Game Page.

The Crew: Wildrun Beta to Begin October 15th
The Crew, an MMO racer, is having its expansion/DLC launch into bet October 15th, with a racing competition and