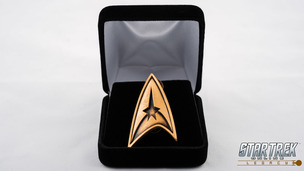 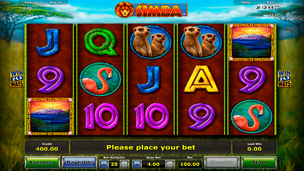 Simba Mobile Slot Games: First Impressions
If you do a bit of research about what the word “Simba” actually means, you’ll find out that it means “Lion” in
Preview
Star Trek Online 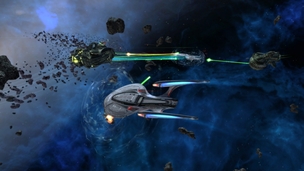 As Star Trek Online launch
gets closer and closer players everywhere are starting to think about
guilds, or fleets in STO terms. Whether you're going into the game with
a pre-established fleet, or thinking of finding a new home to settle
into once playing, fleets are going to play a big part in the STO game.

Ten Ton Hammer: So how does one start
their own fleet?


Stephen DAngelo: You visit a
fleet manager at the Star Base. Its a small fee, and at the moment you
have to have a full team, but soon youll be able to team with just one
other person to start the fleet. Then those members will become the
starting members of the fleet.

Ten Ton Hammer: How many ranks are
available in fleets?


Stephen: We currently have
seven ranks. Each can be renamed. Each can have privileges assigned to
them independently. So you can use them any way you want.

Ten Ton Hammer: What are some of the
privileges you can assign to members?


Stephen: Privileges range
quite a bit. You can allow ranks to invite members or not; the ability
to kick members from the fleet; banking privileges. There are also a
few privacy settings for how much of the fleets internal information
youre allowed to see.


Stephen: Theyre accessed from
the Star Bases, the central hubs; the same way you access your personal
bank.

Ten Ton Hammer: Can the fleet vault be
expanded?


Stephen: Not at the moment. In
the current beta builds, we do not have a leveling mechanism for
fleets. So they are what they are. We do want to add that, but it
probably wont be present at first release.

Ten Ton Hammer: Is there a cap on how
many players you can have in your fleet?


Stephen: Yes, but its not set
in stone. Its currently at 250. We want it to be much larger. We
believe the players are going to want huge fleets.

Ten Ton Hammer: Is there a minimum
amount of players you need to have in a fleet?


Stephen: We currently have a
minimum of five people to start a fleet, but you can go down to one
after that. Were probably going to reduce that to two to start a
fleet.

Ten Ton Hammer: Will special
characters in guild names be allowed, like apostrophes?


Stephen: Yes. Quite a few
special characters are allowed, partly because the Star Trek Universe
has Klingon names, which have apostrophes in them, and partly because
my name has an apostrophe in it, so they have to be allowed everywhere.
(laughs)

Ten Ton Hammer: What are some of the
other advantages to being a part of a fleet?


Stephen: The only benefit that
we give out in the current beta build is that when you join a fleet,
you get an extra costume slot to dress your captain, so you can have a
fleet costume thats separate from your normal costume.

We allow fleet leaders with the right privileges to set up costumes
that are stored on the fleet uniforms. So you can set up your uniforms
on your fleet, whether for officers or formal, and your fleet can then
quickly assign the uniforms to their character.

Ten Ton Hammer: Does that include
different insignias?


Stephen: Its the whole deal.
You want this kind of pocket on your pants here? An insignia placed
there? Anything you can do to customize your character can be set up in
a fleet uniform.


Craig Zinkievich: The uniform
era, the style of the uniform, as well as the insignia.

Ten Ton Hammer: Can characters create
their own insignia, or will they select it and customize it from a list?


Stephen: Its a large list of
the uniform insignias.

Ten Ton Hammer: Can you put it on your
ship?

Craig: So you will have your
fleet logos on your ship and your uniform.

Stephen: And that is pretty
widely customizable but it is set from a large selection of predefined
logos.

Ten Ton Hammer: Are there any plans
for fleet leaderboards?


Stephen: We definitely want to
do that, but it wont be present at initial release.

Ten Ton Hammer: Is there anything else
youd like to tell readers about fleets?


Craig: Its one of those things
that you take another look at after launch. You see what you can add
and what people want; you see how they use the tools. We are excited
about how Star Trek Online will use fleets and guilds a little
differently than some other MMOs, and really be able to go full on with
social spaces and such for fleets down the road.

Stephen: Were still adding
features as we go through the beta process. Theres a long list of
things people want to do with their fleets and were putting them in as
we go.

One of the interesting things weve recently put in is the ability to
see what your fleet members have been doing while you were offline. You
can see an activity log of whats been going on. Major events like boss
defeats and leveling up are put in the log that everyone can go look at
to see whats been happening recently. Thats just an example of things
were adding to make the fleet feel more alive and a participatory
event.

Ten Ton Hammer: How many entries does
the log retain before it truncates?


Stephen: It keeps up to 500
entries at the moment. For a small guild, thats a lot; for a large
guild, it isnt very many. So were tuning the number.


Stephen: Thats one of the
items in our queue to consider before release, but we havent committed
to that one yet.

Simba Mobile Slot Games: First Impressions
If you do a bit of research about what the word “Simba” actually means, you’ll find out that it means “Lion” in