Crowfall: Take The Throne
Crowfall continues to go from strength to strength, with The Trial of Maeve set to start.
Feature
Crowfall 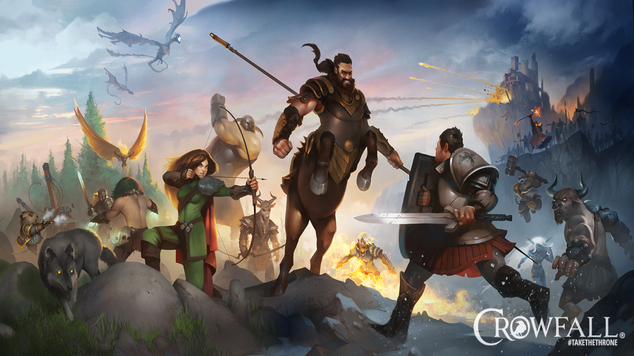 ArtCraft Entertainment, an Austin, Texas-based independent game studio, today announced the commercial launch of its genre defining, competitive PvP MMORPG, Crowfall™. Gamers looking for a new take on player vs. player (PvP) battles will be right at home in Crowfall with an innovative design that thrusts them into constantly changing campaign worlds, each one with different maps, politics and rule-sets. For a first look at this world, check out the new Crowfall Launch Trailer, Glory, Wealth and Power.

“Crowfall represents a new frontier of online gaming,” explains Crowfall Creative Director J. Todd Coleman. “It was designed to be a constantly changing, dynamic feudal world. The story of Crowfall will be written by the players. They will claim territory, build massive fortifications, lay siege to their neighbors, forge alliances and topple empires. Their deeds will become the history of this world.”

Crowfall breaks from traditional Massively Multiplayer Online game design in other ways, as well. With an incredibly fast advancement curve, players can become competitive in hours—but the deep and multi-faceted advancement system (which allows millions of unique combinations of race, class, promotion class and subclass disciplines) provides months or years of exploration for players who want to master the intricacies of combat, harvesting and crafting.

“Most games force the player through hundreds of hours of questing to reach the ‘end game’ experience,” said Coleman. “We decided to shortcut that, and put players right into the action. In Crowfall, the end game IS the game.”

Are you ready to join the battle? Visit Crowfall.com.