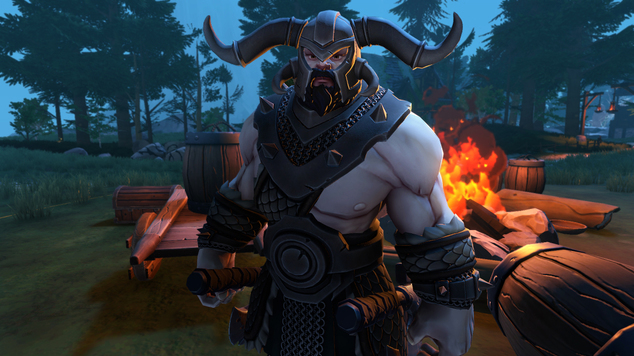 Crowfall: War Stories - Blazzen
We sat down with Crowfall player, Blazzen, to talk about his chosen War Story.

If you've arrived here having read our coverage of Crowfall's War Stories, The Maeve Trials, or the 5.90 update, you'll find the full interview with Blazzen below. In it, he talks more about his siege and how Crowfall and the scope of play it affords you gives rise to such dynamic, player driven decisions. Having played Crowfall since the Hunger Dome in 2015, he considers himself an avid player, and early backer.

Explain the strategy behind the siege at the keep.

Blazzen: There are a couple of things that you don’t actually see in the video because I cut it down a bit. We actually tried a different way to get into the keep. We actually tried to use a trebuchet as a ladder, like a firetruck…the way a ladder goes up the side of a building. So we tried to place a trebuchet and walk up the arm, like a ladder, and they caught us doing that and there about twice as many of them as there were of us and they kind of ran us off…

After we were run off we formed up again. We were sort of spread out at that point. We had a couple of our scouts watching what the other faction was doing and when we saw the Balance Faction come in we knew we had an opportunity. So we left a couple of our scouts on that side of the Keep. So as soon as those two groups, Balance and Order, started fighting we knew that was our chance to set up siege engines on the backside of the Keep and blow a hole and just just rush into the tree…and just get in before they could react. And that’s what we did.

Talk about that idea of running up a trebuchet. Where did that come about?

Blazzen: So the idea of running up a trebuchet like a ladder was something one of our other player’s discovered. The thing is he was able to pull it off flawlessly because he’d practiced it several times. But try 15 to 17 other people…all trying to do it the same way and who had never tried it…it just didn’t go right. People couldn’t get over. It just didn’t work well. So we had that idea going in and tried it and it just didn’t work. And then an opportunity presented itself and we took it. That was all just very spur of the moment. And that was what was so cool about it.

Actually climbing the trebuchet was just something that this guy had discovered and we knew we couldn’t just assault the keep and take it in a straight up fight because they had twice as many people as we did so we were just going to have to try and sneak in when we had a chance. That was our original plan to try and climb up on the trebuchet. That was kind of one of those clever use of game mechanics type of things…but it just didn’t work out. But we basically using the same type of tactic. We just blew the wall down instead. The other team was just occupied on the other side.

There wasn’t any coordination with the other faction. That is something that does happen from time to time…especially if you know one faction is twice as large as the other two factions. You know it’s not uncommon to coordinate typically thru Discord with players of the other faction. But that particular night it was just happenstance that Balance attacked Order right when we needed them to and we just took that opportunity. 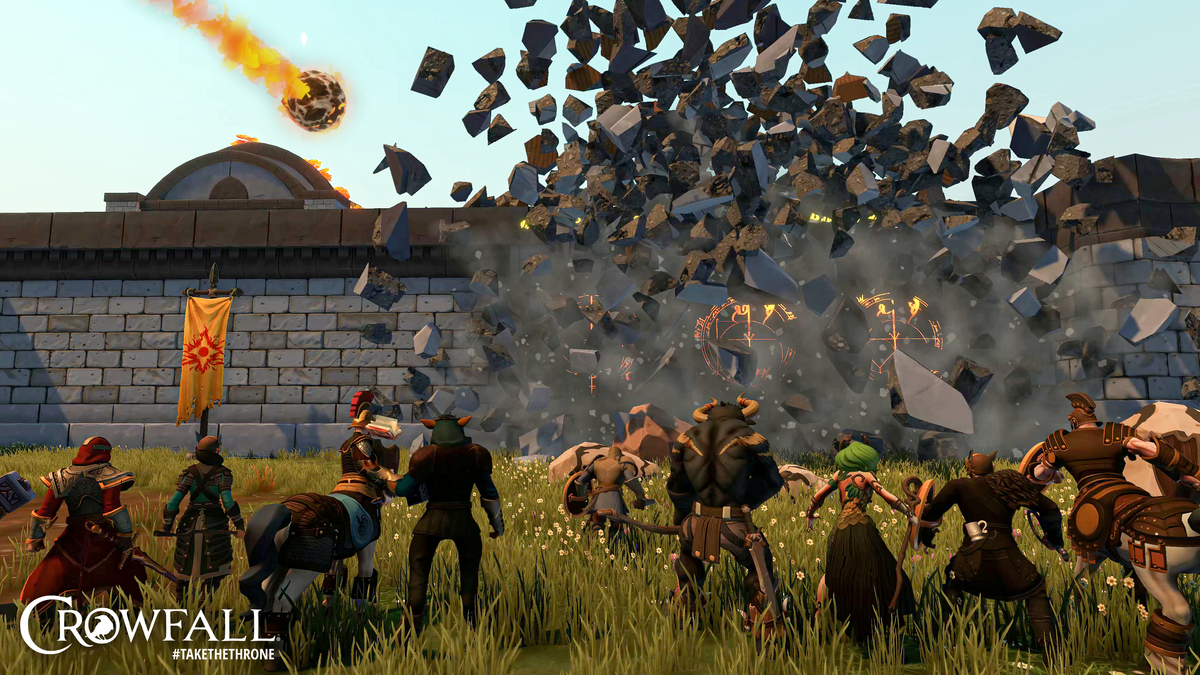 How does this dynamic make Crowfall unique?

Blazzen: It’s just not the same. A lot of other games where you have battlegrounds…there are a lot of games with battlegrounds…different types of battlegrounds. You might have ‘capture the flag’ or ‘holding three control points’ or whatever you might call it, it gets to a point where there is a common strategy or common meta that people employ and it just comes to who can execute the meta strategy the best. But in Crowfall you don’t see that as much because there are just so many different ways to go about it, for instance trying to climb up a trebuchet like a ladder. You don’t see that in a lot of these types of games where it’s not just a very organic experience, when it is locked into a battleground on a small map. Same set of rules. The rulesets that Crowfall has….it’s sandbox right…it leaves a lot up to the user to be creative and I think that’s a big difference between the open world sandbox game like Crowfall and a lot of the other more ‘theme park’ leaning PvP games.

Battleground games typically have the same number of people against one another so you don’t have to be as creative to overcome that. Overcoming odds is something that’s really fun in these games. When you pull off an outnumbered win it’s that much better…it’s much more satisfying.

What feature that you know about are you most looking forward to in Crowfall?

Blazzen: The Dregs…the free-for-all ruleset…that will put a whole other layer for player freedom and politics and strategy. You are starting to see a little of that in the faction campaigns. Like for example I know there are times that opposing factions will coordinate to go against the larger or winning faction. The players who are doing that are probably the same players that will eventually play in The Dregs, the free-for-all ruleset. That’s the kind of stuff we are used to doing when we can choose the sides we’re on. That’s going to open up alliances, betrayals. Just the whole political meta game is what I really like in these games. I enjoy the factions in Crowfall but The Dregs, the free-for-all ruleset, is where I’ll play exclusively when that comes online.

What role do you take in sieges?

Blazzen: I’m part of a guild of players called Lords of Death. And we’ve aligned with a few other similar guilds to form an alliance (we’ve played together for more than a decade), The Death Alliance. We all go back to around 2009 with Darkfall. We sort of share responsibilities in the game when we play. Sometimes I lead. Other times I sit back and record and do other things. Even when I’m not, I might help point out things as we are in a siege. It’s usually a collaborative effort. I can lead and have in previous setups…but I’m finding now that I get older…I’m enjoying just sitting back and playing.

Blazzen: If you don’t have a guild with some level of organization it’s going to be extremely difficult to compete with those that do. In this game there are already a couple of guilds and they are primarily on the Balance faction and they are playing the game, even at this early testing stage, like a finished game. There’s a lot to do and a lot of fun to be had, but it’s still in testing. There are still wipes and new features coming online and there are a lot of other groups…a lot like ours…that are a little more on the casual side of things that do play and test and give feedback, but might not play it as hard as if it was a released game. And I can see the disparity in organization already between the groups that are really going hard at it…really have the organization…and then the ones who are more casual in their approach. And the groups that don’t have that at all just really don’t factor in a lot of times. You know, they are there, but there’s a huge dropoff. So having that person or persons who are organizing things and leading everyone and coming up with the strategies…and even on the crafting and harvesting side and having the best equipment and armor…organizing all that. It’s a game where having those logistics and strategy is really going to make a big difference.

Does the game encourage new people to come in and start playing?

Blazzen: Always good to fight new people. Honestly with the guilds currently in the game…many are longtime backers and we’ve kind of been bashing our heads against one another for a long time now. But I’m very interested about new players coming in and making the game accessible to them. And that’s where a lot of feedback has gone of late. Making sure that not too much power is gated behind high level armor and weapons…you know just really improving that new player experience. Things like God’s Reach was largely implemented for that. And having the different tiers of campaigns will help that also. Having players being able to start off in God’s Reach, which is kind of the newbie island, then move up to the faction campaigns and then once they’ve gone through those, having the option to move up to The Dregs campaigns. I almost think of it as being similar to professional baseball…where you have The Dregs as the Major Leagues, then you have Triple-A, Double-A and rookie ball. That’s essentially how I look at the campaign bands in Crowfall. 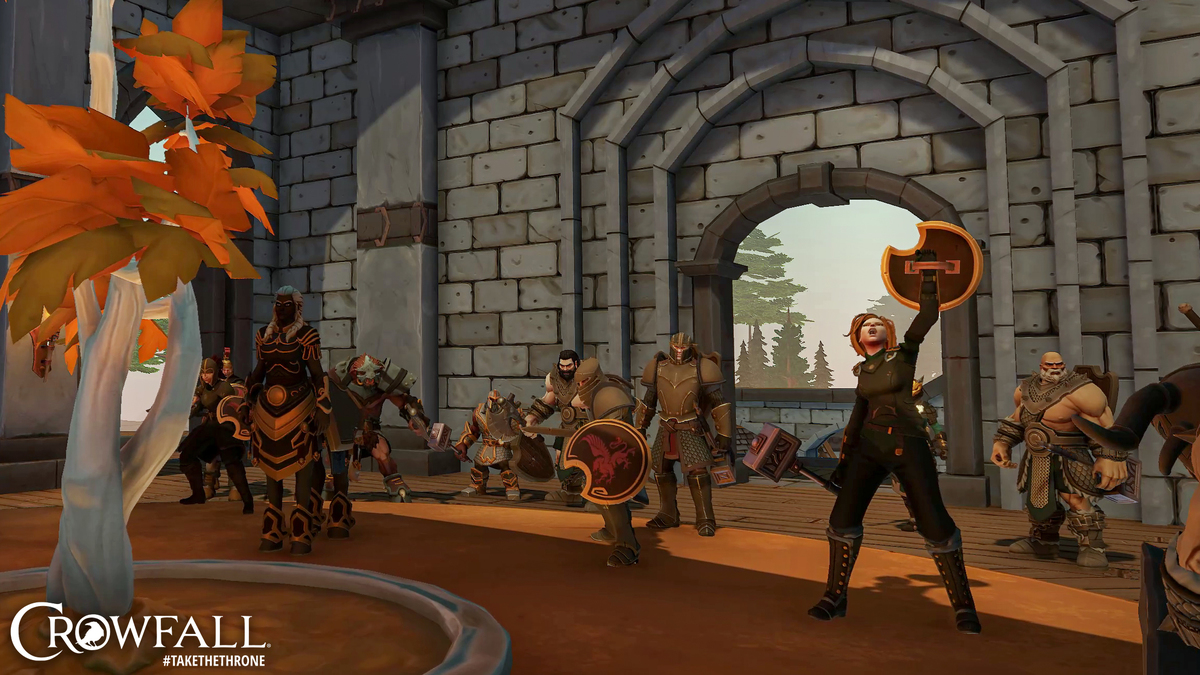 What makes fighting important to you when you play games?

Blazzen: You want to have good, even, fun fights. It’s fun to just absolutely steamroll someone every once in a while, but that does tend to get boring. The best fights and the most satisfying are the ones that are really close, hard-fought battles. Or battles like this one where you overcame odds to win. That’s the most satisfying for me.

What else out on the market is like Crowfall?

Blazzen: There’s nothing else available like this out there. Quite honestly it’s the main reason I’ve been testing for like 4 years is that there’s nothing else like it. The last game that really had this free-for-all, conquest-based PvP was Darkfall and Holy Wars and that shut its doors in early 2015 and a couple of months later this was announced and I haven’t turned back.

What kind of a gamer are you?

Blazzen: I pretty much play only PvP oriented games. It’s going to be a multiplayer game. My favorite games are Shadowbane and Darkfall. The first game I played was EverQuest in 1999 and I played for about 2 weeks on a PvE server until I discovered there were other servers where I could just kill the other people playing and since then it’s been all PvP.