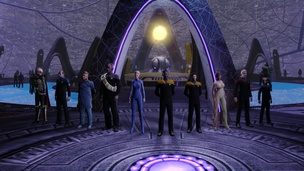 Within the videogame industry, Bill Roper is a true legend in every sense of the word.

In 1994, Bill began his career with Blizzard Entertainment, where he worked directly on such seminal blockbusters as Warcraft, Warcraft II, Warcraft III, StarCraft, Diablo and Diablo II, many of which sold multiple millions of copies and garnered numerous Game of the Year awards. He started in Blizzard’s sound department, working on effects, music and voiceovers, and eventually becoming Vice President of Blizzard North and a Director of Blizzard Entertainment. During his tenure with Blizzard, Bill oversaw and managed all external projects, coordinated internal development teams and headed up Blizzard’s project oversight teams, where he played a crucial role in shaping the direction of new games and intellectual properties.

In 2003, after 10 years of service, Bill left Blizzard Entertainment (along with several other executives from Blizzard North) to co-found Flagship Studios and Ping0 and serve as Chief Executive Officer. In less than five years, the companies developed, released and operated their first massively multiplayer online (MMO) game, Hellgate: London and oversaw development of a second game, Mythos.

Bill joined Cryptic Studios in November 2008 as Design Director. He is serving as the Executive Producer for Cryptic’s highly anticipated title, Champions Online.

As he personally embodies and represents the games he passionately works on throughout the global gaming community, Bill has built a strong reputation with media, developers and gamers alike. He has been featured in numerous articles in hundreds of worldwide gaming magazines and media outlets, as well as appearing in the New York Times, Newsweek, and on CNN.

When Bill isn’t busy playing videogames or making new ones, he performs with a strangely compelling renaissance singing group, Poxy Boggards, and adds to his already too-large DVD collection (which is in the neighborhood of 1,000, he estimates). Some of his favorite films include the original Star Wars and Indiana Jones trilogies, Ghostbusters, Pulp Fiction, Seven Samurai and The Usual Suspects, among others.

<< Back to the New York Comicon '09 MMO Panel Schedule