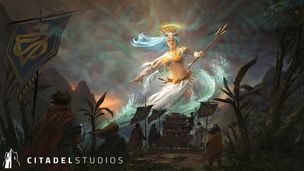 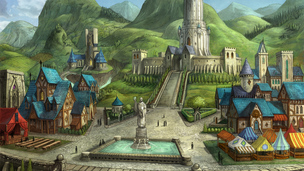 We sat down with Derek Brinkmann, Co-Founder of Citadel Studios to ask some hard hitting questions about just what is Shards? So far we know it's an open world top down sandbox game based on the idea of "your rules" came out of nowhere with an allstar team from several other AAA MMOs, including Ultima Online. However, just what is the game and what can we expect from it? Continue reading to find out.

The website states that the game will be an open world sandbox that allows anyone to create and link their own MMOs together. There is a ton of questions about this, so let’s get started with the simplest one. Since players will be able to run their own server, will characters be per server based (local to each individual server) or will they be shared throughout the entire metaverse.

Keep in mind, we are in a pretty early stage of development, but it works something like this...

Shards does not have servers in the traditional sense. The closest thing to a traditional MMO server in Shards is called a ‘cluster’. Clusters are the home for characters and they allow travel between all ‘shards’ connected to that cluster. There will be an official “Citadel” cluster, but they will also be run by players.

Clusters tie all their connected shards to a single ruleset. This prevents players from doing something unfair, like taking a character from a PvE-only world to one that’s hardcore perma-death PvP.

It may sound complicated, but we have some big ideas for how to simplify the player experience. As a player, you will simply choose from a list of clusters and hit play.

These individual shards, will players be able to self-host, purchase server space from Citadel (ala Second Life), or is this an undecided thing currently?

We want to keep our options open in this department. Our initial thought is that there are a lot of great, existing services that already do this for other games. In fact (though not surprising), we’ve been approached by some of them. Ultimately, we hope to allow players to run their shards any way they want, even if they want to run them out of their house.

Shards came out of nowhere with an interesting dream team and a bold fresh idea. How far into development is Shards Online and can we expect a go at crowdfunding?

We have been working with a very small team on a playable demo for about 6 months now. Our focus with this demo is to build as much of the core technology as possible and, at the same time, create a really fun experience that highlights some of the things that makes Shards unique.

One of our main goals is to get to an alpha stage before the end of the year. What exactly alpha will look like, in terms of features and number of maps, is still being determined.

We are considering several different options for fundraising. Crowdfunding is certainly up for consideration. The most important factor for us is how the community responds to our current direction.

Nope! Procedurally generated maps have pros and cons. With ‘shards’ that are custom made in our world editor, we can create much more interesting settings for adventure. This approach also allows us to create a larger variety of environments for players to explore.

Being a top-down open world MMO, are we looking more at Diablo III Online or more towards returning to something like Ultima Online. On the same thought, will this game be a lot like the UO shards ran off of emulators that players have these days?

The controls in Shards Online will feel familiar to players of Diablo III, but that’s about where the similarities end. Shards’ combat is much more tactical and skill-based. Character development and the world itself are much more open ended. There is no single story that you follow from start to finish. Rather, lots of stories that all tie into each other, much like the novels of the great Stephen King.

Ultima Online was not only one of the first MMOs, but also one of the most progressive when it came to skills and things to do. You could say UO was the first sandbox MMO, in a lot of ways. (UO Pictured Above)

You can definitely draw parallels between what we are doing and UO emulator shards. Both of them are run by players, for starters. Just like the UO emulators, Shards players will be able to change everything about the way the game plays. Of course, this sort of thing is not only allowed in Shards Online, but its part of the game at its core.

“Your rules” opens a lot of doors for a lot of questions, specifically PvP, PKing, and looting the bodies of your slain enemies. In UO one of the big deals was that your loot dropped when you died and you could loot the corpse of someone you PK’d. Considering “your rules” will this be something that a specific Shard might be able to setup, a universal ruleset (obviously togglable), or just PvP will not be a focus right now.

Wow this is such a perfect question! Where to begin? First, Shards is built with PvP in mind from the ground up. Sandbox has taken on new meaning with titles like Minecraft, but to us, “sandbox” means a true virtual world where players are not limited by arbitrary rules put in place to keep them on a rail.

Why can’t you attack that travelling merchant pedalling his wares in town, or another player standing in the town square? Because some game designer thought it would be annoying to build a system that forces players to deal with the consequences of doing so. With Shards, even in our very early demo, you can attack the merchant or another player if you please - do whatever you want, just don’t expect the guards to take kindly to it.

With regards to “a universal ruleset,” Shards will ship with more than one. Think of our rulesets as starting points for the ones players will eventually use to run their own worlds. We have a few ideas about what these “official rulesets” will be, but don’t want to give everything away just yet.  Gotta leave something to the imagination!

Speaking of “your rules,” what specifically are you looking at for examples of rules that players can define on their servers.  The aforementioned PvP/PK or crazier like “can build the world cooperatively” or “everyone runs 10x as fast.

Yes, yes and yes! We absolutely cannot wait to see what sort of crazy rules the players will come up with. You would probably make a good cluster god. Actually, we might just go and make a mod for our demo with 10x player speed right now. We’ll call it the Ten Ton Hammer Speed Hack!

Yes, customizing your cluster will happen on many levels. At the lowest level, you’ll be able to write custom scripts that add to or replace any piece of gameplay you want. You can completely change the way melee combat works, or create entirely new spells and abilities. You can even write completely new and exciting monster AI. Truly, we are putting all the power in the hands of those who dare.

It’s important to make something clear -- Shards is not Minecraft in the sense that you dig holes and build walls brick by brick while the game is running. Instead, behind the scenes, the gods (devs and server admins) will shape the world and the content surrounding it. The players will make their home in these worlds, explore them, fight enemies and each other for fame and glory.

Lot’s of people haven’t played UO, so I try to explain it like this: Take an open ended moddable virtual world like Skyrim, make it fully multiplayer (don’t forget to add PvP), let players run their own servers like Minecraft, and THEN connect those servers together so you can travel between them. This paints a clearer picture of the beauty that is Shards Online.

It talks about NPCs living their daily lives with or without you, or in spite of you. Could you explain that a bit more? Will NPCs have a eidetic memory of your actions and you can gain or lose favor with them or does it have a different meaning?

We have some AI enthusiasts on the Citadel team, so we have a ton of really big ideas for taking NPC AI to the next level. I don’t want to go too much in detail on this right now, but I will say this

How could we (honestly, in good faith) call Shards a virtual world if all the inhabitants just stand around at their spawn points and wait for you to get into aggro range? That is what many online games call AI.

We strive for something much bigger. NPCs should get hungry and tired. They should seek employment so they can get paid. They should find love and, perhaps, fall out of love. This is our dream. We intend to make it happen.

Check it out and register for the newsletter for all the latest on Shards: http://shardsonline.com/