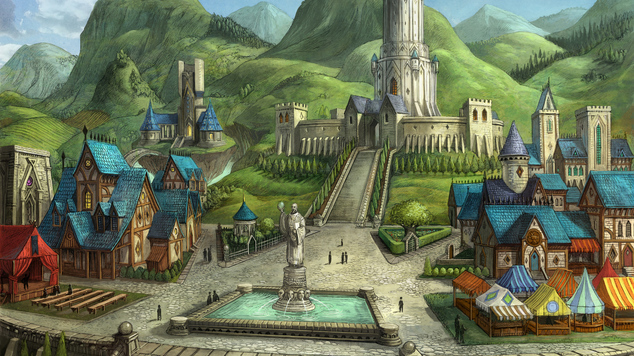 Shards Online is an interesting game in the sense that not a ton is known about it yet, but you're in luck because I was able to get some time with the wonderful development team at Citadel Studios to see the game first hand. I was given a lot of information, so I'll try to express as much of it as I can as clearly as I can.

My biggest takeaway is imagine an Ultima Online shard, minus the mixed legality and then add in some upgraded graphics, better scripting, and actual real developer support. Now, I admit, I've played a lot of Ultima Online shards before, just because it's a ton of fun to play UO with modified rules. So the very idea that Shards is just taking the idea and legalizing it is amazing.

Again, though, they're not aiming directly to be UO, and a lot of the ideas that I seen went a little bit beyond where UO is. There is definite separation, but at the same time, there is a lot of similarities. You'll have to take note that I will make a lot of comparisons between the games, but the intent from the developers isn't to emulate UO but make their own unique game with a ton of features that you would have never seen in UO.

The game is an isometric top-down action RPG. The game world isn't a single "world" but a group of servers, referred to as clusters, each one running its own unique universe. Before I get too far into trying to explain it, check out this flow-chart I made: 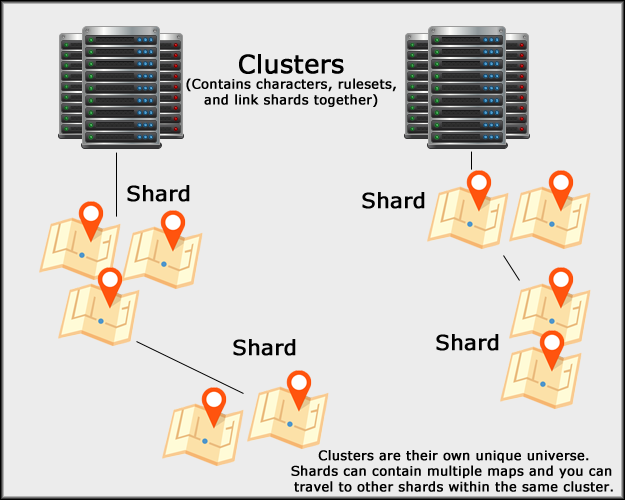 So, the game starts with clusters. A cluster is essentially the master server for a group of shards (we'll get to that in a second). The cluster contains character information, rulesets, and essentially defines the world. Within the cluster are shards, which are a group of maps that provide the adventure area. You can switch between shards using teleport portals, although with these things you betcha that there will be other ways to transverse between the two.

Now, rulesets are the game rules and the story. There are official ones, by Citadel Studios, and custom ones that players can generate themselves. For some clusters, you can have PvP on, no gold, and everything is given to you at the start. For others, it could be a standard fantasy RPG with no PvP.

In our walkthrough, we were exposed to a small tidbit of the early pre-alpha super early insanely basic this is the game in its most raw state and even then it does look impressive, especially for top-down sandbox fans. Again, imagine UO or Neverwinter Nights or Arcanum: Of Steamworks and Magick Obscura. It does use an isometric world, which is cool and I have no personal issue with.

I was able to witness some small parts of gameplay. The combat was very UO-esq and the skill system from my understanding is very in-depth, even this early on. Housing was in and it looked gorgeous, but as of right now you can't build your own house UO style, it comes with premade templates but decoration is up to you and, in addition, the option to build from scratch isn't off the table. 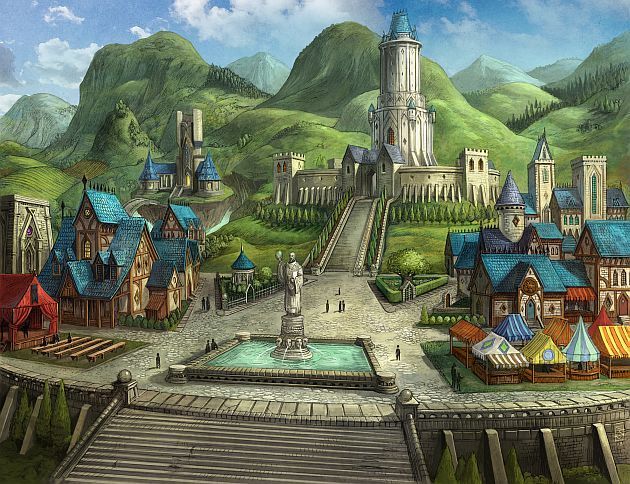 The cool part of the game isn't so much the gameplay, it's the way in which you can define the gameplay. Much like a UO shard, you can script and modify the game to your heart's desire. It's going to use standard LUA scripting.

I was shown a map that was something like "Don't Starve" or GW2's "Hunger Games" in which you had to eat to survive and find supplies. It was super cool and a really good illustration of what you can do with the scripting engine this early into development.

We wax poetically a lot about how custom content is a thing, right now. User or even procedural generated content is one of the methods MMOs are using these days to make their games more immersing. This is an entirely different beast. Imagine Neverwinter Nights for an entirely new generation. You can take their tools and assets, build out your own world, script it, then invite your friends to play. It's sort of like MMO Creator Online.

That's all without dealing with the odd UO shard developers or learning Unity from scratch. With just the features they were able to show me, you can do a lot with how you build your world out, design it, and utilize NPCs and other materials. Zombie deathmatch survival or high-fantasy social area are all possible and everything between.

One quick disclaimer - they are planning their own official world and all that jazz with their own official cluster and shards. They're going to have a complete game - the player created stuff is optional, but a big part of the fun.

That's about all I have to say about Shards from our preview so far. I'm looking forward to taking another look at the game as development continues.