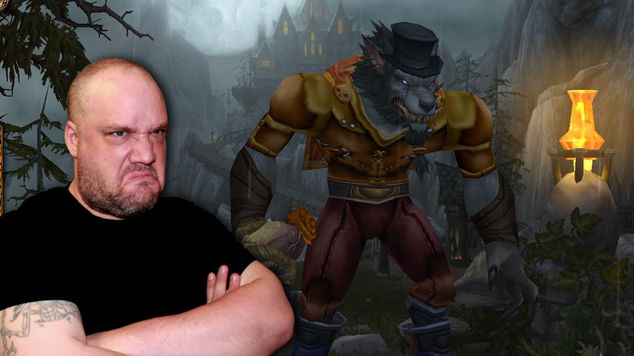 Grumpy Gamer: Sometimes We're All Noobs
The Grumpy Gamer gets a lesson in humility while playing World of Warcraft.

Not to brag or anything, but I consider myself an "expert MMO player." I don't mean that in some kind of competetive way, and it doesn't mean I believe I am The Best at every MMO and can master every skill in any game without even trying - it simply means I have a lot of experience playing MMOs because I've been doing it professionally for a while now. It doesn't take me long to figure out the controls, to learn the basic combat mechanics, to determine the spirit of the game, this sort of thing. In this sense, being an expert means I have a practiced, critical eye and acclimate quickly.

Over the years, though, I have avoided World of Warcraft for a number of reasons. I have the game installed on my computer, and I have only ever used the "Starter Edition" for getting screenshots and doing slapdash barebones "reasearch" for my articles, usually for the purposes of sarcasm. Outside of that, I have never really touched the game. I could list off all the reasons why and probably piss off all the WoW fans like I do any time I talk about Guild Wars 2, but that's besides the point. Suffice it to say, it's just never been the game for me.

The other day, I got a social media message from an old friend. I say "old" because I've known her since she was 4 years old, the daughter of a high school friend of mine, and she has - much to my shock and disbelief - grown up to be a young woman now. It's "Old Guy Brain," if you first meet someone when they're a kid, that person is always a kid no matter how much they mature. And when you hear that the funny little kid you first met when she was 4 is now 20 and has a job, you slump in your chair, stare deep into the fire burning in the fireplace, take another sip of brandy and contemplate regret. 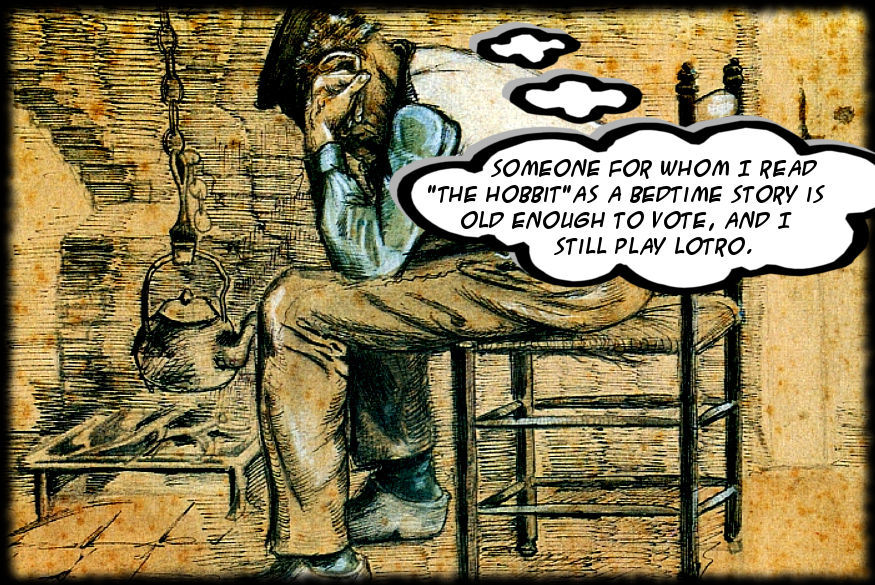 So anyway, it turns out my old friend has somehow outgrown Inuyasha cartoons and dollies, and now plays World of Warcraft. And apparently, she now uses the "F-word" casually without having to put a quarter in the swear jar, which is somehow even more shocking to me. She asked me to sign up via her recruit-a-friend thing, for which she would receive an in-game reward. I want it to be known by all and sundry that this was the sole impetus for my signing up to play World of Warcraft: I wanted my friend's kid to get something nice. The Grumpy Gamer hates a lot of things - most things, really; practically everything - but inside that black lump of pulsating bitumen that pumps the foul, hateful ichor through his slowly-decaying carcass, there is a tiny flake of iron pyrite that could easily be mistaken for gold.

Again - I consider myself an "expert MMO player." I have, on many occasions, helped out new players who were dumb, clumsy and awkward with a new game, and I have always thought to myself, "Ugh, this guy..." Veterans always feel some level of contempt for the pig-disgusting n00bz spreading their fail and awful all over their awesome game. Like when you see a melee character wearing pieces of caster armor, or some guy asking how to find a quest objective that everyone has known about since forever. You watch these guys flail around helplessly like some kind of single-celled organism spasming toward whatever unknowable goal they might have, and you think to yourself, "Ugh, this guy..."

Well, friends, when my buddy's kid showed me around Azeroth on our new Worgen characters... I became that goddamn annoying clueless n00b.

I'm about 90% positive my young friend had that same thought as I went blundering around: "Ugh, this guy..."

Really, it's a matter of comparative skill. My friend has played the game a lot more than I have - she has a couple of level-capped characters, whereas the highest level I ever attained in that game is somewhere around level 12. She knows how things work, and I have to learn as I go because I've never put any serious effort into WoW before this point. 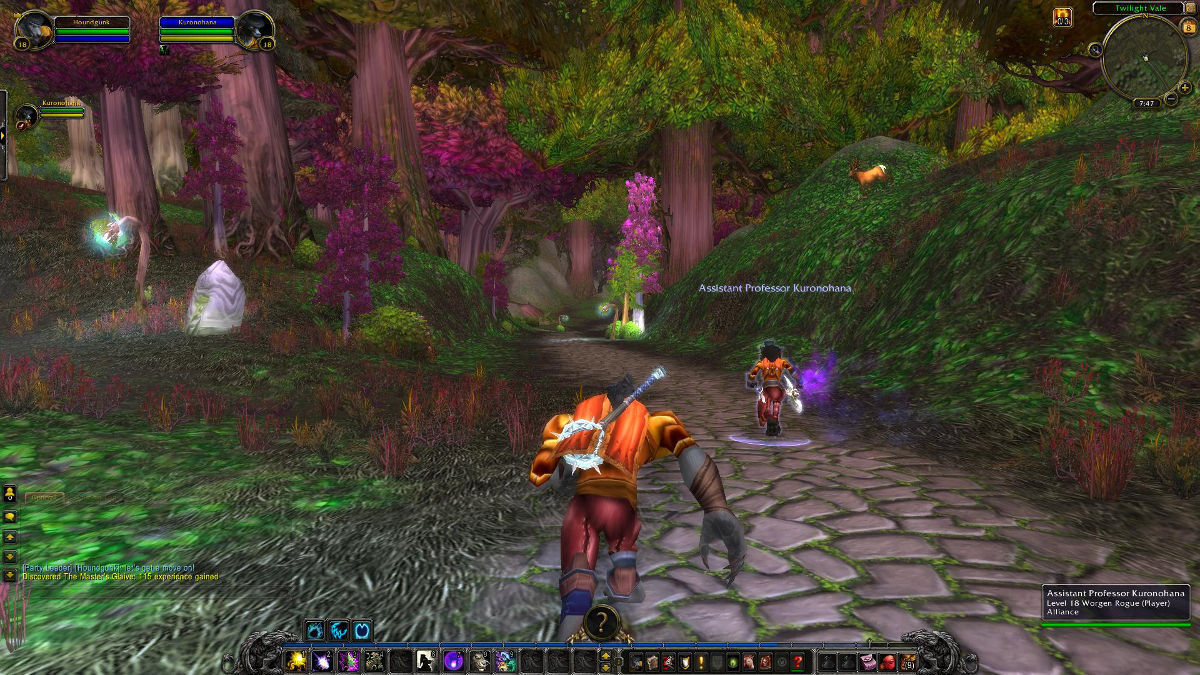 To make matters worse, it's been forever since I updated my client. Warlords of Draenor has come out since then, and they released that big character model update. So I patched until the exact point the patcher said "Playable," foolishly believed it and started playing while the patch downloaded. Because of this, I ended up getting attacked by invisible opponents several times - those mob models hadn't downloaded yet. Or we would enter a room with a quest NPC in it, and I would not be able to see the NPC to turn in or pick up a quest. So I would be standing there going, "Who do I talk to? I can't see the guy..."

It was a lesson in humility. My friend - who will forever be 4 years old in my mind's eye - utterly schooling me in a thing I do professionally. Numerous times, she had to slow down so her lumbering jackass could catch up and figure out what was going on. Numerous times, I would go blundering awkwardly into some totally avoidable peril - for instance, the mission that requires you to go up a switchback trail amidst a gang of ogres, steal a banner and then run away. She stole the banner, and I charged on in and attacked the enormous ettin guarding it, whereupon I promptly died. She very patiently explained to me that we weren't supposed to attack the ettin. Nor were we supposed to kill the rebel villager dudes a little later on, because apparently they turn into good guys after.

In just a couple of hours of playing, I must have made about a hundred "learning curve/dumb n00b" mistakes. That's how it felt, anyway. And I know how much I was screwing up because there have been many, many times where I was in her role, patiently escorting a twitchy, confused nooblet through the incredibly easy, boring content I've run dozens of times and marveling at how incredibly inept my charge was. 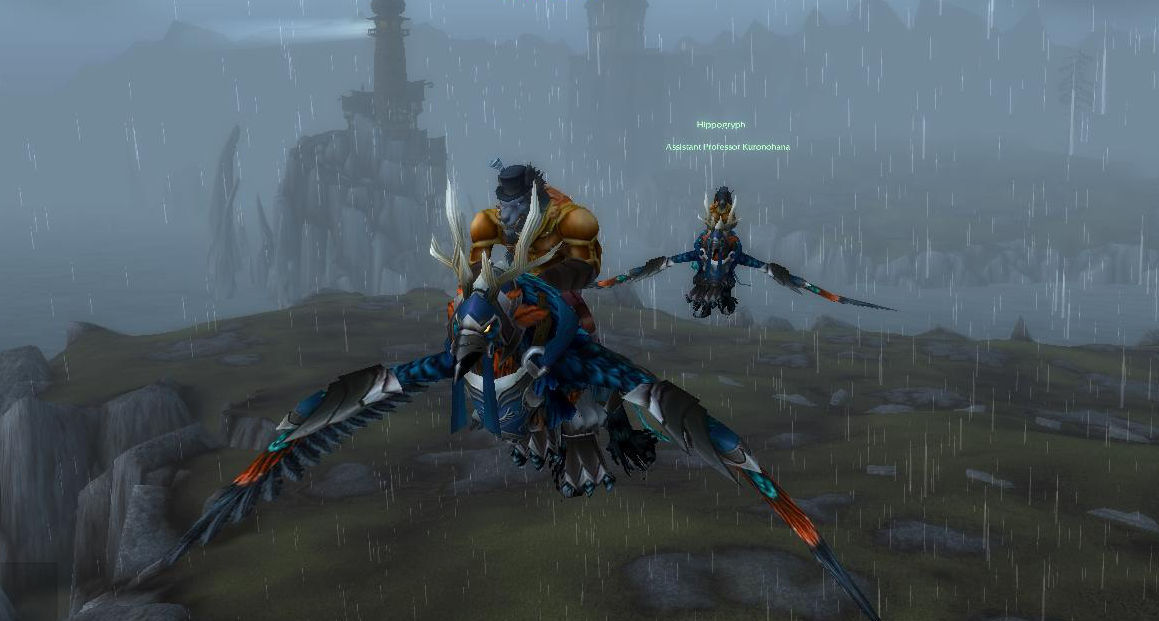 I am somewhat embarrassed by my own ineptude - especially because it's World of Freakin' Warcraft and it's a hundred damn years old - but not overwhelmingly so. Everybody has to start somewhere, and every game is somebody's first. But that's not what prompted me to write about the experience.

Had our positions been reversed - for example, if she had decided to give The Lord of the Rings Online a try, or Star Wars: The Old Republic, or some other game I know well, I'm not sure if I would have been so patient and understanding. Mostly because I am a foul, loathsome excuse for the most decrepit of human garbage, fit only to be ground up and used as fertilizer for biofuel crops, but also because, as a professional player of MMOs, I take some degree of pride in my own "elitism."

Well, that conceit, at least, has been shattered. Turns out, I am a regular chump like all the rest of you mouth-breathing meatbags. I may have a slightly different, more critical way of looking at the games I play, but I play them with no more skill (possibly much less, even) than the next guy. I imagine if I put the time into the game, like my friend has, I would be somewhere around average at it.

Meh. We all start somewhere, and apparently I was due for a lesson in humility.