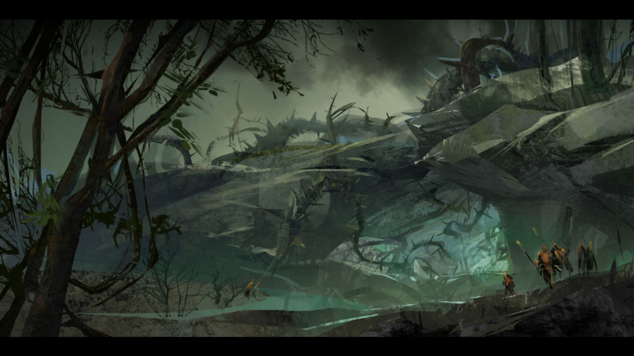 Living World Season 2 kicks off this week in Guild Wars 2, and to celebrate we're declaring this as Guild Wars 2 Week on Ten Ton Hammer. Each day from June 30th through July 4th we'll be rolling out some fresh, exclusive content for GW2 fans to enjoy in their own personal real living world. Check out the full schedule of activities below. Each day we'll add direct links to the latest GW2 content so that you can also use this page as a handy reference point.

Want to win an official "Scarlet is Dead" Guild Wars 2 shirt of your very own? We've got not just one, but two contests for double the chances to win one of 20 t-shirts we'll be sending out to the winners next week.

We're kicking off Living World Season 2 in style with an in-depth look at what the future holds for Guild Wars 2 players based on our recent discussions with ArenaNet during E3 2014.

We'll also be joining Living World game director Steven Waller in-game on Tuesday for a guided tour of the first Season 2 content. Expect to see a hefty amount of video and commentary from our sessions over on GuildWars2Hub.com later this week.

There were a lot of great updates in Living World Season 1, but how will Season 2 stack up? We'll offer up our first impressions, along with some additional thoughts on what ArenaNet may have up its sleeves as Season 2 progresses.

Livestream: We'll be livestreaming GW2 beginning at 9AM PST on Wednesday, so be sure to tune in on the official Ten Ton Hammer Twitch channel!

Rampant speculation abounds in this no-holds-barred analysis of what we think might be looming just over the horizon for Guild Wars 2 fans.

To cap the first official Guild Wars 2 Week on Ten Ton Hammer we've got something extra special planned, but we're keeping it a secret for now. Be sure to tune in to Ten Ton Hammer this Friday to find out what our mystery box content will be!

This will also be the final day for entering our Scarlet is Dead t-shirt giveaway, so don't forget to post your best images or poems for double the chances to win!

If you're looking for more info on Living World Season Two, be sure to visit our network fan site for all things GW2-related, GW2Hub.com. As always, our team over on the 'Hub will be posting plenty of guides to all the important bits of each Living World update. In the meantime, here are a few articles you'll want to check out to help get you up to speed: