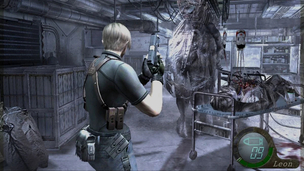 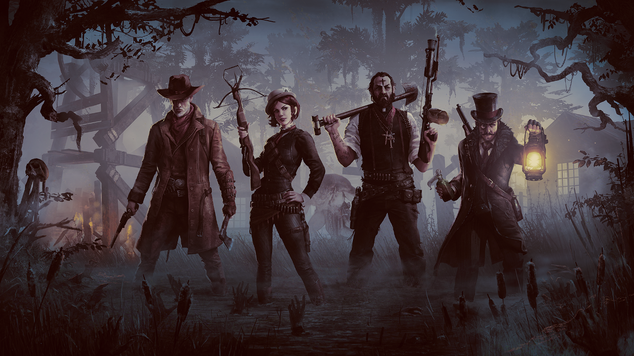 Amidst all of the E3-peening going on this year in an attempt to prove which publishing giant has the larger marketing budget for its fall release lineup, I was thankful to discover that there is still room for new titles to turn heads. One title in particular that ended up turning my head and commanding my attention long after my closed room presentation wrapped up was the recently announced HUNT: Horrors of the Gilded Age. Not only did Crytek sneak in a reveal for HUNT just prior to E3, but then also surprised us by announcing that this free-to-play title would be in the hands of gamers in 2014.

Before drilling down into some of the cooler aspects of the game that have me most excited, a top level look at what the game is and isn't seems like a good starting point.

On a super surface level you could almost think of HUNT as the result of putting titles such as Left 4 Dead, Monster Hunter, and Darksiders into a blender. HUNT has the tight mission-based four player co-op of L4D, but turns it into more of a third-person action game, and places the focus on hunting down a number of intricately crafted bosses rather than a more basic survival scenario. 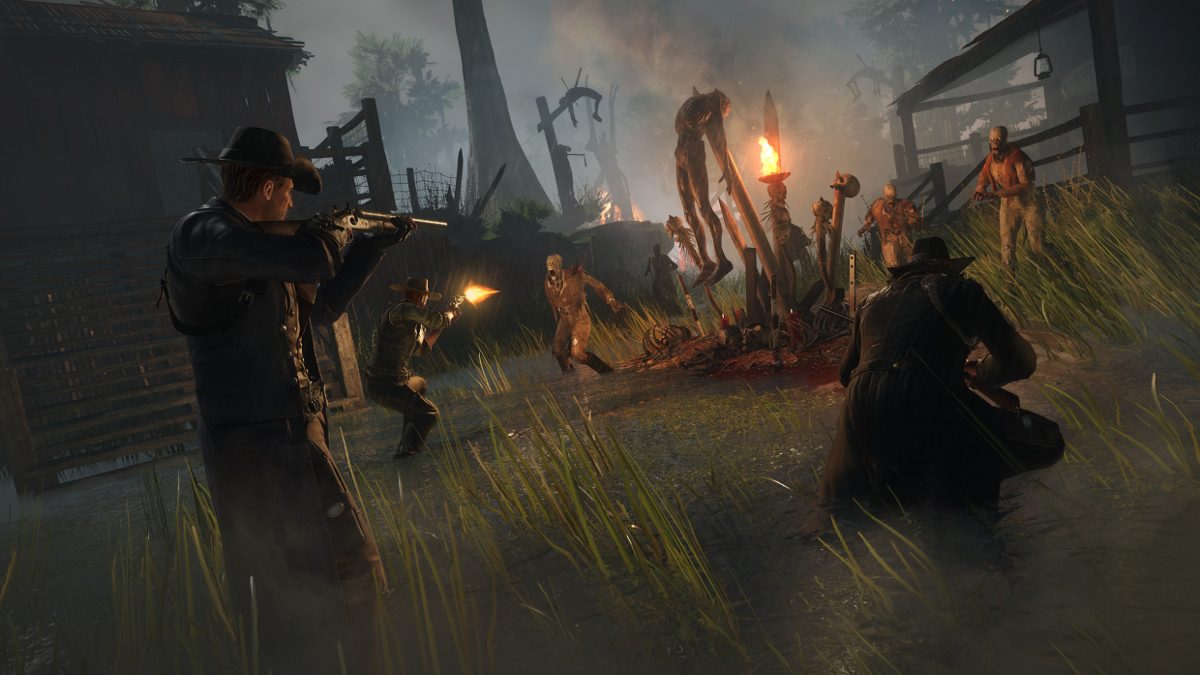 The setting also plays a large role in why I'm currently so enamored with HUNT. The action takes place in the 1800s, so there is a distinct visual hook to the game based on time period alone. However, this choice of setting also carries over to how available weaponry works, so don't expect to see tons of automatic weapons with infinite ammo stores waiting to be scooped up around every turn. If you're wielding a revolver, you'll have to reload all six chambers making it critical to pay attention to the status alerts automatically broadcast by your teammates.

As MMO gamers, we've watched as being defeated in combat has devolved into a pointless slap on the wrist with an associated coin sink. Gone are the days of having proper supporting gameplay based on the notion that combat should pose a challenge, so defeat will most likely be inevitable.

One of the most awesome things I saw for the entirety of E3 is how defeat is handled in HUNT. When you first go down, your teammates will have a limited time to heal you up and bring you back into the fight. Should you be defeated outright, you'll end up becoming almost a mini-game for your teammates instead. In one instance, a defeated character was placed in a coffin that was bound in heavy chains. The active player inside could see through a small opening in the lid rather than being encased in total darkness, and I was told you'll also have the ability to do things like pound on the lid of the coffin to help your teammates pinpoint your location. Once found, an active player simply needed to break the chains on the coffin to bring their friend back into the fight. 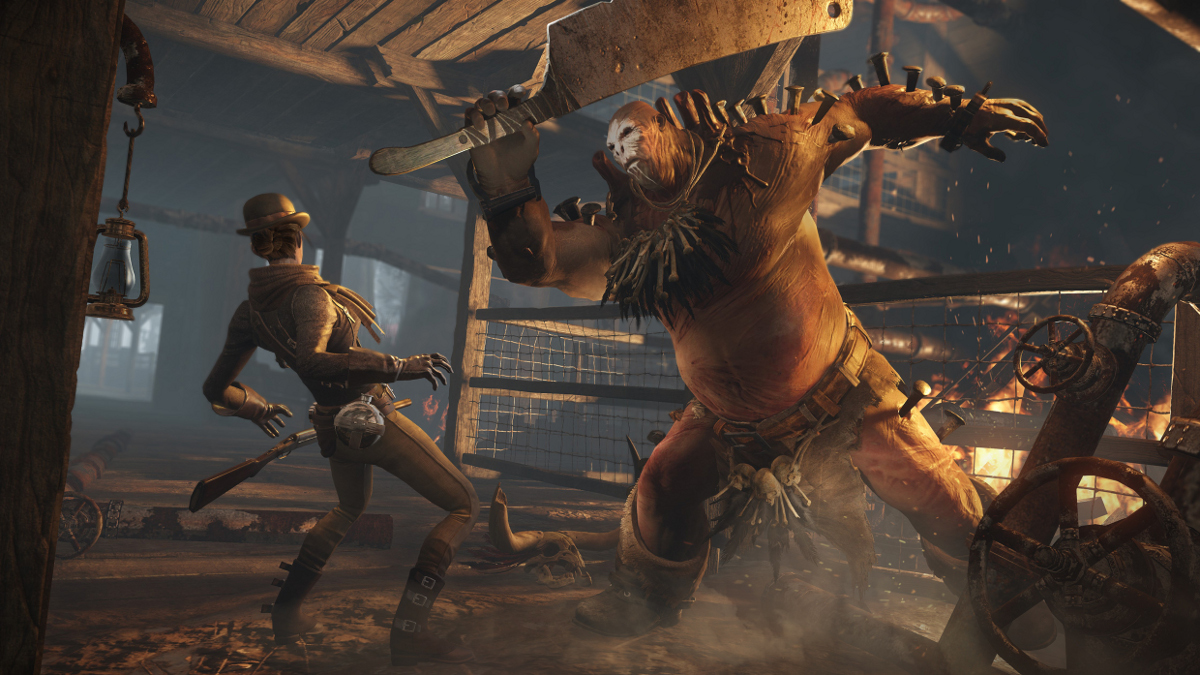 In another example, a defeated player was hung upside down from chains so retained a larger field of vision, but the trick is that your teammates will still need to figure out where you are in this scenario before they can get you back on your feet.

This may seem like a simple inclusion, but adds another layer of immersion to the experience, and I have to give props to Crytek for turning one of the less glamorous aspects of challenging gameplay - defeat - into actual gameplay.

The goal of your group on any given map in HUNT is to track down a boss that will be based on things like local myth or urban legend. During our presentation we watched as a group traversed a swamp and fended off a combination of possessed and zombified humans while tracking down a witch with some reportedly nasty powers at her disposal. The creatures encountered posed varying levels of challeng to the group, with one lumbering behemoth wielding a sledgehammer giving the group a particularly stiff challenge. On the one hand, characters seemed agile enough to avoid his slower arcing attacks, but if any of them got too close he could pull them into a choke hold using the handle of the hammer. 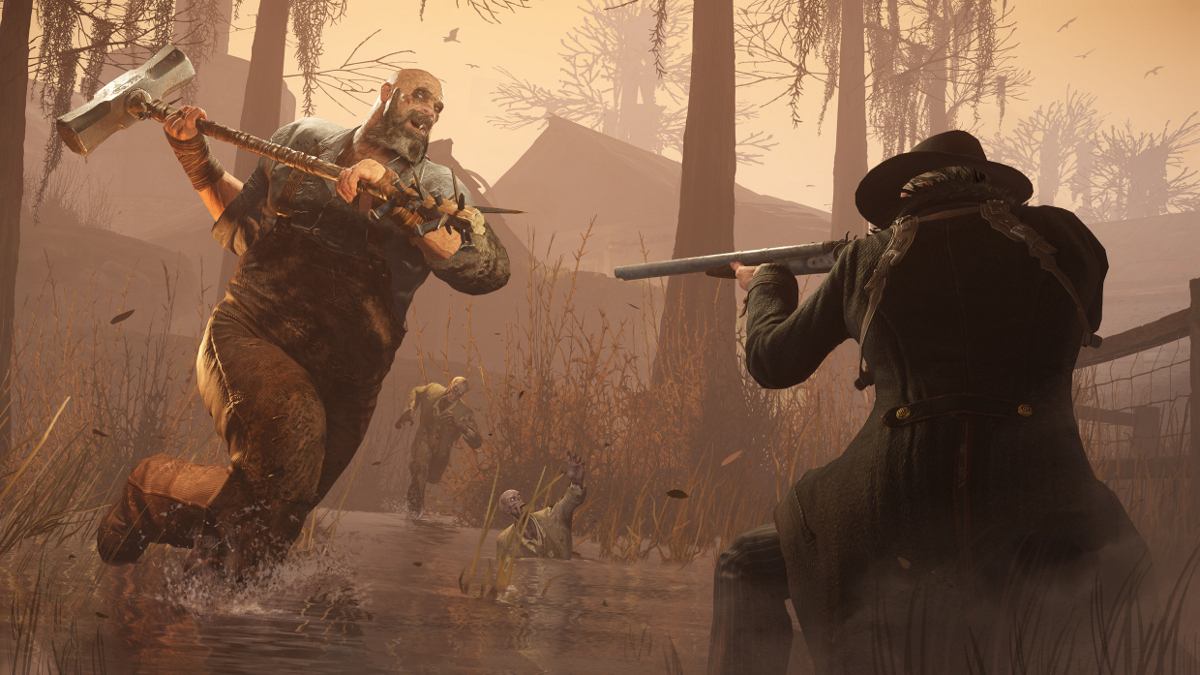 As noted above, defeat is somewhat inevitable in HUNT, so players will really want to work together in situations where these tougher creatures come into play. Long story short, you'll need to if you hope to bring down the final boss for the mission as there will no doubt be some pretty zany mechanics thrown at players for each unique boss in the game.

For the demo level, the witch boss could pull a player into a parallel plane of existence. The idea was that player would attack the witch and help make her visible (and attackable) by the rest of the group. The result was that it combined that "oh crap" moment of isolation from your group with a mechanic that was integral to successfully taking the boss down.

This type of gameplay, when combined with the slickness of the third person action elements, should resonate incredibly well with MMO gamers, especially those of us who thrive on dungeons and small group content.

HUNT was one of the major highlights of E3 2014, and instantly earned itself a place on my most anticipated games list. While the game isn't an MMO by any means, it provides a lot of the same kinds of gameplay hooks that I tend to find most appealing from the genre. Customizable, persistant characters combined with intense and challenging small group play are wrapped in some kick-ass graphics that not only helped build atmosphere, but give HUNT a very distinctive look that is absolutely rooted in its 1800's setting.

We'll be drilling down into more of the things that make HUNT tick and help reinforce why I feel the game will have major appeal to MMO gamers in an upcoming interview from the event. So be on the lookout for that, and in the meantime I'd thoroughly encourage you to apply for the HUNT beta over on the official website.

To read the latest guides, news, and features you can visit our HUNT: Horrors of the Gilded Age Game Page.